Date a live fragment: Date a bullet is an upcoming Japanese Anime movie by Geek Toys productions. It is directed by one of the famous Japanese Anime industry director Jun Nakagawa. It’s adapted from the novel series date A live by Kōshi Tachibana.
The series is written by Yuichiro Higashide under the direction of Kōshi Tachibana’s and embellished by NOCO.
The plot is divided into two parts where the first part dead or bullet is going to be streamed on August 14, 2020, and the sequel of this Nightmare or queen will available for the fans on November 13, 2020. 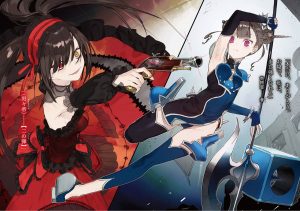 The plot revolves around Hibiki Higoromo who is known as empty is suffering from a partial memory loss(Amnesia). Hibiki Higoromo makes up in a different world, where she discovers Tokisaki Kurumi. Kurumi wants to kill Hibiki Higoromo and makes her way to a school that is very silent & unoccupied. In the school, it was found that there were several girls termed as Quasi-Spirits who come up together and which leads to war. Subsequently, all the members of the war wipe out in very few days.
Coming to the Novel, from the readers’ point of view it’s a very big hit. The first volume published in the Japanese market on March 18, 2017. It has six Volumes and every volume is interesting with multiple twists and awesome story-line up.
The plot put its first footsteps in the cinematic anime world on September 17, 2019, and became very popular for the public across the globe. Later on, many prequels are announced.