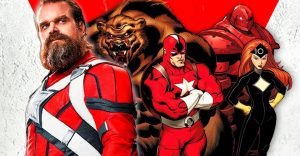 Directed by Cate Shortland, Black Widow has released in theaters and Disney Plus on 9th July,  2021. It is perhaps a prequel that shows the storyline after Captain America: Civil War. Black Widow offers pieces of evidence regarding MCU films and characters that came before and after it. The concept of the movie is based on the timeline where Avengers spilled. Black Widow also teases its audience with much more and beyond what the MCU comics might offer.

In an interview, David Harbour echoes the hints in Black Widow that link with the existence of comic superhero: Winter Guard in the Marvel Cinematic Universe. “I know a lot about those guys, the Sputnik, Crimson Dynamo, and Ursa. And, I think that if you watch the movie closely, I think you can find some stuff in there”, he added.

David further states how he sees the relation between the Winter Guard and the Avengers. He mentions, “I like this mirrored universe that these guys set up because we’ve seen The Avengers and what they can do and what they… And there’s almost direct parallels in this Winter Guard to each of those characters, like Iron Man, Captain America, Hulk, and I would like to see what a mirrored universe in that way would look like and how that would function as a larger phase.”

He is found to be playing the role of Alexei Shostakov, aka Red Guardian. There is even a fight sequel between Red Guardian and the villain, where Taskmaster copies Black Panther’s moves from the Civil War. Created by John Buscema and Roy Thomas, Red Guardian becomes a part of the Winter Guard after Steel Guardian got borne by Josef Petkus. The superhero has fought along with the Avengers while being Captain America’s Russian response.

At last, David Harbour expressed his interest in experiencing a Multiverse War where all the characters reunite for the common good.  He mentions how the concept of mirrored universe intrigues him while linking Winter Guard and all the other superheroes.

The storyline of Black Widow follows the timeline where Scarlet Johansson escapes from Sokovia Accords and encounters Taskmaster. In Black Widow, Natasha Romanoff also confronts the conspiracies that link with her past. Pruned by an anonymous force, Black Widow deals with her history as a spy.

Black Widow is directed by Cate Shortland and includes Scarlett Johansson as Natasha Romanoff aka Black Widow, David Harbour as Alexei Shostakov aka Red Guardian, Rachel Weisz as Melina Vostokoff, Florence Pugh as Yelena Belova, and O-T Fagbenle as Mason. Produced by Kevin Feige, this action-packed spy thriller has already hit the theaters and Disney plus on 9th July.