After years of studying and researching on the comic book world, we have come to a logical but inevitable conclusion.

As much as we all like Marvel Movies and the Marvel Cinematic Universe, when it comes to characterization and depth, DC Comics takes the cake fair and square.

Marvel literally poses zero competition. Marvel’s characters are based on the concepts and ideas of writers and artists while DC bases their characters on larger than life figures with tinges of relatability and the human connection.

That is why in the comic book department, DC almost always wins. The movie section is where they falter, particularly in the R-rated comedy genre.

The Deadpool franchise has earned Fox (and now Disney/Marvel), more than a billion dollars in combined Box Office and merchandise figures.

What if we say that there is a DC superhero that is better than Deadpool and DC Should start considering him for starting an R-Rated superhero comedy movie franchise like Marvel’s Deadpool? 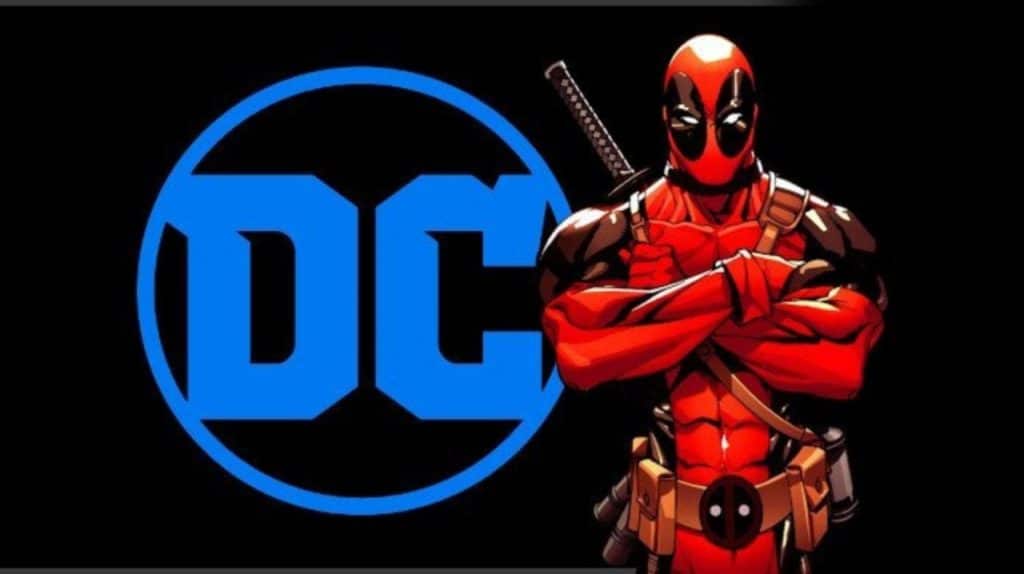 Can you guess which superhero we are talking about?

There are tons of characters you could be thinking of right now.

But the one character that would probably have escaped all of you is one that resides in a deep and dark corner of Gotham City.

This character is, more insane and way crazier than Deadpool could ever be.

We are talking about the Creeper. 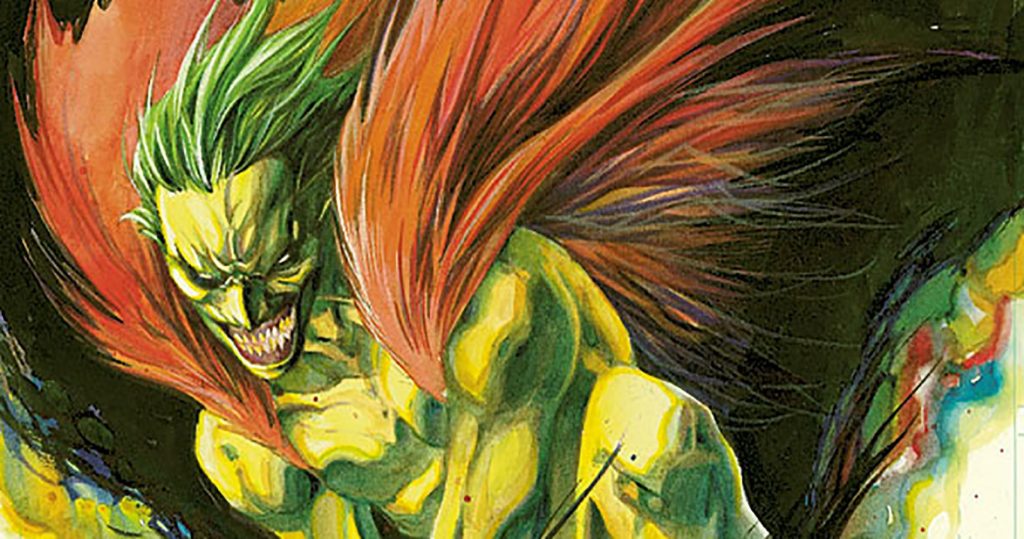 The Creeper generally receives little to nothing spotlight even in the DC Universe.

He has very little presence outside Gotham City. But trust us when we say this that this character has tremendous potential.

Despite no media exposure, we believe the Creeper could become the Deadpool of the DC Extended Universe if given a chance.

Who is the Creeper? 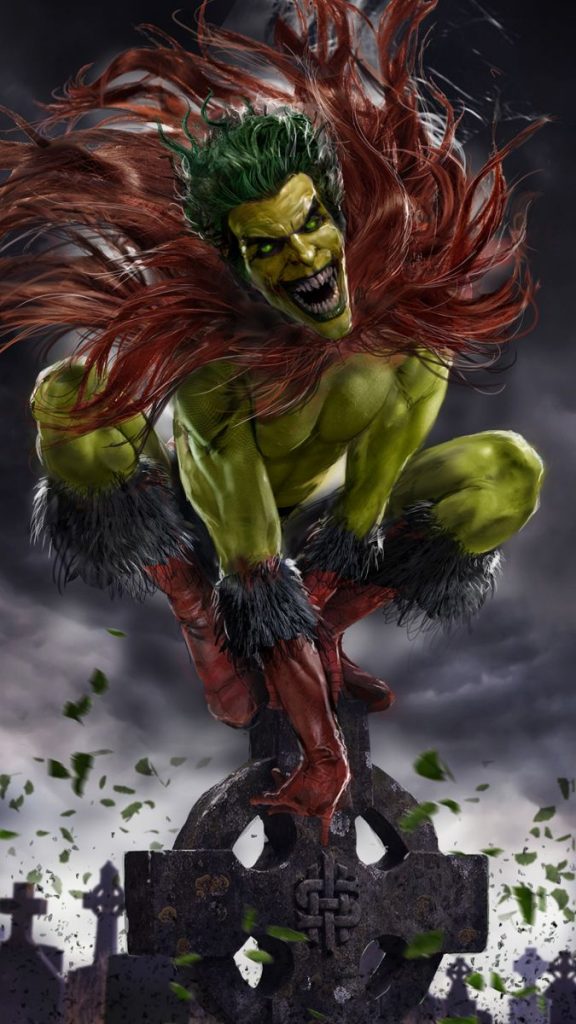 The Creeper has two origin stories that came out of the Silver and Bronze age.

In the Silver age, Jack Ryder was a television host and an investigative journalist. When he got wind of Doctor Emil Yatz, a popular scientist and now a fugitive, meeting a few shady Russian criminals, he decided to dress up as a crazy vigilante and infiltrate the meeting point.

After an accident, Emil was exposed and chased down by the Russians.

Before he was killed, Doctor Yatz injected an experimental serum into Ryder’s body and a strange device into his bullet wound.

Ryder woke up in a hospital and realized that the serum and the device gave him superhuman physical attributes. It also transformed his body into that of a creepy psychopath, hence the name.

The Bronze age gave a more accurate and believable origin story. Ryder was not injected with a serum.

Instead, he was given two device implants that imprinted on any object they came in contact with. When the devices were being inserted, Jack Ryder was wearing a crazy costume.

He had also ingested a lot of psychedelic drugs at that time. The devices imprinted on the costume and the drugs.

Now whenever Ryder called upon his powers, the devices would bring back the costume as well as the drugs in his veins.

Because of the drugs, the Creeper personality would be flooded with psychosis. The effects were cumulative which meant that with every transformation, the effects of the drugs would increase and the Creeper would become more and more insane.

Eventually, Jack Ryder developed a split personality – the sane Ryder who was a journalist and TV Host and the Crazy Creeper, whose idea of fun and games was very, very different. 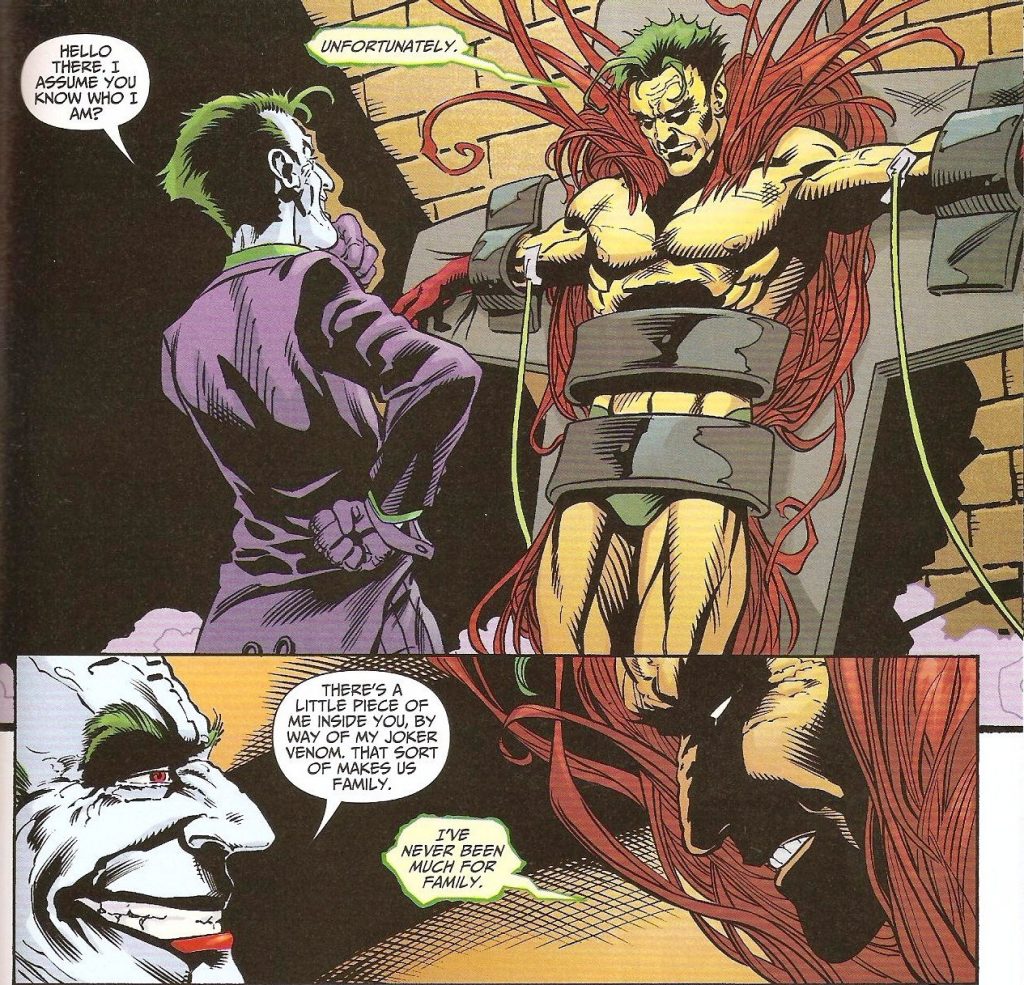 The Creeper is basically a mix of Deadpool and the Joker. He is a little loose on the top floor. The Creeper possesses superhuman strength, speed, agility, reflexes, and endurance.

His laugh can cause an insane amount of pain to whoever hears it. Moreover, the Creeper does have a powerful hand to hand combat style.

Like Deadpool, it is disorganized and unpredictable, relying on the user’s volatility and insanity to throw their opponents off guard.

The similarities between Deadpool and the Creeper run deep. Both have a very powerful healing factor.

Like Deadpool, the Creeper has been inflicted with deadly injuries that he has healed himself of in a matter of seconds.

Both have a vague idea of the Fourth Wall and know they are actually characters in a comic book. The Creeper is also not trusted as much by his own superhero colleagues.

Deadpool has been a part of many superhero teams like the X-Men and the X-Force. Wade is never given any important role and responsibilities because everybody thinks he is too unstable to be trusted with anything. 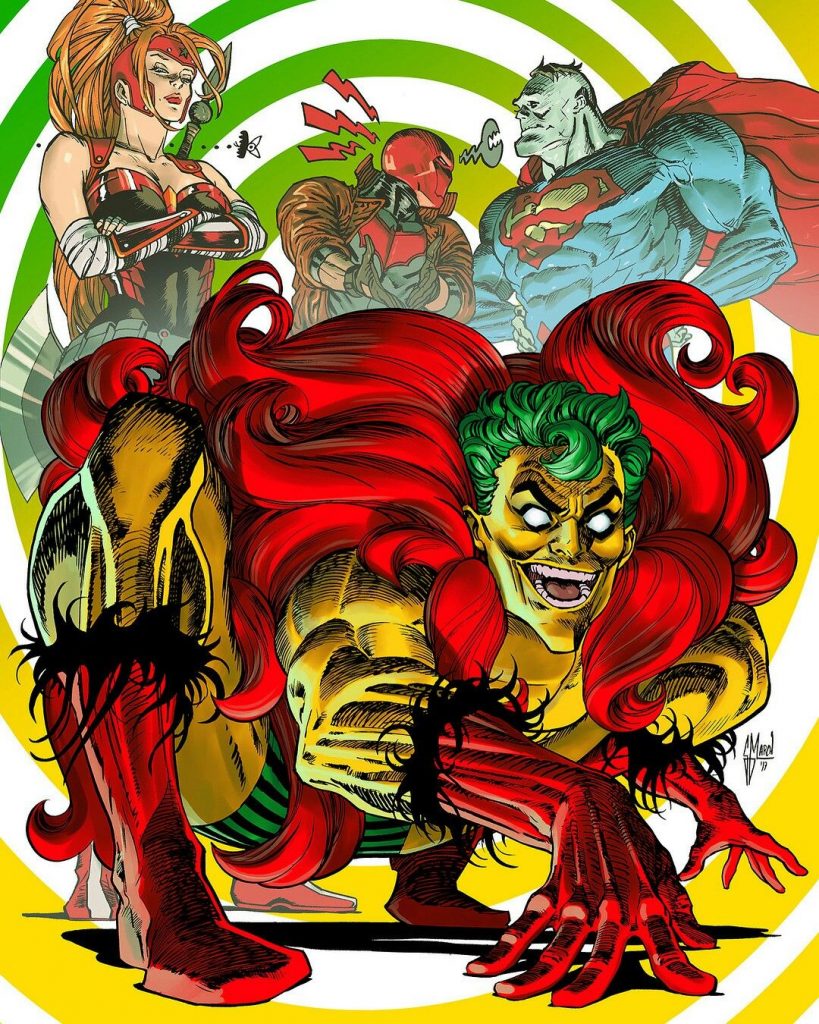 There is one more reason why the Creeper should be considered by DC for making Deadpool like movies. He has some great stories to tell.

Like Wade Wilson, the Creeper has had strange little adventures.

He has fought the Bat-Family as well as an impostor of Slade Wilson aka Deathstroke because he felt like it.

We would go so far as to say the creeper’s creepy tales are actually sometimes even more hilarious than Deadpool’s.

The Creeper shares a lot of similarities with the Joker. In fact, in the modern age re-imagining of his origin story, Jack Ryder got his powers after being pushed into the same vat of acid the Joker was pushed into.

Ike the Joker, the Creeper has a knack for being flamboyant and flashy. He likes to make an entrance and have the last laugh. 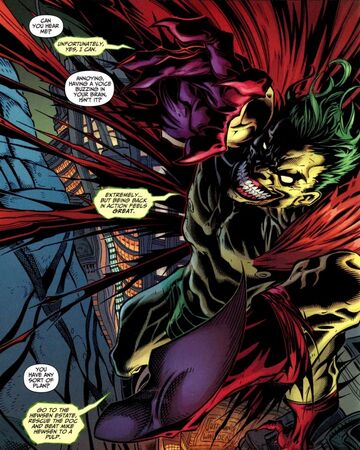 If DC Comics does consider the Creeper as a new character to explore, we suggest they go with his exploits along with Batman and the Outsiders.

They do not even need to go for a live-action adaptation. The Creeper will still be a hit if they make an animated movie out of it.

DC Could make an official canon DC Animated Universe for R-Rated movies. The Creeper could be the first addition to that label. Marvel has already proven that superheroes do not need to be famous for their movies to be a hit, case in point – Guardians of the Galaxy. If the Creeper could do the trick for the DCEU, it would be a welcome measure.

Related: 7 Ways the Snyder Cut Could Start a New DCEU

We have all seen the Justice League and the flagship DC Heroes in action again. While we appreciate the fact that DC finally allowed Joker to have a solo movie, he is still a mainstream villain.

There is literally a universe out there for DC to explore. An R-rated comedy movie based on the Creeper would be a step in the right direction.

4 Epic Alternate Versions of Thor (& 4 We Want To Forget) 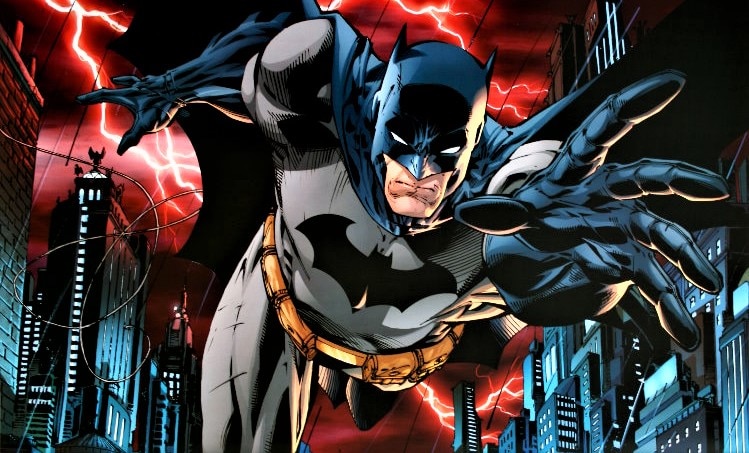 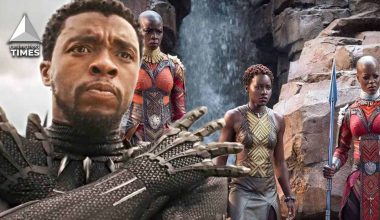 Read More
Black Panther 2 has faced so many challenges over these years to finally be ready with the film.…

Read More
The Marketing campaigns of every MCU film are just amazing! It is really fun to see familiar MCU… 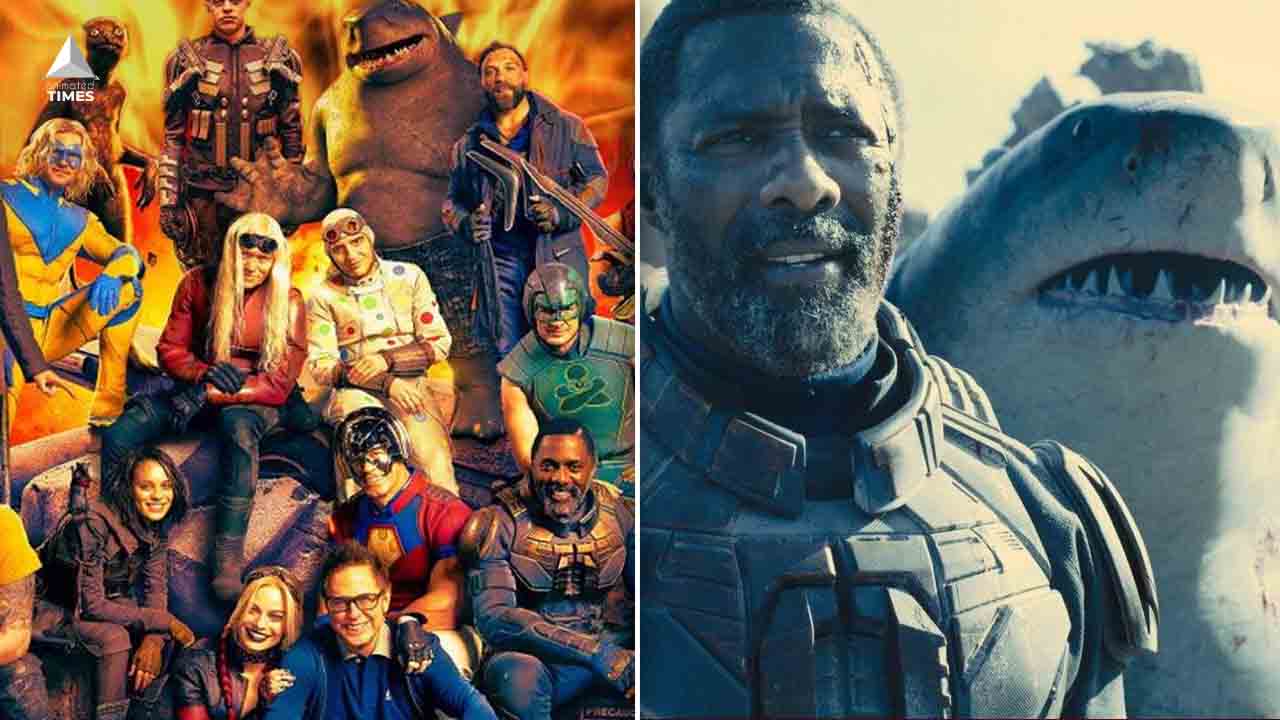 Read More
Looking forward to a sequel of The Suicide Squad? Here is all that we know about it. James…