CW’s Arrowverse timeline could be hard to keep a track of, but one fan’s observation may have just made things more confusing.

Reddit user Furore910 shared a screenshot recently from the first season Arrow. Here, Patrick Sabongui can be seen playing a drug dealer who gets killed quickly. There is some irony, as Patrick has since gone on to reprise Captain David Singh on The Flash.

Obviously, this isn’t the first time The CW has used the same actors across multiple shows on the network. Arrow and The Flash are set in the same universe, making things more complicated. Sabongui also played a soldier in the episode, “The Huntress Returns.” 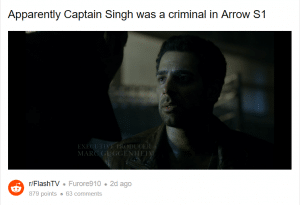 Either way, arguably his best Arrowverse role is as David Singh, an openly gay police captain who is set to become the governor in the future.

“I always knew it was important.” Sabongui said in a recent interview with FanSided. “I always knew that just the existence of Captain Singh was making an impact. And then when the episodes started to air and people started to find me on social media, I would get every now and then these direct messages from kids, and I get moods when I think about this, but like kids in the Midwest or kids in the Deep South sharing with me their stories of discrimination and saying ‘I live in this really small town and I don’t feel the same as everyone else but I could never tell anybody. So seeing Captain Singh, you know the strong character in my favorite show, makes me feel that I’m normal. Makes me feel that I’m okay’ and I’m like, that is so real to me.”

“Some kid entrenched in this community that doesn’t accept him or her can see themselves represented in Captain Singh either because of being a visible minority or because of his sexual orientation and feeling like they identify. That could have untold effect in that child’s life.” Sabongui continued. “That is real, more real to me than any contract or any ratings or any other kind of success. That is affecting somebody’s life that may not have found that they feel okay in their identity until you know maybe I can contribute to it. So it’s one of the highlights of my career, honestly being able to be part of people’s experience that way.”