The new Flash#49 is out, and the series has finally answered one of the biggest mysteries of the Flash universe. The new series, by creators Joshua Williamson, Howard Porter, Hi-Fi and Steve Wands has provided some interesting answers to the question. “Flash War” is a deeply moving story of how the father Wally West tries to save his kids from the evil Speed Force, while the other Flash Barry Allen tries to protect Wally by telling him about his own mistakes. At the same time the comics will answer to the question that fans have had for a long time: Who is the fastest man in the universe? Barry or Wally? In the penultimate issue to the series, Barry chases Wally in an attempt to stop him. Stakes are high on this one – only one of the the two heroes can win and whoever wins will be decidedly faster than the other.

If Barry wins, Wally may really end up losing his children. On the other hand, Wally may actually outpace Barry and break all the laws of nature as we know them. This fight for the mantle of the Fastest Man in the Universe was always contentious. Jay Garrick, the earliest Flash, could run at the speed of sound, which is almost next to nothing now. However, that was done without access to the pool of power that is the Speed Force. With it he was much faster but the effect of his aging began showing up in his maximum speed. During his time as The Flash, Barry Allen was a force to be reckoned with, and he was the fastest Flash there ever was. After he dies during the Crisis On Infinite Earths, the first of all the crisis, Wally West took over for his uncle Barry. Wally found it hard to go past his uncle’s top speeds, and was significantly slower than his speeds as Kid Flash. Eventually it was revealed that Wally believed that if he was faster than his uncle he would be dishonoring his sacrifice, and it only took the supervillain Eobard Thawne to show up that Wally finally accepted that by going faster he was only honoring the legacy of Flash that his uncle Barry had built and not overshadowing him or lessening his sacrifice. Using the speed formula by Johnny Quick and words of wisdom from Max Mercury, Wally breaks past the barrier and beats Eobard, hence becoming the new successor and officially the Fastest Man Alive. 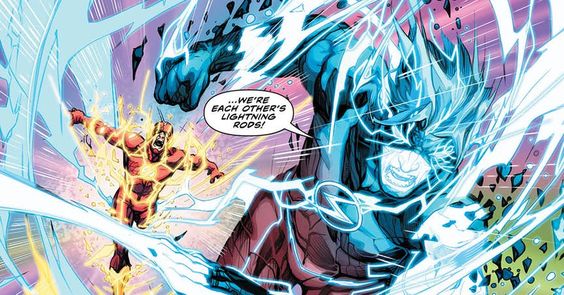 However, it was not Barry or Wally that were the fastest in the universe but rather Bart Allen. He was Flash for a relatively short period of time and appeared in Flash: The Fastest Man Alive. When Crisis on Infinite Earths happened, the four Flashes at the time got together to try and run the supervillain Superboy Prime into the Speed Force. However, the Kryptonian rascal is able to come out of the Speed Force and it was Bart who followed him out of there. He had aged to late 30s and now had the powerful Speed Force inside of himself. This allowed him to power his own self into unbelievable speeds that neither Barry nor Wally would ever have. Eventually, the heroic Bart was killed by Inertia and the Rogues and the Speed Force was freed. This let Wally and his own family come back after having been on sabbatical in an entirely separate dimension. Also there have been faster Flashes out in the multiverses of alternative timelines. John Fox from the 27th century and who later moves to the 853rd, could have bettered Bart’s speeds, or at least matched it, because he was part of the Justice Legion A and would have to be that fast in order or keep with his counterparts. The fastest ever Flash was probably Wally West of the Kingdom Come who is said to have been so fast that he eventually left his own body to simply become a ghost that went around its city in a blur and kept it safe.