DC Comics Batman ’89 comic continues to build on the lost plot points of the Tim Burton universe since Billy Dee Williams’ Harvey Dent suffered from an accident which will turn him Two- Face villain.

In Batman ’89 #2, Dent attempts to save Drake Winston but after entering a building which is set on flames, he falls and was knocked out as acid and flames make their way to him. 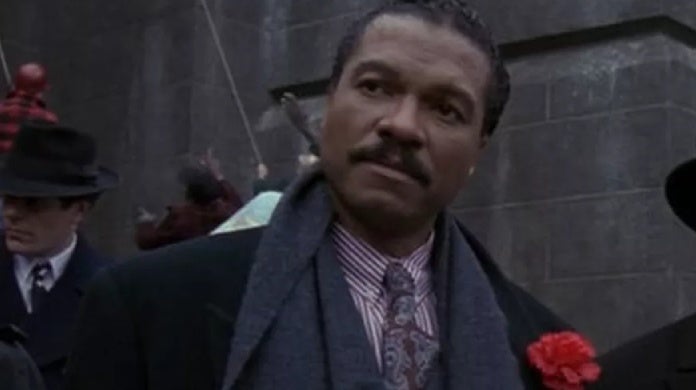 The legendary actor Billy Dee Williams played Harvey Dent in Batman, whereby the character promised to help with the crimes in Gotham City as the Joker became a major threat. But it was not revealed how did he transform into the Two-Face and he didn’t reappear in Tim Burton’s Batman Returns; but was recast as Tommy Lee Jones in Joel Schumaker’s Batman Forever.

In the comic Batman ’89 #2. Harvey Dent visits Burnside aka the place where he grew up. The story goes on to intertwine with Drake Winston aka Robin who is a mechanic servicing Dent’s vehicle. Dent seeks out Drake’s photographic memory for car parts to help him get leads on the Batmobile but is met with resistance for being a cop – as a curfew and the National Guard has been deployed across Gotham City to stop Batman.
Dent then receives a pushback from the GCPD over comments he made about people of Burnside being treated differently  with one cop lighting the garage he was just at on fire.
Dent tries to save Drake who is inside but he is knocked out after tumbling down the stairs. As a result Dent’s face lays on the ground as battery acid and fire race towards him.

It looks like that Dent will see the side of his face all burned off by the flames and the chemicals which will lead him to become the Two- Face villain. It is a set up for the villain as Dent was causing some honest changes in his city.
And possibly we all will see soon how this particular incident lead him down a darker path.