The most popular Speedster of the comic universe, the Scarlet Speedster, Barry Allen, aka the Flash is about to get much much better. In the upcoming DC Comics The Flash#53, Barry Allen won’t just be the fastest man alive. He would be the strongest and the mightiest man alive. 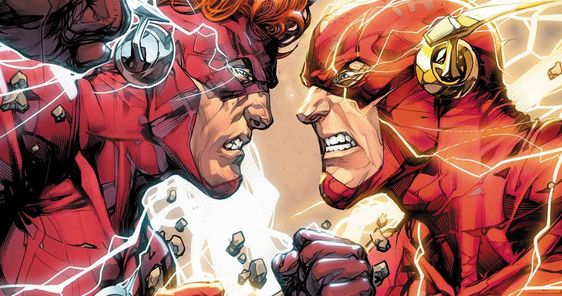 But how? Would he be even more powerful than Superman? Apparently he is about to receive a “jolt” from a new force. We know that the shattering of the Source Wall in DARK KNIGHTS: Metal, released a lot of cosmic charges. Maybe that was what triggered this “Strength Force” in Barry.

This change is about to come to Barry in an arc “The Grips of Strength” which would kick off in August in The Flash#52.
Flashes from 52 different worlds along with the Trickster and Commander Cold will be the centre characters for this issue.

THE FLASH #54
written by JOSHUA WILLIAMSON
art by CHRISTIAN DUCE
cover by DAN MORA
variant cover by HOWARD PORTER
The Flash is now the strongest man alive thanks to a jolt from one of the new forces! Turning his jacked-up sights to Trickster, the two duke it out inside Iron Heights for utter supremacy. Will anyone stop these two behemoths from beating the hell out of each other… or is this just what Warden Wolfe wants?
ON SALE 09.12.18
$3.99 US | 32 PAGES
FC | RATED T
This issue will ship with two covers.