Demon Slayer is one of the impressive anime having magnificent Swordsman. They can kill the powerful demons with just their Nichirin blade. Further, most of them passed the entrance exam to join the army of Demon Slayer in the initial Episodes. Every cast member contributes equal efforts in bringing down the demons and saving Earth’s living soul.

It is the story of a boy named Tanjiro whose family got killed by demons. And converted her sister Nezuko into the monster. Later Tanjiro acquires exceptional powers to fight with demons. Fans have already separated their favorite character. But despite this, here is the rank of main characters from strongest to weakest.

The main character of the Demon Slayer series is the strongest one. Initially, he was not persuasive that much. Despite this, he fights against every odd that comes in his way. Additionally, his power of smelling plays a significant role in enhancing his ability.

Later, he took training under several Hashira members, including Sacongiri Udozaki (former Hashira member). Sacongiri converted him into an undefeatable warrior. Tanijaro even defeated Kanao in the latter part of the series. He even gained the strength of beating even the strongest demon.

Giyu Tomioka is a fundamental member of the Demon Slayer group. He is the person whom the main protagonist has to catch up with; His most robust quality is Calmness. Whatever be the situation, he appears to be calm and composed.
Additionally, his water Pillers techniques are graceful. He always seems to be in control of himself irrespective of the situation’s seriousness. Giyu’s powers placed him to the upper demon Slayer level and put him in the position of top demon Slayers.

3. Kanao: The Strongest one- 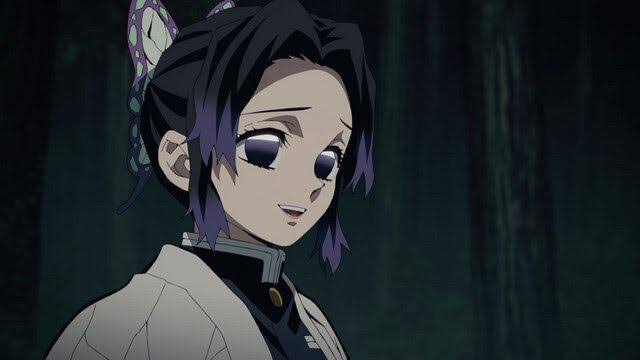 Kanao appeared late into the Demon Slayer series. And tried to Kill Nezuko due to her demon nature. She was trained under Shinobu and Kanae and played a crucial role in the latter part of the series.
Her Special ability was Advanced vision; which helps her to avoid attacks in advance of the opponent even wanting to attack her in the first place.
Kanao’s exceptional fighting ability permits her to go head to head with Upper demon moons, even Muzan( demons head) as well. She mastered her skills at such a level that she can even beat a few Hahira. Yet Tanijaro defeated him in the later arc of the series.

Genya hasn’t appeared continuously in the series. Several Demon Slayer fans did not remember him. At First, he appeared during the entrance exam and went off his by himself. Later in the series, he appeared with the Strange power in which he eats demons to gain their abilities and strength. Additionally, he operates both Demon Slayer sword skills as well as Blood Demon Arts.

Shinobu kocho is one of the principal characters of Demon Slayer. She makes her appearance lately in series when Tanjiro was battling against lower demon moon. Shinobu has enormous knowledge. which she uses during contesting against demons. As a Pillars member, she isn’t quite as strong as some of the other Pillars. And uses to Kill monsters by layering her swords with poison. This poison damage demons cells and slow down their regeneration process.

Yosuke is the First human character Tanjiro fights and the second Swordsman whom he met in Demon Slayer. Pigs raise him and the majority of the time uses Beast breathing as a fighting style. He operates the pair of ruined swords with serrated edges during the fighting. Despite his new Special Nichirin blade, he demolished it to fit in his style. And managed to fight with multiple upper ranked demons during the series and came out as a winner. But his short-tempered and risky nature sometimes led him in trouble.

Zenitsu was the first Swordsman whom Tanjiro met. Zenitsu is trained under his grandfather and learned thunder breathing style from him. Although he retained the thunder breathing technique due to his weakling nature. Further Zenitsu mastered it than any other Demon Slayer. In due course, he developed his seventh form technique, which winds up being the most potent Thunder Breathing abilities. Additionally, due to his Coward nature, his power was somewhat inconsistent and has to be Unconscious to activate any of his power.

Disclaimer: The ranking of Demon Slayer’s main characters is As per our Point of view.