Olivia Wilde has been in the news with her recent movie Don’t Worry Darling. Adding to the controversy, a video circulating on the internet shows Harry Styles reportedly spitting on his co-star Chris Pine. Thus, the video does not directly show Harry Styles spitting, but the reaction by Chris Pine shows him getting upset.  The star cast of the movie is traveling for the promotions and their premiere at Venice Film Festival made a lot of headlines. The feud between the actress of the movie, Florence Pugh, and the director Olivia Wilde has been the talk of the town, but the world of the internet has found a new video to talk about! 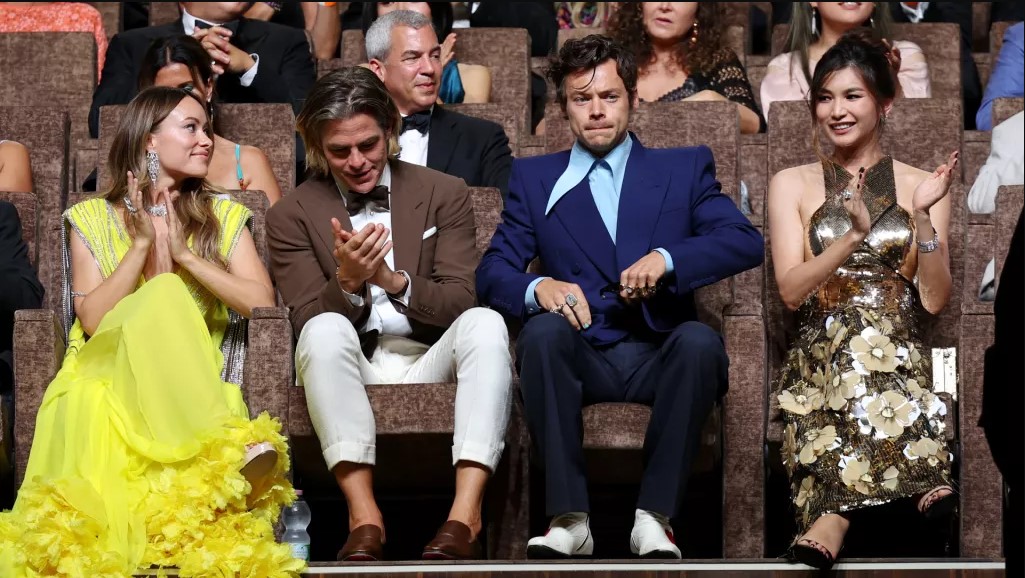 First, it was the actress Florence Pugh who did not show up at the premiers, this time it is Harry Styles making the news. The world of Twitter seems convinced that the Former One Direction Singer is influenced by toxicity from his partner Olivia Wilde. As the video of Harry Styles reportedly spitting on Chris Pine was all over Twitter, the netizens heavily debated the controversy around the Don’t Worry Darling movie.

#HarryStyles appears to spit on Chris Pine i won't sleep until i know the truth pic.twitter.com/wLXjIHTYgU

While reacting to the video, a user seemed confused as he watched the video multiple times and could not decide what happened.

Another user added claimed that Harry Styles blew at him and did not spit.

I think he blew at him, but not spit. But it must be an inside joke or something.

“looks like it’s a no”, a user claimed that he did not spit.

Another user posted a video from another angle and asked, “Did you see the other angle though?”

Did you see the other angle though? https://t.co/48HeRbAUdY

A fan of the former One Direction singer supported and added, “harry is super polite”

Amidst the recent controversies, a user noted a “massive tension between them”

During the promotions, Chris Pine has been seen irritated and annoyed with Harry Styles. He was seen making awkward reactions while the actor was interacting with the media. Ahead of the theatrical release, the movie has made various headlines.

Directed by Olivia Wilde, Don’t Worry Darling starring Harry Styles and Florence Pugh has been scheduled to release on 23 September 2022.