The upcoming Marvel Studio Series on Disney+ aka She-Hulk is the buzz of the town. But the rumor that has gotten our attention is that it might feature MCU’s next appearance of Howard the Duck.

Thanks to the keen observations of the fan who posted the same on Twitter! Recently, Picsou Magazine, the French Publication ran a detailed story that blessed the fans with interesting information about the talking duck.

After some rough translation, we can figure out what it says! After his marriage to Darcy Lewis from Marvel Studios’ first animated series, What If…?, the article drops a little but an exciting hint!

Here’s what it says:

” [T]he She-Hulk series, which arrives this year on Disney+, could reserve some ‘what the duck’ surprises! This should delight lovers of this rambunctious duck, determined to do as he pleases.” 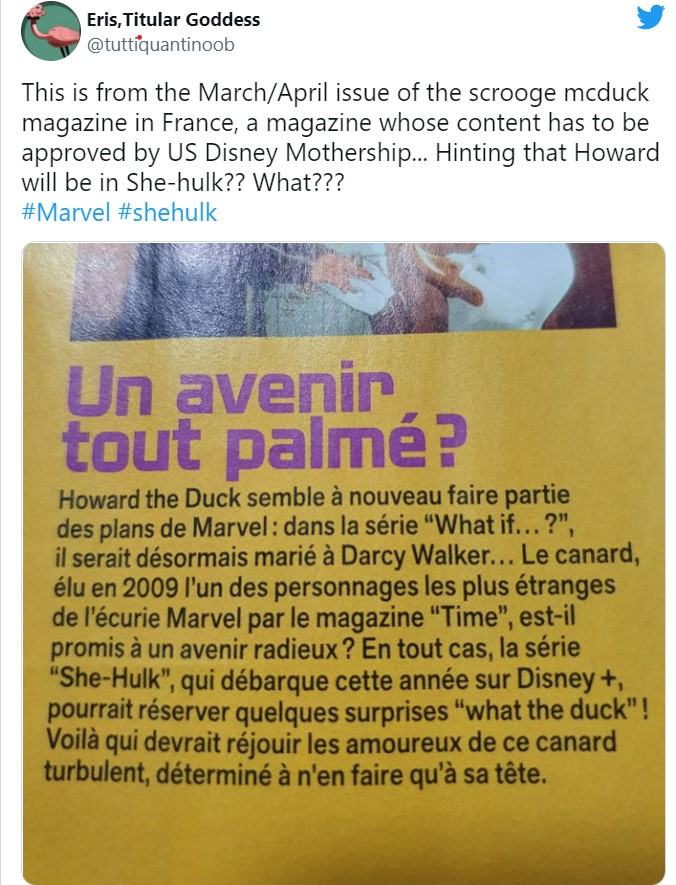 Picsou Magazine seems to be quite dedicated to the doings of Scrooge McDuck or Balthazar Picsou as known in France. Balthazar Picsou means coin-pincher. Disney has licensed the magazine to produce and distribute Disney comics in France!

The full text of the article (loosely translated) reads as such:

“A webbed future? Howard the Duck seems to be part of Marvel’s plans again: in the What If…? series, he got married to Darcy Walker (sic)… Does the duck, elected in 2009 as one of the strangest characters in the Marvel team by Time magazine, have a promising bright future? In any case, the She-Hulk series, which arrives this year on Disney+, could reserve some “what the duck” surprises! This should delight lovers of this rambunctious duck, determined to do as he pleases.”

Marvel Comic fans are well versed about Howard and Shulkie’s history. So whether Howard will really show up in Marvel’s upcoming live-action series and to what extent, your guess is as good as ours!