With the current generations shift towards online dating, there’s always an element of “shooting your shot” – whenever, wherever and whoever. A recent viral tweet containing the screenshots of a conversation between a Disney+ user and a customer support worker is certainly a testament to the phrase “shooting your shot”. It certainly never hurts to think outside the box when it comes to this customer support live chats.

On Friday, Twitter user @triplekatherine sought the help of customer support through the Disney+ app. Her request was aligned with the need to kick out her ex-boyfriend out of her account, the reason being that he shouldn’t be able to watch the recent episode of The Mandalorian. The conversation continued between the two, with the twitter user and the support staff becoming friends on Snapchat. Nobody knows what happened after that, but at least she didn’t get rejected! 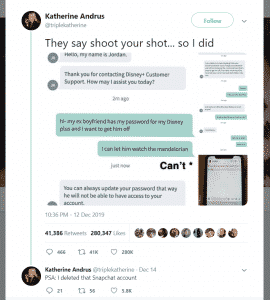 The tweet certainly received the attention it deserved, with almost 41,000 retweets, and over 278,000 likes. The Twitter user was eventually forced to shut down the Snapchat account she shared to the support staff, given that she had revealed it through the screenshots.

It’s barely been a month since Disney+ became available to the general public, and already, the platform got over 22 million downloads. It exceeded the expectations of many who were active Disney partners, even the CEO of Verizon. Hans Vestberg recently commented that “It beat our expectations, even though we had high expectations.” The successful launch of the platform brought great benefits to Disney CEO Bob Iger, who was named Time’s Business Person of the Year. “This has been probably one of the most productive years we’ve had as a company in the 15 years that I’ve been in this job,” Iger explained recently. “This time last year, we had not closed the deal for Fox. We had not opened up two Star Wars Lands, we had not launched Disney+. We had not closed the deal for control of Hulu.”