Exclusive: Hayley Atwell reunites with MCU as Captain Carter in Marvel and Disney Plus series What If…?. Is she going to get a dedicated role in Doctor Strange 2 as well? Here is everything that you need to know.

Hayley Atwell joins the Marvel Cinematic Universe as Captain Carter in the Marvel and Disney Plus series, What If…?. While this Multiverse variant is expected to treat MCU fans with her presence in the upcoming Marvel animated series, it is also likely to be playing a crucial part in Doctor Strange 2.

Animated Times has come to know through a trusted source that Hayley Atwell will be playing a significant role in Doctor Strange in the Multiverse of Madness. While the character has stayed longer in the comic series of the Marvel Cinematic Universe, the screen time that Captain Carter will be getting is still not confirmed yet. In contrast, it is highly expected that the character of Haley Atwell will be highly crucial for What If…?.

With that said, there is a strong proof that Hayley Atwell has a role in the upcoming Marvel and Disney Plus series, What If…?. In the trailer, there is a scene where Captain Carter is found to be fighting the giant tentacles. These tentacles in the scene look like the ones from Shuma-Gorath that are perhaps the strongest villains in the Marvel Universe. It might allow the MCU fans to acknowledge the villain of the upcoming MCU film, Doctor Strange and the Multiverse Madness. Thus, this confirms that Shuma-Gorath could be the “Big Bad” of the film. Here is the animated version of Hayley Atwell fighting Shuma-Gorath in the trailer of What If…? – 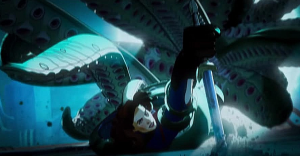 As the Marvel Cinematic Universe finally introduces the concept of Multiverses, Captain Carter is expected to become more of a prominent character for the series. Undoubtedly, Peggy Carter has passed away in the Sacred Timeline, but Hayley’s character has decently influenced the fan base. Hayley Atwell has made the righteousness of Captain Carter more indelible. There pops a lot of questions regarding her role in Doctor Strange 2. Some of them include: Will Hayley Atwell appears in Doctor Strange 2 just to get killed off? Or will she be the one fighting alongside Captain America? Is she going to get a role in Captain America 4 as well? Whatever the answers would be, one thing is sure, Captain Carter is going to be the right mix for this new version of Marvel Superheroes in Phase Four.

We hope that Hayley Atwell’s appearance in Doctor Strange in the Multiverse of Madness will not just be a cameo role. It will be really painful to experience this transformation of an animated character to Hayley Atwell if it ends that quickly. We can get a better picture of what Doctor Strange in the Multiverse of Madness has in for Captain Carter once the teaser or trailer releases.

Being the sequel of the 2016 release Doctor Strange, Doctor Strange in the Multiverse of Madness is expected to be released on March 25, 2022.