The Flash universe has taken a turn for the worse, and it turns out that the two beloved Flashes of out times are the ones whose feuding is behind the carnage. The battle between Barry Allen and Wally West had been intensely personal, as Allen tried to persuade West not to fall for the same mistakes that he made as a young man. However, Hunter Zolomon’s plan of playing on West’s emotions worked as the Speed Force was ripped open in the latest issue of Flash Wars, setting free the sort of ancient energies that the DC Universe has not seen in a long time. It turns out that the Speed Force is one of the fundamental forces of the universe and Zolomon wanted the two Flashes to help set it free so he could have all the pieces of the puzzle in the open. Now that Zoom is ultra powerful, it remains to be seen if the two combative Flashes can join forces to bring back order into the universe. Mark Waid and Mark Wieringo introduced the Speed Force in 1994 as part of The Flash#91. Wally West was out stopping a robbery at the Key Stone Central Bridge when the turn of events forced him to use the formula that Johnny Quick had come up with – 3X2(9YZ)4A. The formula made Flash go so fast that everything appeared to freeze around him. 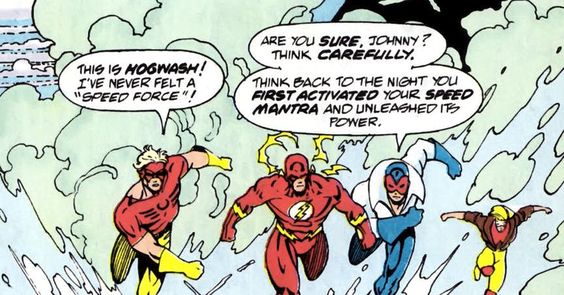 It took some sagely advice from the more spiritual Max Mercury for The Flash to master his new found power, and understand the Speed Force better. The competing ways of the scientifically minded Johnny Quick and zen master Max Mercury have been the mainstays of our understanding(and also Flash’s understanding) of the Speed Force. The Speed Force has been shown to be a separate dimension in the fabric of the DC multiverse. The Multiversity Map tells us that the Orrey of Worlds contains around 52 universes that make up the DC multiverse. They are encircled by the wall of the Speed Force and beyond lies of the Sphere of Gods that includes the Fourth World, Heaven, Hell and Dreaming. There have been instances before that Flashes have crossed through the wall of the Speed Force and merged themselves with it. This is what happened to Barry Allen in Crisis on Infinite Earths and to Bart Allen during the Flashpoint event. The Speed Force has been an important part of Flash’s story for quite some time and has been the origins to The Flash. It was made into a person on the CW show with whom Wally West could talk to and ask for advice. In the DC universe, it is as essential as the Emotional Color Spectrum also called The Green that binds together all life on the universe. The addition of the Speed Force to the DC universe will change things and the way they work in a drastic way, or at least that is what is expected. 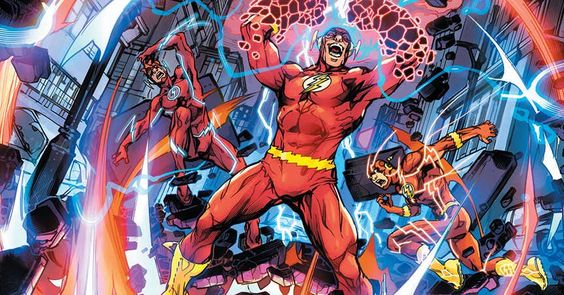 In the DC Universe Rebirth#1, Wally West was saved from the Speed Force by the Speed Force. If the villainous Hunter Zolomon is to be believed, that is where the other missing speedsters are, including Wally West’s children Irey and Jai. While we do not know if this is true for sure, Hunter was able to convince Wally of this fact, and to break open the Speed Force. It was Barry Allen who tried to stop West from doing so, citing his earlier encounters with the Speed Force when he has tried to break it open trying to save his mother from Eobard Thawne. While it is hard for Wally, blinded by love for his children, to see, all Barry attempts to do is try and show the way for West to be a better and more deserving Flash.

However, West was not going to listen and even half a chance to find his kids makes him go faster than he has ever been, breaking open the Speed Force. We do not know about the kids yet, but this, as it turns out, was what Hunter wanted all along. Taking over the red and gold costume that Barry wore during the Silver age, he is able to harness hidden forces of the Speed Force from across multiverses and become ultra strong. Apart from Speed Force, he is able to access Sage Force and Strength Force, granting him limitless psychic powers and super strength.

Fans are curious because Justice League and Flash are both playing with forces that bind the universe together. Scott Snyder’s Justice League is in the process of telling us about the seven forces of the universe, which includes the Still Force whose effect we are seeing in the Flash Wars in the forms of disturbances to Barry’s speed. It is a question then if the two plotlines will merge together at some point.