After The Mandalorian, actress Gina Carano is here to take her revenge. Looking at her work in the previous projects, the actress has been signed to star as a traumatized woman who’ll be tracking an infamous serial killer in an upcoming revenge thriller by Eric Red. 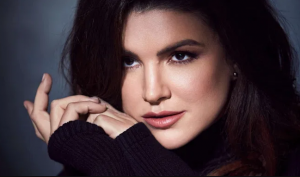 Eric Red, the writer of famous projects like Near Dark and The Hitcher is all set to begin an untitled action-thriller. The film’s story will be based on an intriguing novel, written by Eric Red, White Knuckle. The plot of the novel followed a strong and willful woman who tracks down a serial killer, “White Knuckle.” After being afraid of her encounter, she partners with a trucker to murder the killer’s terror in the region.

Amongst the vein of True Grit, Duel, and Breakdown, Carano will be producing this film along with acting in it. The shoot will start in October and it will take place in Montana, Tennessee, and Utah.

The film will be also produced by Amanda Presmyk (Dragged Across Concrete) and Dallas Sonnier (Bone Tomahawk) of Bonfire Legend. Along with them, it will be co-produced by Tony Timpone, the former Fangoria editor. With that said the international sales of the film will be handled by The Hurt Locker featured Voltage Pictures.

The upcoming revenge thriller by Eric Red is the same project that the former MMA star, Carano was talking about in a conversation with The Daily Wire. However, the team is still under negotiation with a director but it is expected that the film will get its release by 2022’s first quarter. The casting is being taken care of by David Guglielmo (The Pale Door).

It is highly in rumors that the makers will release the film exclusively in the United States for its members while also making the movie available to the entire world.

Carano, in a recent interview, said that “I’m completely ignited to be creating this thriller with The Daily Wire and Bonfire Legend. I feel I am exactly where I want and need to be at this moment in my life; it feels as if I have wings.”

The upcoming revenge thriller by Eric Red will be Carano’s first-ever come back after we saw her in a hit Disney series, The Mandalorian that was released early this year. The Fast 6 and Deadpool actress is soon going to be teamed up with Ben Shapiro’s The Daily Wire as well.

In the 1986 release, Hitcher starred Rutger Hauer, Jennifer Jason Leigh, and C. Thomas Howell. The plot followed a person who escaped from the clutches of a murderer but got stalked by the hitcher and ended up getting framed for his crimes. The same writer crafted and directed 100 Feet (2008) with Bobby Cannavale and Famke Janssen.

Gina Carano is managed by Eric Galen and Scott Karp.