In Injustice 2 issue #70, when Orca and Killer Croc are preparing to get married, we see Ivy recounting a story about Las Vegas (Elvis impersonator) following a marriage with Harley Quinn. Thanks to Injustice comics, we already have an idea that Harley and Ivy are a couple but comic storytellers Tom Taylor and Bruno Redondo have recently confirmed that the two actually went on to tie the knot here.

The marriage, however, takes place in a parallel universe though the two characters’ romance also exists in the mainstream DC universe. The two have always been a popular pair since Batman: The animated series. The two had entered in an open relationship in 2015. 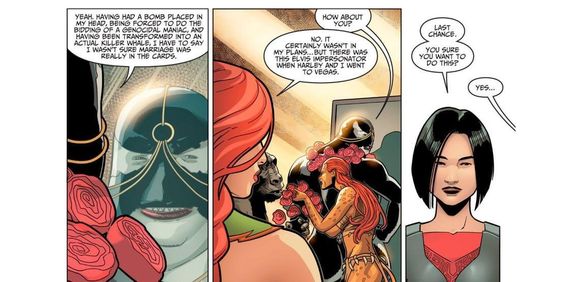 Also Read: Supergirl To Make An Entry Into The DCEU?

However, the video game Injustice 2 doesn’t have a happy ending for the two as it features both the characters conflicting against one another and their romance comes to a sour end. But hopefully, we will get to see the two pairing up for Harley Quinn’s own animated series for DC’s online streaming platform. The recently released synopsis for the series has confirmed that the two will play a more prominent role in the series. Here’s the official synopsis of the upcoming animated series:

“Harley Quinn follows Harley’s adventures after she breaks up with the Joker and strikes out on her own in this new adult animated comedy. With the help of Poison Ivy and a ragtag crew of DC castoffs, Harley tries to earn a seat at the biggest table in villainy: the Legion of the Doom.”

For now, we don’t know when the series will debut on DC’s online streaming platform though it’s speculated to debut sometime in 2019 alongside Young Justice.