Harry Potter is more than just “ well – known” series ; it is an emotion and for some of us “childhood” and “Harry Potter” are synonyms. Be it movie or books, we have lot of memories, joy and maybe even tears attached to it ! With such love given to the franchise, it is but obvious that fans have their favorite characters and one of the most adored  and  famous one is Ron Weasley.
Ron definitely has good sense of humor and his timing for delivering some funny remarks on even serious situations.
Here are some Ron Weasley memes that will remind you how loyal and genuine person he is ! 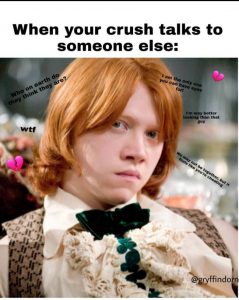 Ron was dreading at the Yule Ball. He had to wear his family’s hand – me – down robes at such an important event, but seeing Hermione with Viktor Krum together and masking his jealously and annoyance was really funny. He just sat there in denial and even fought with Hermione for going with Viktor Krum (whom he used to idolize previously). He was just not ready to accept his feelings for Hermione. 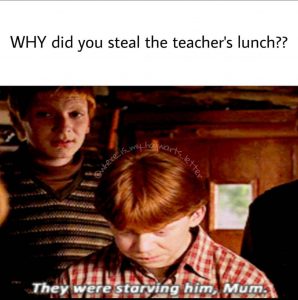 Ron is one hell of a friend. When his best mate (Harry) was locked in by the Dursleys, he did not think even once and chalked out a plan to steal his father’s flying car and flew right outside his window to help him escape the captives of his uncle and aunt. The plan was successful but he had to face the wrath of his mother. His explanation was the most hilarious part about it and he said,  “they were starving him”. 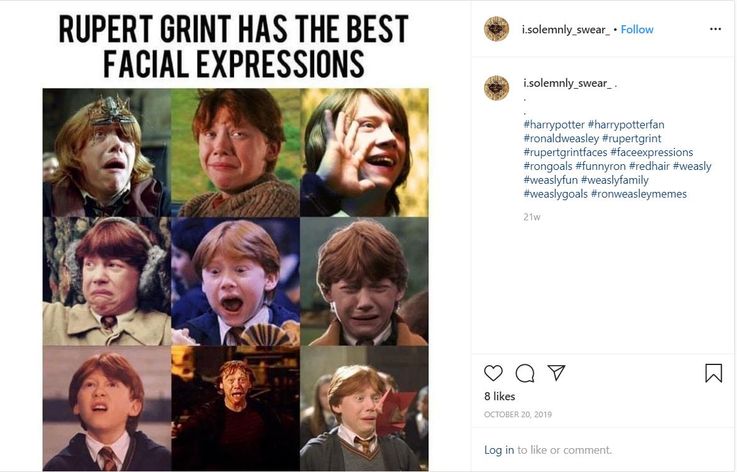 Throughout the series, Ron has had some iconic scared expressions. Though he is also bit over dramatic about the situations sometimes but his confused + panic expressions have been hilarious. Be it spiders, professors, his mom or even the flying car incident, his expressions have always been spot on. This meme perfectly depicts the same perfectly. 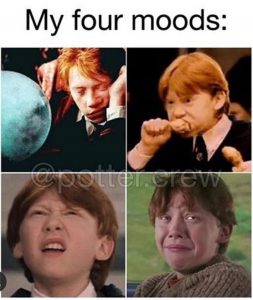 Ron is either sleeping in class , eating A LOT  so much that he even faced some dangerous situations due to his chocolate and mead intake, he is always confused all the time and our personal favorite ; he is panicking ! He is all of us. 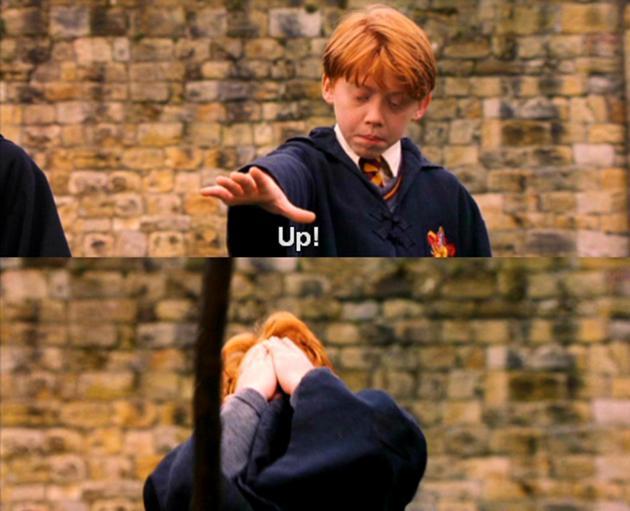 This is the iconic scene from the Harry Potter and the Philosopher’s Stone. It is from the hilarious flying class lessons given to the first years. The students had to take the right hand , keep above the broom and say “up”. But for some reason, Ron somehow manages to hit himself with the broom. Now it could be his lack of skill or  confidence or maybe there was something wrong with the broom; but it is hilarious ! 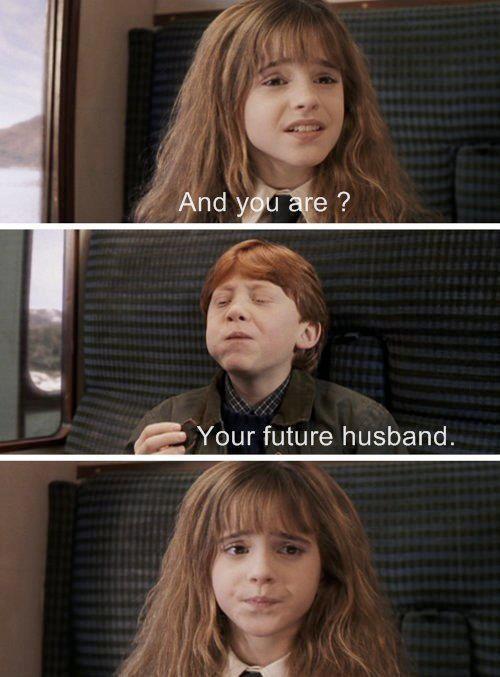 Ron and Hermione are the most loved couple from the Harry Potter. They started off as friends but did not really hit off well. Especially the very first meet when Ron was stuffing his face with the goodies. The meme points the situation re imagined after the last film. 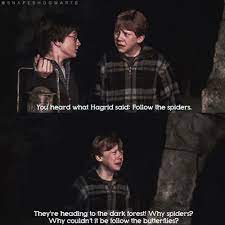 When Hagrid asked the duo to follow the spiders in the second part of the series, Ron due to his phobia of spiders was petrified by the idea and asked “why couldn’t it be butterflies”. This cracked us all up!

In the first year, Ron’s comments towards Hermione had deeply hurt her and she sat crying for hours. Of course that was the moment when the friendship among them sparked as Harry and Ron saved her from the troll. But in the latter parts, Ron’s opinion changed in such a loving way: he called her a wonderful person. This meme makes our heart melt.

2. His Hate Towards Crookshanks 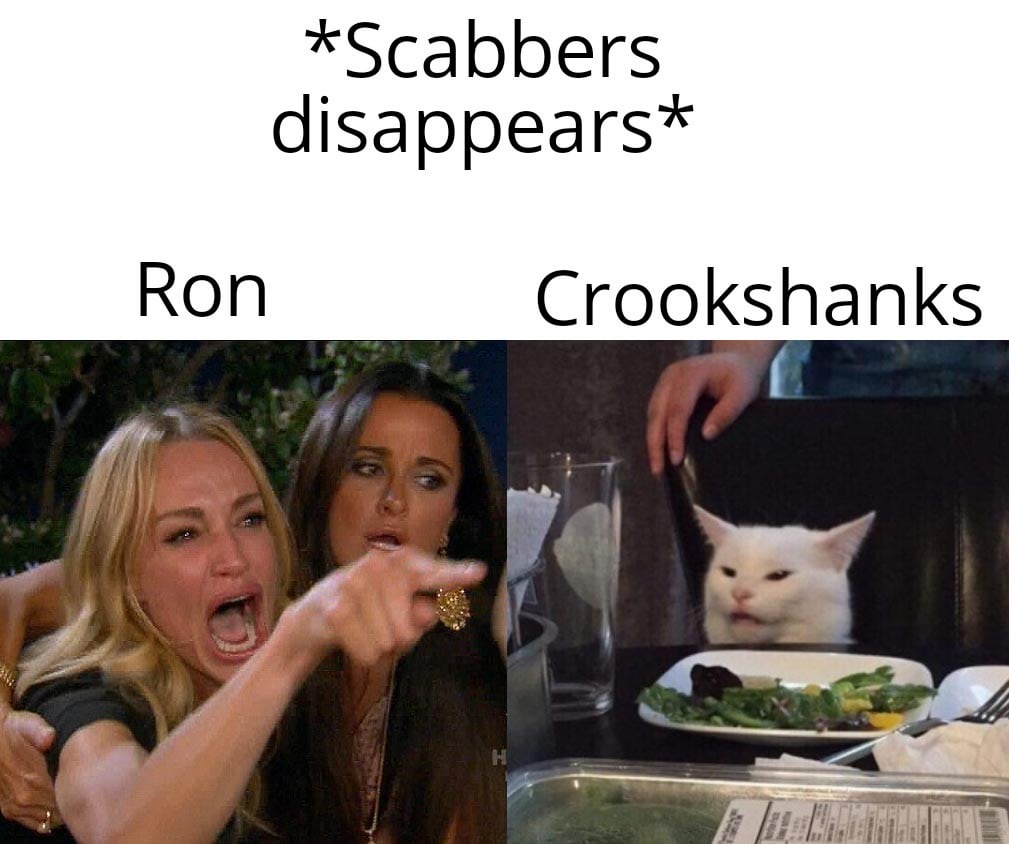 Crookshanks aka Hermione’s cat was always blamed by Ron when his rat Scabbers went missing. This blame was of course over dramatic but Ron never wanted to believe any other reason. He wouldn’t apologize when Scabbers was found, making these moments really funny! 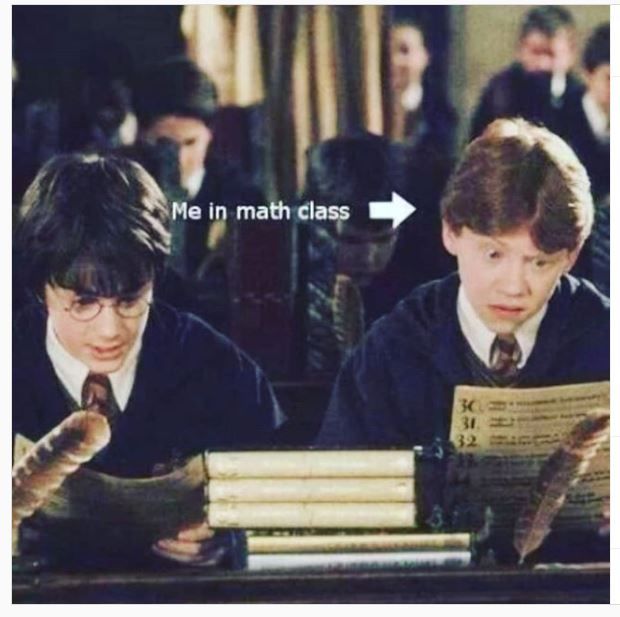 Confusion is one of the classic Ron Weasley traits. It is what makes his character funnier.
He is not a bright student and he relies a lot on Hermione for her help when it comes to his academics. We have seen him confused during many written exams at Hogwarts, so this meme is extremely accurate reaction to the same. Do not worry Ron, we have all been there!