Almost all of us grew up watching Harry Potter. We have lived through their entire journey and felt a part of it. The friendship between Ron , Hermione and Harry aka the Golden Trio has been one of the best friendships among the fiction world (and maybe even real world). The way the actors Rupert Grint, Emma Watson and Danielle Radcliffe have portrayed the characters; it has made us feel that it was also the most realistic friendships.
However, Ron was the very first friend of Harry. Harry did not exactly have neither a childhood nor any friends. It was the Weasley family that help him go to the platform  9 ¾  . Ron came and sat with Harry on the Hogwarts Express train and that is when their journey towards a loving friendship began.
Harry and Ron have faced all kind of conflicting situations but have always found a way to resolve them.
Here are 10 instances which convinced us that they were soul mates!

In their second year, Harry and Ron miss their Hogwarts Express because Dobby sealed the entrance to the Platform 9 ¾. Ron takes a bold step here to make sure the duo reach school on time. He steals Arthur Weasley’s flying car in order to make it to Hogwarts. Harry trusts Ron enough to support his decision and go with it and even trust Ron with his life as he drives the car.
Of course they make it to the school and end up crashing into the scary Whomping Willow and together face punishment as well! 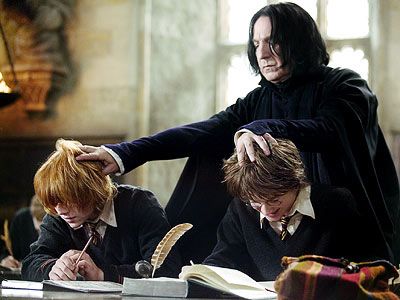 Snape has always had a grudge against Harry since the beginning and the latter never got good vibes from him either. Ron as a good friend always stood  up against Snape for Harry. When Harry came across the book of half prince and was able to use the same for his benefits , Ron kept the same a secret and even the knowledge of Sectumsempra.
Due to Ron’s counter mouth attacks against Snape , he always ends up losing House points but he does not mind it as long as he can support Harry in any form.

In the last part of the series , Ron and Hermione are on the way to destroy  horcrux . They need to reach the Chamber of Secrets from the girl’s bathroom. Harry and Ron had visited the same in their second year. But the only way to get into the chambers is by opening the door using Parseltongue. Now only Harry knows the language of the snakes. However , Ron makes weird hissing noises from what he remembers Harry doings in the second year. The door does open and they of course end up destroying the horcrux. This weirdly suggests the fact that Ron  who can’t remember what he studies, does have clear memory of what Harry did 5 years ago. They are so close ! 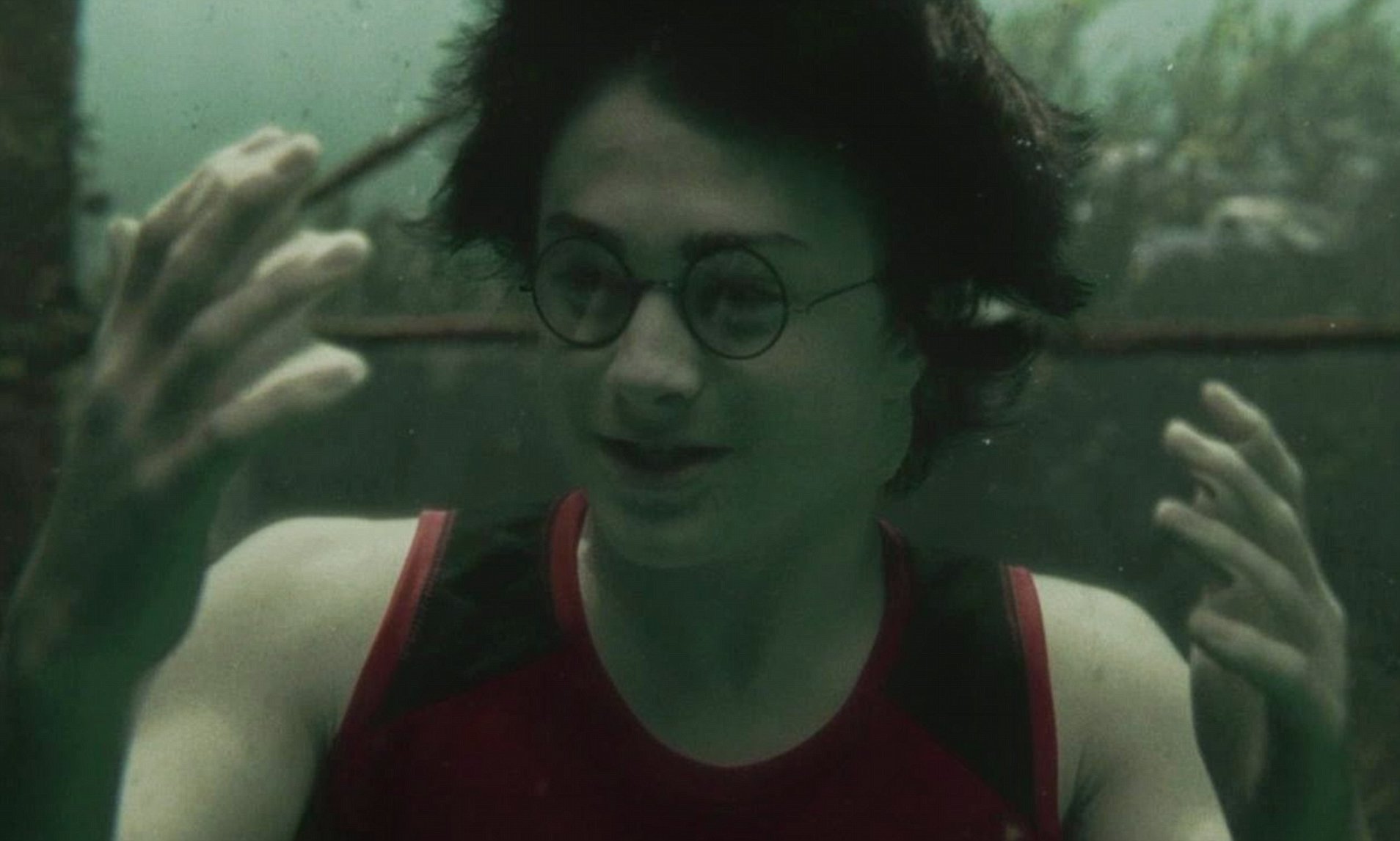 Harry Potter ends up participating in the Triwizard Tournament against his will. Dobby informed him that in the second task he has to rescue Ron from the depths of the Great Lake. This was not surprising to anyone and the judges choosing Ron for Harry just makes clear how special their relationship is.
Other two boys who were participating ; Cedric and Krum , had to rescue their romantic partners (at that point of time). Cedric had to rescue Cho and Krum had to save Hermione.
This just makes us thing that Ron’s bond with Harry was much more intimate.

In the latter part of the series, Harry and co ends up finding ways to destroy Salazr Slytherin’s Locket. Ron was wearing it to keep it safe. However the curses in embedded in the locket play with Ron’s mind turning him against his best friends. They try to assure him that there is nothing as he is thinking about them.
Ron as a result ends up leaving Harry and Hermione in the middle of the Forest of Dean for several weeks. However luckily for them , Dumbledore knew what could have happened and had prepared for it well in advance. After his death, he had entrusted his Deluminator to Ron in his will. The Deluminator helps Ron to find his way back to Harry and Hermione. On his return, he saves Harry’s life once again. He takes the Gryffindor’s sword and destroys the Locket thus saving Harry.

Ron always is there to cheer up Harry. He asked him to join the Weasley family for the Quidditch World Cup no matter what happens. Hermione at the end of The Prisoner of Azkaban, when Harry loses Sirius , she asks him to cheer up and not over think about it.
But Ron interjects and asks Harry to come and stay at the Burrow during the summer and that he would ask his Mom and Dad about the same and even call him on the fellytone to confirm it.
Ron being an adorable best friend he is , makes sure to distract Harry from a dull summer and that Harry has fun too and on the other hand all Hermione does is encourage Harry with words.

4. Ron Fought With An Injury!

When the Golden trio were not aware of Scabbers’ real identity , the Grim attacks Ron at the base of the Whomping Willow and  forcibly takes him into the Shrieking Shack.
Ron made a smart plan so to not be taken away by Sirius’ animagus form sadly backfires because the leg he had hooked around a root breaks.
Now we know how scared Ron usually gets, but despite being in such intense pain, Ron tells Sirius if he wants to kill Harry he will have to kill Ron too.
That is really brave of Ron.

When Ron by mistakenly eats the love potion spiked chocolates which were meant for Harry , the two visit Professor Slughorn to find some cure. After Prof gives him some cure, the effects of the potion start to wear down and  Ron decides to have a sip of mead  which Draco had poisoned in order to kill Dumbledore.
The Potions Professor is shocked when he sees foam coming out of Ron’s mouth and in turn freezes instead of doing something about it.
Harry thinks on his feet and acts quick by forcing Ron’s jaw open and forces bezoa r into his mouth. This helps Ron recover. Even Professor Slughorn appreciated Harry’s quick thinking and action in saving Ron’s life. One of the many instances where they saved each other’s life! 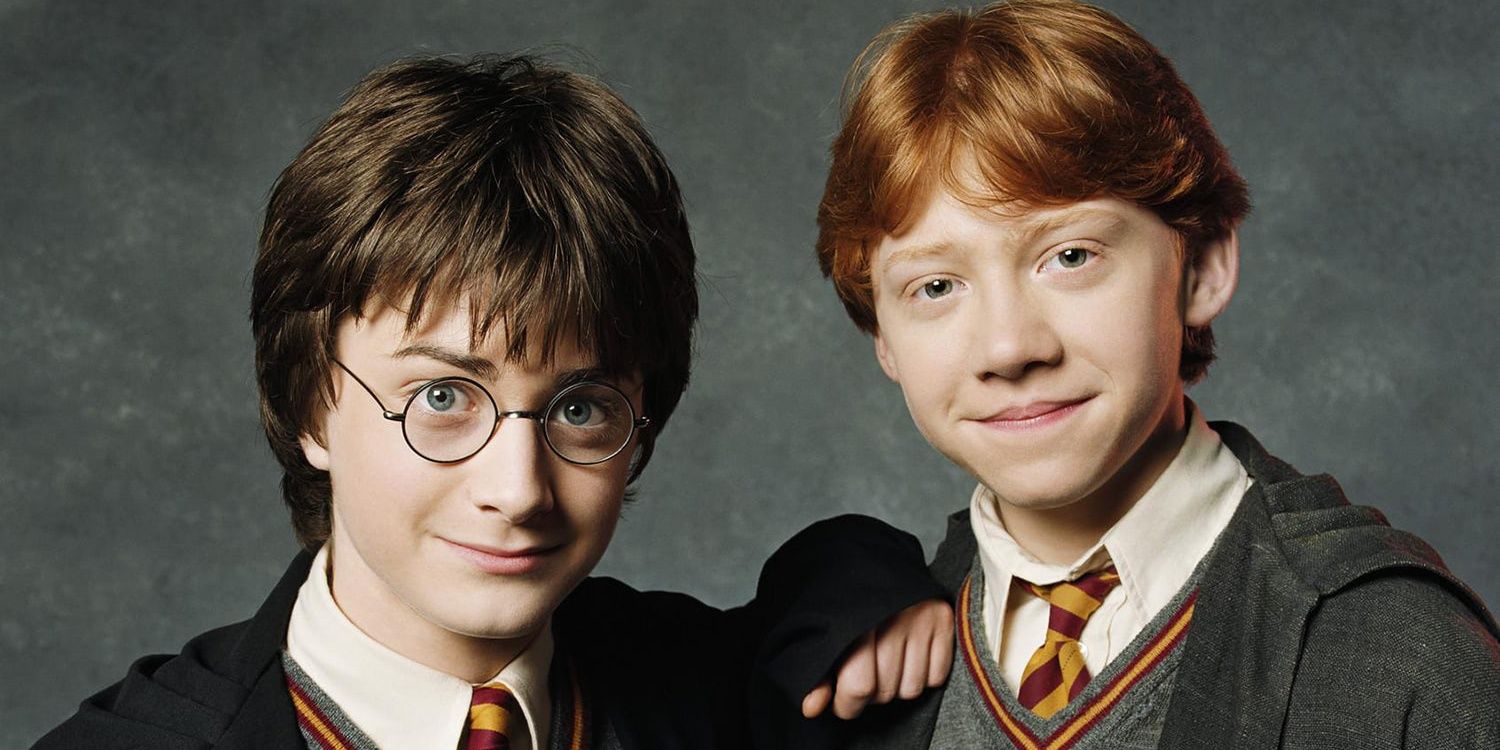 Like everyone knows, Harry and Ron hit it off instantly from the very first time they met. But Draco Malfoy with his two minions comes and tells Harry that Weasley is not a good family to be friends with and that someone like Harry should chose his friends wisely and not be friends with Ron.
Harry that very moment defends Ron saying , he can himself tell who is wrong from him and who is correct, and that he can make friends by himself and does not need any advice from Draco Malfoy.
This is a very important moment that defines and establishes the bond between Harry and Ron.

1. When Ron Sacrificed Himself For Harry !

In the very first part of the series aka The Philosopher’s Stone; Harry , Ron and  Hermione have to face different magical puzzles which are set by the finest and most experienced Hogwarts Professors.
In Philosopher’s Stone, we had seen (and even read) how much Ron was trying to ace at the Wizarding Chess. He had been defeated on numerous occasions but when they had to win a Wizarding Chess match, Ron said he was ready for it and played it for the team !
He get’s injured and asks Harry to leave him behind and carry on with the mission.
While declaring the points during the last day of the year, Dumbledore praised Ron  saying that this was the best Chess game played at Hogwarts in many years.
Ron had sacrificed his Knight (he was sitting on it) just so Harry could go on to the next stage.
Their friendship is heartwarming and if this is not love , we do not know what is !