The first official look of Marvel and Disney+ upcoming series, Hawkeye, has been revealed along with its premiere date. The glance reveals Kate Bishop and Clint Barton in the series. 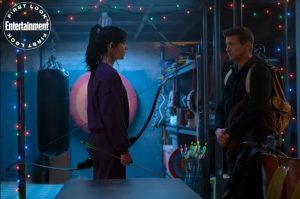 The first official image of Hawkeye includes Kate Bishop and Clint Barton in it, coming together in the upcoming Marvel and Disney+ series this year. Jeremy Renner is reprising his role of arrow slinging Avenger in the series. He made his Marvel Cinematic Universe debut in 2011 with Thor. He seemed to be working for SHIELD before joining and teaming up with The Avengers in 2012. The character has been a mainstay for the franchise in the last couple of years. But at the same time, MCU’s recent expansion with Disney+ has finally offered the fans to experience the character of Clint Barton in his own solo project.

In Hawkeye, Hailee Steinfeld will play the role of Kate Bishop. She will probably be Clint Barton’s rumored successor to the mantle. With that said, Fra Fee, Alaqua Cox, and Vera Farmiga are also settled to star in the Marvel and Disney+ series alongside Steinfeld and Renner. Not only that, but Black Widow’s Florence Pugh will also play the role of Yelena Belova in Hawkeye. She is expected to confront Clint about Natasha’s death. But how all this will come together, on-screen still remains unrevealed. However, the mystery gets a bit uncovered with the first official look of Hawkeye.

In the first look revealed by the makers of Marvel and Disney+ series Hawkeye, Renner and Steinfeld depict that Clint Barton and Kate Bishop are having their first meeting. The actor previously mentioned that Kate is a big fan of the bow superhero, and she herself is proficient in archery. In the image revealed by the makers, Kate is carrying a bow and wearing the purple color iconic suit that associates with her character. The article shows that Hawkeye will release on Disney+ this November 24. Renner posted the picture with a caption stating, “(Kate) a 22-year-old kid and she’s a big Hawkeye fan. She has a wonderfully annoying and equally charming manner about her, because she’s such a fangirl of Hawkeye. The relationship grows from that, but the biggest problem for Clint is Kate Bishop and the onslaught of problems that she brings into his life.” 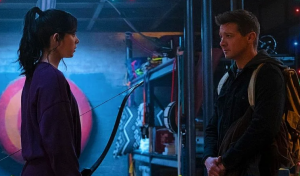 It is prominently hard to anticipate more about Kate and Clint’s first meeting. But the series will have a lot more to offer the MCU fans when it premieres. It is also highly expected that Hawkeye will also include a deaf Native American hero, Echo. He can intriguingly copy other people’s movements. How the fight will go like in Hawkeye is still a mystery, but at the same time, the series is sure to unite against the villains of the storyline.

Additionally, the article also revealed that Hawkeye will be the next MCU series, which means it will premiere before Ms. Marvel. This depicts that the last few months of 2021 will be packed with MCU surprises, including Spiderman: No Way Home and Eternals.

Hawkeye will premiere on November 24 on Disney+.