In the middle of 2019, some of the Marvel What If…?‘s voice casts were announced, while others were put on hold. While the new list of names includes some significant additions, it also consists of some omissions. We are already aware that Chris Evans and Robert Downey Jr. will not be lending their voice to the project for their respective characters. At the same time, Marvel Studios also confirmed that neither Tom Holland nor Scarlett Johansson will be voicing their part of characters in What If…?. However, what might excite the fan base are names like Don Cheadle and Benedict Cumberbatch. 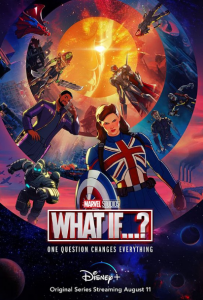 The Marvel Cinematic Universe fans will be excited knowing and experiencing Benedict’s voice featuring in an episode of What If…? where “Dark Doctor Strange” will appear. As per Illuminerdi, Doctor Strange in What If…? is the one who “found magic after the death of his true love which led him down a darker path with dark and dangerous magic in an attempt to change his past.” The voice cast for What If…? also includes Rachel McAdams (Dr. Christine Palmer), who could be Doctor Strange’s “true love.” The rest of the cast consists of:

The head writer, AC Bradley says, “I do joke that I’m writing very expensive fan fiction.” He also revealed a few hidden MCU cameos by saying, “According to Bradley, audiences will feel like they’re “watching one of the movies” within 30 seconds of watching the animated series streaming on Disney+.”

Marvel Cinematic Universe’s What If…? will be premiering on August 11 on Disney+.