Thanos’s power remains unrivaled. He is a mighty Titan and the most influential person in the universe. Thanos defeated heroes like Hulk, Thor, Vision, Loki, Spider-Man, Drax the Destroyer, Gamora, and Iron Man as if beating them was a piece of cake for him.

He bought the Asgardian race to near extinction. This made him one of the most dangerous villains of the Marvel Cinematic Universe. Even after having powers of infinity stone Captain America was able to hold him back in Avengers: Infinity War. 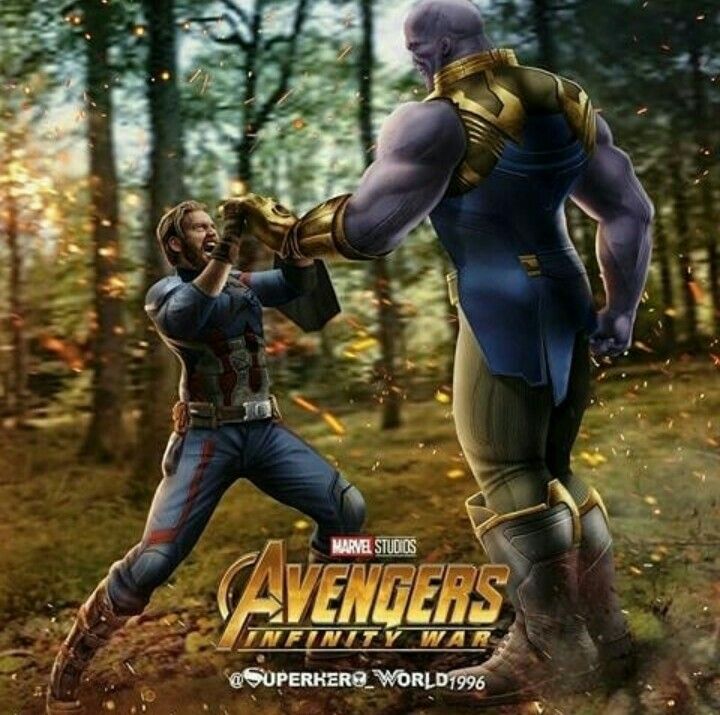 After making his entrance in the land of black panther, Wakanda, Thanos took the Mind Stone in jungles, completed the Infinity Gauntlet, and initiated the snap. Thanos displayed superhuman strength destroying Doctor Strange’s shield with a kick, snapping Loki’s head with a single hand. Avengers appeared to be pests to him, and he swatted them; yet, there was one who continued to fight, Captain America.

Captain America even hits Thanos square in the jaw, but it turns out to be pointless. Cap grabs the Infinity Gauntlet so that Thanos stays away from Wanda, but the mad titan knocks him down. It is but surprising to note that Cap was able to hold him even for 60 seconds.

The mad titan defeated Iron Man, the Hulk, and Doctor Strange in Infinity War. Wanda and Captain Marvel were able to get him on ropes; but, he escaped. “There lies strength in unity”, so when all the heroes teamed up, they were able to get hold of Thanos for some time. The incident proved that Thanos was not unbeatable. But, one thing which forces us to think is the fact that Cap was able to hold back Thanos.

CAPTAIN AMERICA AND HIS REAL STRENGTH

Although the first Avenger has super strength, it’s way less than that of Hulk and Thanos. He lacks magic or cosmic powers, unlike Strange, Wanda, or Captain Marvel.

Tony Stark’s suit provides him strength which makes him a step ahead of Cap. His strength, shield and will power were his only tools. “Willpower is the foundation of all human achievement”. Thus Willpower allowed the first Avenger to stop Mad Titan. Cap’s will surprises Thanos. In an interview, Christopher Markus quoted, “I think at that moment, Thanos is impressed by Steve’s will,”. “He’s like, ‘I can’t believe this guy who has no powers is trying this.’ He’s almost like, ‘Really? Really?'”.

Thanos admires those who are driven by strong beliefs and opinions. This is visible from his conversations in the Infinity War and Endgame. He exchanges words with Doctor strange saying that the hardest choices always requires the strongest wills. When Thanos fights with Tony stark, the titan pays Stark due respect even on being on the opposite end of the rope. Thanos also looks Cap the same way as he looked, Tony.

Y’all, #CaptainAmerica is the hero our world deserves. #InfinityWar pic.twitter.com/K3fMc9wD3K

Steve stuck on his never giving up attitude gave a tough fight to Thanos without giving up as others did. Some were unable to get up and fight back whereas some backed off when they realized that Thanos is way stronger than them. But, Steve fights until he failed. Our soldier didn’t lose hopes; this reminded us of  Steve Rogers of World War II, the one who was always ready to fight the wrong. No matter how much pain he has to take.

Thanos saw this man evolving over the years. He’s not only the Supersoldier serum. He is much more than that. Thanos believed that Steve was a man of convict like him. The first time Steve stood in front of Thanos, he thought how an insignificant being could gain the courage to stand in front of him. But second time Cap’s worthiness was beyond Thanos understanding. And this is the key to Thanos defeat in the endgame.