During an encounter with a lost Inhuman tribe, Thanos had conceived a child with one of the Inhumans and he had no idea that the boy; Thane, was nearing adulthood. Thanos then realized that the boy could actually pose a threat to him. Thane certainly did prove to be all of those things considering that his powers are almost godlike.

His story ended soon after his ascension but Thane is yet to appear in the MCU. And we don’t know if he is a hero or a villain.

Thane debuted in New Avengers #10 and he became aware of his lineage when Thanos began a war of conquest to find his missing child. Black Bolt had learned about Thane’s existence and status as an Inhuman and thus sent the Illuminati to find Thane before Thanos did, as he feared what could happen if they two got together or fought. Doctor Strange had found Thane but was controlled by Ebony Maw to forget he had located Thanos’ lost child. 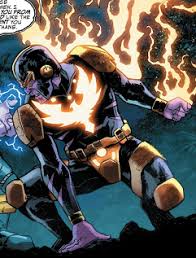 Black Bolt then battled Thanos and detonated a “terrigen bomb” that ended up spreading gas all over the planet. Anyone with inhuman DNA was subjected to the gas. Thane’s powers once transformed killed an entire town before Ebony May gave him a suit to control his powers. Thanos revealed his intentions to kill Thane which made him accept his powers and imprison Thanos.

Thane and Thanos’ battle ended up destroying the planet they were on and Thanos ended up depowering his son and leaving him trapped inside the god quarry. Even if Thane’s time was short, his powers were vast.

They were true to his lineage, he possessed a death touch in his left hand and the ability to trap people within an ambered state of living death with his right. His only weakness what that he had no control over his powers. Without the suit, he could actually hurt people or worse kill them.

But he is himself a victim of circumstance. If Thane does make an appearance in the MCU, it would be possible that he becomes a threat to everyone and everything and it could be intentional or accident as well.