Marvel has kick-started the year 2020 with a bang. It has recently come up with a new series known as ‘Outlawed’ #1. The new series is written by Eve L. Ewing and Simone Di Meo. There is a shocker for Marvel fans. The teen heroes that were part of the series are said to be outlawed. They seem to have abandoned due to a mistake that has been committed by them.

The new rule is confusing for everyone!

In Outlawed #1, a new rule has been passed out by the US government. The new law states that any teenager below the age of 21 can’t become a superhero. It will be illegal on the part of anyone to become a superhero at the age of below 21. Outlawed #1 lists the rules of the crossover. The reason behind passing this rule is all because of a life-threatening incident.

How one rule of the government has changed the entire situation!!

The incident was wherein the main heroes, including Ms. Marvel, Spider-Man, Nova, Viv Vision, and Moon Girl, tried to fight their ass off this dreaded dragon. The heroes in trying to ward off the dragon ended up making use of excessive energy and caused the entire chaos. The incident led to a lot of destruction, and because of this, the new rule was passed. Further, they observed that Kamala was missing.

Kamala and her fighting skills

As in the present day scenario, a new law by the name ‘Child Hero Reconnaissance and Disruption Law Enforcement’ in short CRADLE has been passed. Any teenager under the age limit of 21 is prohibited from acting as a superhero. They have passed the law to salute Kamala’s bravery since the character had suffered in the war.

However, with the new law passed, it will be interesting to see how many heroes are in favor vs how many are against it.

The video highlights how the recent law that has been passed by the US government has left superheroes in a state of anger!! 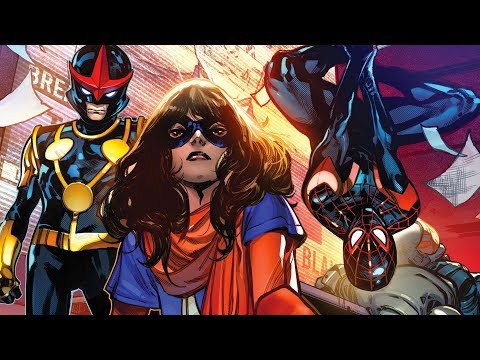