We all know this year has been anything but a fun ride. So, the 2020 Halloween celebrations were different as well. The more people get into pandemic-induced social distancing and lockdown, the more creative they become. Having time on their hands, they were able to show some crazy DIY skills. The celebrities are no exception. So this year, the A-listers put tremendous efforts into their Halloween costumes.  The fans noticed all the efforts they put on.

Maura Higgins is rocking Christina Aguilera’s raunchy look from 2002. Cardi B transforming into reptile-tailed Medusa, these are some of the best costumes. The incredible spooky looks of the year are as follows.

Halsey As Emily The Corpse Bride

Halsey, the American singer, songwriter, and activist, decided to go a little spooky this Halloween. She adopted the look of a corpse bride. With her big eyes and perfect makeup, she looked great. We can say she must have scared more than a dozen people with her looks. She is easily one of the scariest celebrities on the list.

American actress and activist Gabrielle and Dwyane (basketball player) have decided to look like S’mores. Gabrielle flaunted her flawless figure in a sexy brown slip dress  and the garment was a chocolate brown hue that looked simply stunning. Their daughter stole the show acting as the marshmallow with pillows attached to her.

The Rock as Mufasa The Rock taking inspiration from the lion king

Dwyane Johnson, an actor, producer, an athlete has decided to become Mufasa this year. With his  massive physique, all he could manage was a mask. He definitely pulled it off coupled with the mandatory trick or treat candy bucket.  This Halloween, he is the lion king who rules over the jungle.

The American singer, rapper, and songwriter picked up a look of Mike Pence’s fly.  Lizzo decided to pull out all the stops and rock a fly costume, made a video of her twerking on top of the VP’s head.  This year many people would love to catch this fly. 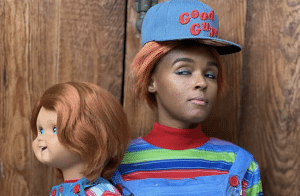 Singer, songwriter, actress, and record producer Janelle chose to become Chucky this Halloween. Chucky is a horror movie about dolls. And she is looking like a doll. Scary and beautiful Janelle made the 2020 Halloween celebrations memorable.

The celebs enjoyed Halloween with their fans, and this year connected digitally. Let us know about your favorite celebrity costume. What costume did you wear this year?