Who Loki is, we all know – thank you Marvel Cinematic Universe – but in terms of the contemporary comic version, it’s an issue of calling Loki a villain or a hero. Thor’s arch-nemesis’s MCU incarnation went through a transformation from Thor’s 2010 to Avengers: Infinity War, transforming him from an evil god to an anti-hero who was hesitant to do the right thing every now and then. Marvel Comics’ Loki has passed through a similar path, but much more. He was the original enemy of the Avengers in the sixties, but current Marvel Loki storylines set the trickiest god on the road to becoming an entire hero. He’s not always successful… but his best! He doesn’t always succeed! The most interesting things about Loki’s trip from villain to hero throughout the last decade of Marvel Comics, from the help in the defeats of villains such as Galactus, Surtur and Malekith to the wielding of Mjolnir. Thus, we at Animated Times thought why not tell fans how the comic version of Loki transformed from being evil to being good, and to show that, we have collected 10 of the best moments from the comics that portray Loki becoming good. Sounds legit? If so, let’s go through the list below and read about Loki’s transformation from a supervillain to a good guy in the comics.

10. He Was Reborn As ‘Kid Loki’ After Getting His Name Taken Out Of The Book Of Hel: 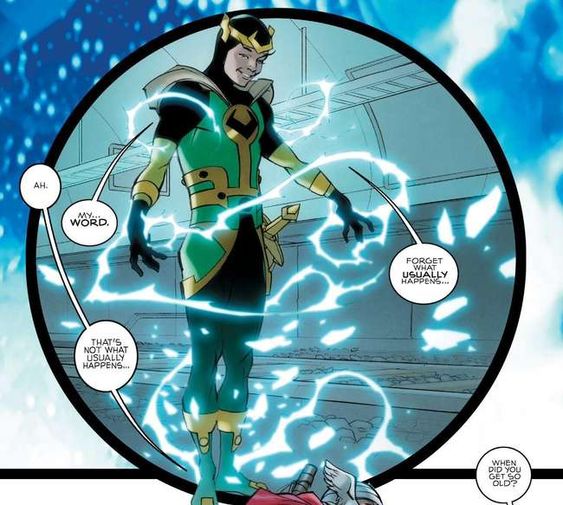 Loki sacrificed himself in 2010’s Siège #4 in the war against the Void in order to launch his redemption arc with a tremendous bang. Loki managed to whisper a few final words to Thor just before he met his death in the ominous guise of the Sentry: “I am sorry, brother.” Naturally, this is the ultimate deceiver, so it’s not gone for good that we are talking about here. Loki made a pact with Hela and Mephisto before the Siege began: Loki had his name washed from the book of Hel, and Hel said in exchange that it would result in the god no longer being “Hel-bound.” Hel-bound no more. As a result, he was reborn in France as a child named Serrure, who had no recollection of his previous life. Thor discovered him, restored his memories, and returned him to Asgard to start his life again.

9. He Helped Save Asgard From Galactus: 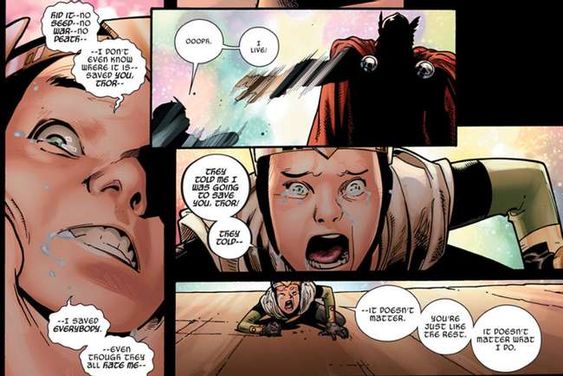 Even with a fresh existence in the form of an innocent kid, Loki struggled to shed the reputation he had accumulated through the centuries. Whatever he accomplished, the Asgardians did not believe he had the best interests of others in mind, and that his typical trickster tactics would surely resurface to burn them, as in the past. When Galactus came to the Nine Realms in a quest for the Worldheart, Loki played an important role by surreptitiously storing the cosmic seed while the Asgardians fought the Devourer of Worlds. Even though Loki used his cunning for good this time, Thor was enraged with him for acting without permission and began to throttle his younger brother. Loki burst into tears and exclaimed, “I rescued everyone. ” Despite the fact that they all despise me,

8. He Played A Key Role In Saving Midgard During ‘Fear Itself’: 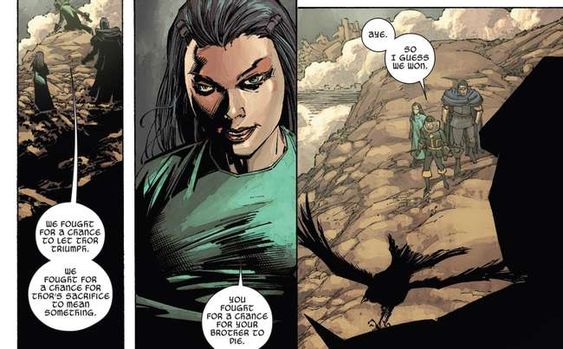 Cul Borson, Odin’s older brother, AKA the Serpent, began spreading terror over the Earth during the Fear Itself crossover event in order to feed himself, the God of Fear. Loki once again worked behind the scenes to assist his brother in defeating the Serpent. Loki rewrote the Serpent’s history using a pen forged from the Twilight Sword, causing the God of Fear to falter briefly when confronting Thor. This opening assisted the God of Thunder in defeating the Serpent, but Thor died in the process. Loki stated in Journey Into Mystery #629, with tears flowing down his cheeks, that he wasn’t worried about his next machination for once “Let us leave thinking about tomorrow to our newly acquired morning. If that’s all OK with you, I’ll think about my brother. ”

7. He Teamed Up With Daimon Hellstrom To Save Innocents From Nightmare: 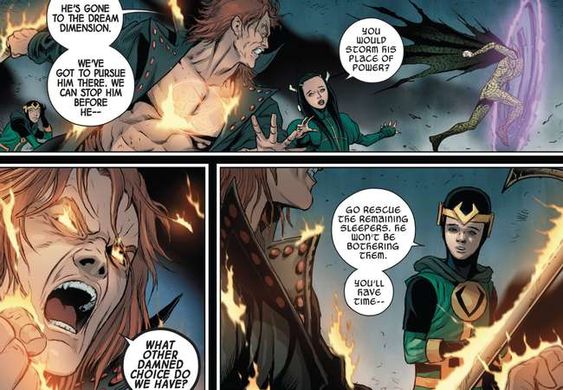 The evil Nightmare sprang out of Dread Itself and began killing people in their sleep in order to collect the fear created by the Serpent in order to construct a “crown of fear” that would make him as strong as a Fear Lord. This eventually led to Loki and Daimon Hellstrom collaborating to rescue innocent lives and prevent a monster like Nightmare from accumulating such deadly abilities. Loki, being Loki, felt that the best way to accomplish this was to instil dread in Nightmare, preventing him from killing any more innocent people. The second part of his plan was to notify the Fear Lords of Nightmare’s ambitions to become a Fear Lord himself, causing them all to battle for the throne forever. Hellstrom was dissatisfied with Loki’s plan, saying in Journey Into Mystery #636, “Oh, no. What if everything goes wrong for Loki? “I own your mind.”

6. He Was Instrumental In Helping Thor Take Out Surtur, Thereby Saving The Nine Realms: 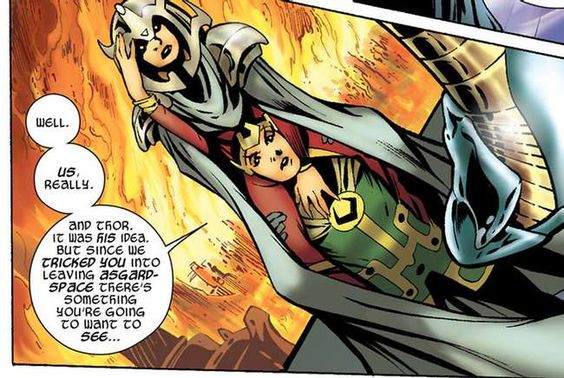 Because comic books are what they are, Thor was revived not long after meeting his creator in Fear Itself. And it’s a good thing, too, because everyone’s favourite fiery being, Surtur, decided it would be a good idea to burn everything in the Nine Realms. Loki eventually gave the Twilight Sword to Thor so that he might combine it with Mjolnir to deal a powerful blow. In addition, he and his closest friend, Leah, collaborated with Thor to deceive Odin into leaving exile in order to aid in the defeat of Surtur. Overall, Loki’s advice is quite useful.

5. The Spirit Of The Old Loki, Known As ‘Ikol,’ Eventually Took Over The Body Of The Resurrected Kid Loki: 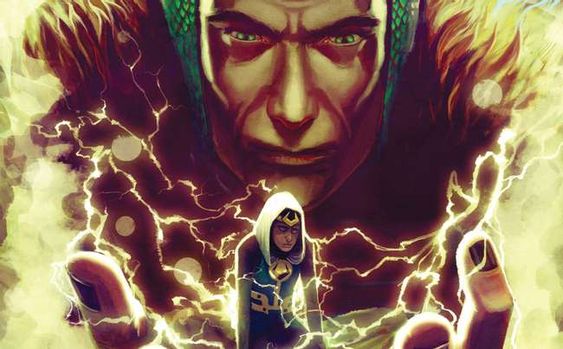 Let’s enter into the strange comic weeds now. In a subterranean room only Kid Loki could access, a “echo” of the old, mischievous Loki continued to live. After Mephisto took control of the Dread Crown Loki had dreamed about due to Loki’s own fear, the old Loki – known as “Ikol” – convinced Kid Loki that surrendering his mind and allowing the old Loki to replace him was the only way to render the crown worthless.Ikol’s aim all along appears to have been to let this reborn Kid Loki win the trust of the Asgardians in order to alter his image before regaining control. In Journey Into Mystery #645, Jesus says, “It is very difficult to change if the world does not let it happen. You restored my name with your purity. And now I have the opportunity to be someone else… by taking your place. ”

4. He Returned To His Evil Ways To Mess With The Young Avengers Before His Guilt Got The Better Of Him: 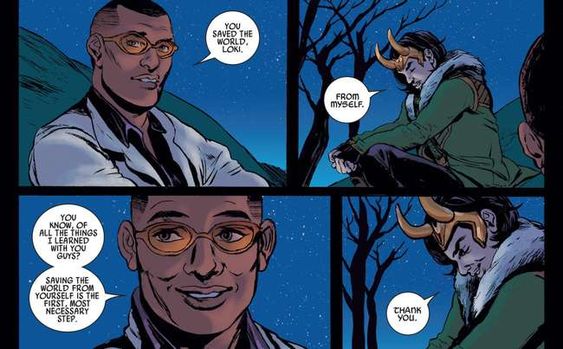 During the second volume of Young Avengers, Loki reverted to his evil, trickster ways by enlisting the interdimensional parasite Mother in a plot to take over Wiccan’s powers. His remorse finally prevented him from following through with his scheme completely, and he linked up with the Young Avengers throughout the series, but he wasn’t always truthful with the adolescent heroes… after all, he was Loki. By the conclusion, Wiccan had imbued Loki with magical abilities, and Loki had escaped from his new allies to deal with the overwhelming guilt of his previous acts. When Ikol took over, he thought he was totally eradicating Kid Loki, but some of the reborn personality’s growth remained.

3. He Became An ‘Agent Of Asgard’ To Wipe Out His Past Misdeeds: 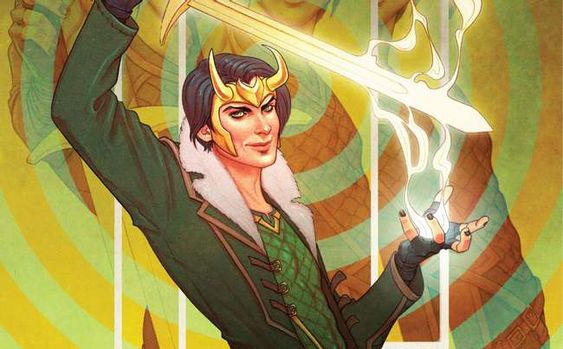 How does one go about erasing their previous sins? Of course, by going on covert missions for the All-Mothers of Asgardia in order to avenge previous wrongdoings! One good deed to undo the previous evil deed appears to be a fair method. In the Loki: Agent of Asgard series, Loki pierced Thor with a magical sword to expel an evil entity from his body, failed on purpose to bring Lorelei back to Asgard, and ended up quitting the All-Mothers’ employ because they were too devoted to the “chains of destiny” that Loki had been trying to avoid since his resurrection.

2. He Actually Got To Wield Mjolnir During The ‘AXIS’ Event: 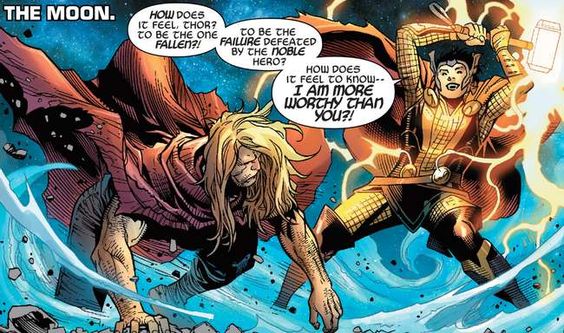 The bulk of the Marvel crew experienced an “inversion” during the 2014 crossover event Avengers & X-Men: AXIS. This indicates that the heroes turned into villains, and the villains turned into heroes. To be sure, it was a fascinating idea, but the ultimate result was less than stellar. Readers got to watch yet another Loki vs. Thor combat in Avengers & X-Men: AXIS, but with a delightful twist: Loki got to pound down on Thor with Mjolnir. Although it lasted just a few panels before the inversion was reversed, it was a cool sight to see Loki dressed up in Thor’s armour, tossing the lightning-encased Mjolnir around.

1. When Confronted By The Spirits Of Both The Original Loki And Kid Loki, He Decided To Forge His Own Path: 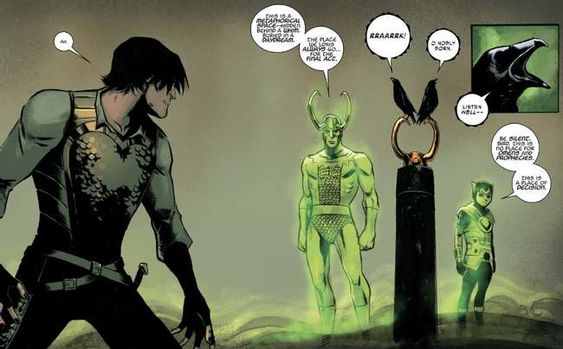 For a while, the new Loki battled to reconcile the past of his old evil self with the innate goodness of the young heroic self he pulled out to take his place. It all culminated in Loki: Agent Of Asgard #13 with a direct encounter with the two Loki souls. It was a mind-trip representation of Loki’s development through time as he was pushed in opposite ways. The old Loki desired that the new Loki “embrace nostalgia” and evolve into a real evil. Kid Loki, in a nihilistic turn, just wanted Loki to cease to exist and “rescue everything from yourself.” Loki chose a third route that rejects both forms of Loki in order to become something new: “[We] write our own happy endings.” Our own reinterpretations. We don’t have to be who we’re taught we should be. “Even if it’s just the two of us.”

So those are the ten reasons why the comic version of Loki was transformed from evil to good. Well, Loki being portrayed as an anti-hero in both the MCU and the MCU is a good thing for his fans, especially since he is played by a handsome hunk, Tom Hiddleston, in the Marvel Cinematic Universe. So what do you people want to say about this theory of Loki becoming good from evil? Let us know your valuable thoughts in the comments section below. Until then, keep reading Animated Times, the perfect place to get a closer look at the entertainment industry, upcoming movies, TV series, celebrity gossip, and much more. We’ll have you covered. So keep reading animated times, guys, for more.