Marvel and Disney Plus series Loki shocks the viewers when Kid Loki reveals that he killed Thor. Here is the theory breakdown of how he did it. 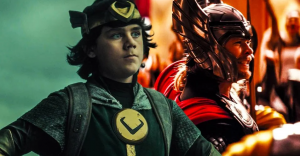 A shocking moment in Loki episode 5 revealed that Kid Loki killed the God of Thunder, Thor. In episode 5, Sylvie, the Lady Loki variant, discovers that the TVA (Time Variance Authority) does not kills the variants. Instead, it dumps them inside a mysterious void that is assumed to be the “end of time”. Believing that the one who controls and regulates TVA is behind the void, Sylvie unites with Loki, who was pruned by Ravonna Renslayer in episode 4.

Whoever steps out of TVA’s Sacred Timeline, the agents prune them to the void. Loki episode 5 introduced some more variants. These included Kid Loki, Classic Loki, Boastful Loki, Alligator Loki, and President Loki. God of Mischief tells Sylvie not to question anything after he introduces Alligator Loki to her. Even Mobius, a character played by Owen Wilson, states in Loki episode 5, “You throw a rock out here, you hit a Loki.” All these variants are found to be outwitting the cloud monster, Alioth, that gulps matter and energy.

When variants were disclosing their Nexus events, Kid Loki revealed that he was sent to the void after killing Thor. This story is assumed to be previously explained by Marvel that how young Loki killed his brother. A scene in Thor: Ragnarok shows how Kid Loki once turned into a snake and stabbed the God of Thunder, aka Thor, a superhero character played by Chris Hemsworth.  Since Kid Loki has an affinity for blades, the Nexus event described by him is possible. As a result, the Time Variance Authority agents must have arrested hum for Thor’s murder. 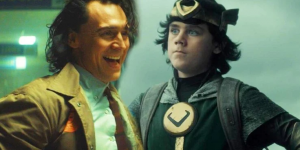 While the adult version of God of Mischief has attempted to kill Thor multiple times, this theory of Kid Loki killing his brother fits perfectly in the timeline. As Kid Loki was pruned long ago, he has spent enough time in the void and has established himself as the king. God of Thunder in Thor Ragnarok echoes that the snake incident that happened when Loki was eight years old. It seems like Kid Loki has stopped growing ever since he got pruned by the TVA and sent to the void.

The Nexus event seems natural. At the same time, there is a considerable probability that Thor would have died because of something else. In Fear Itself, an MCU comic, Kid Loki never used a sword to kill Thor. He was found to be planning so many things that the murder looked more indirect. The God of Thunder even improvised the snake story as one of Loki’s attempts to kill him. If Kid Loki’s Nexus event is real, it is clearly Thor’s fault, and there is nothing to blame the God of Mischief.