Hyperion has been called Marvel’s version of Superman since the character was established during the Silver Age of comics. 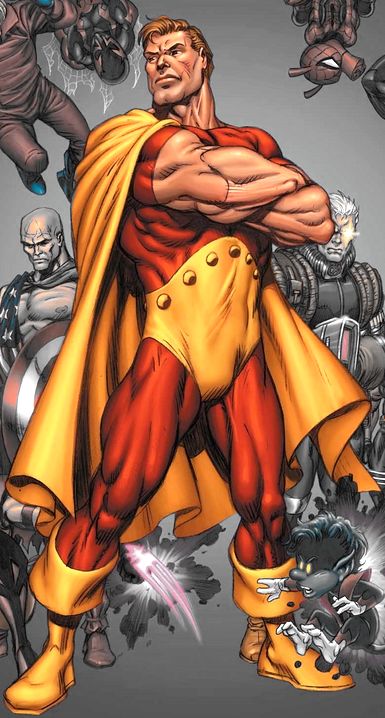 Both Marvel and DC have a long history of ripping off of each others’ characters. Be it between DC’s Green Arrow and Marvel’s Hawkeye or DC’s The Atom and Marvel’s Ant-Man.

It was in 1969, that Marvel first introduced the character of Hyperion in Avengers #69. An Eternal who was pretty much a super-powered version of DC’s Superman, but unlike the Man of Steel, he could be both good and evil. 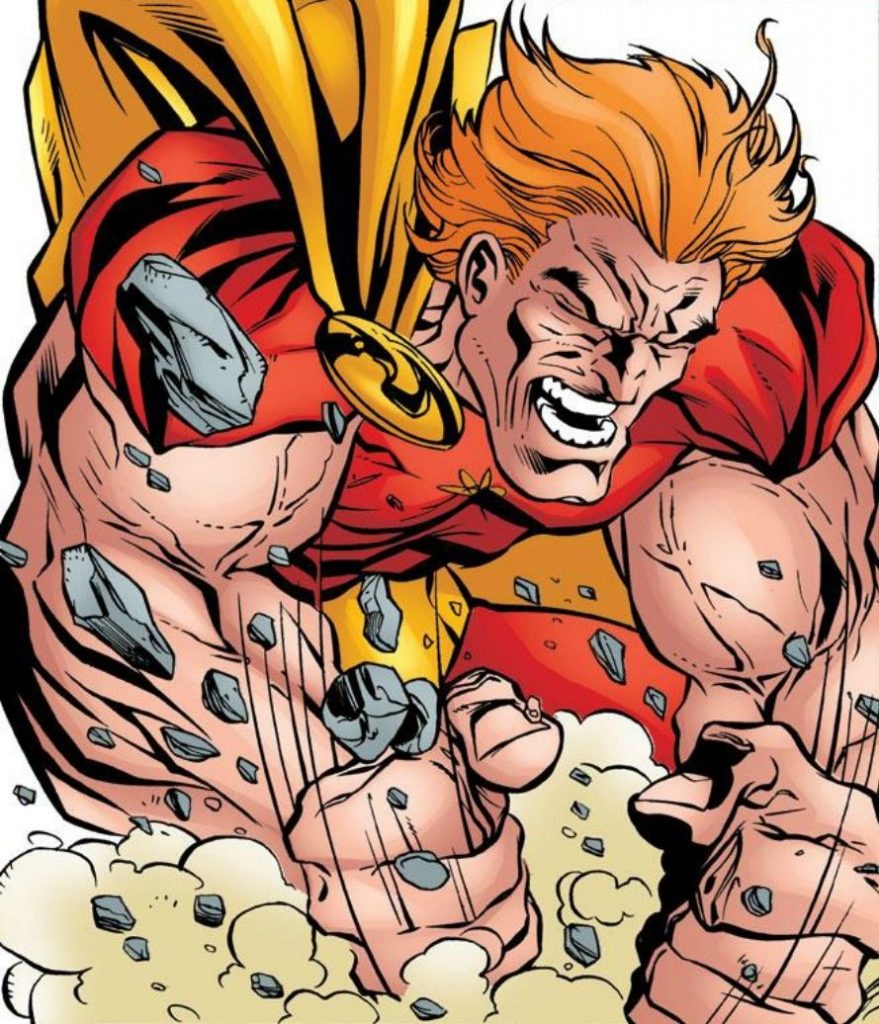 Various adaptations of this character have gone about as commander of both the Squadron Supreme and Squadron Sinister, following after everything from defending the public to administering over them as an unchallenged god.

Hyperion was presented by Roy Thomas and Sal Buscema in Avengers #69 as a member of the Squadron Sinister. He was an interplanetary voyager Zhib-ran, imbued with superpowers during the blast of his home world. Coincidence much? 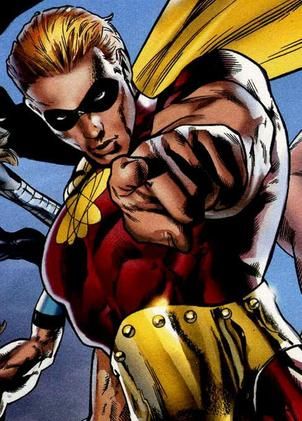 It is only later that we get to know that this was a scheme by the Grandmaster, who masterminded the evil Hyperion Zhib-ran, an artificial being created out of extra-dimensional energy, to defeat Kang the Conqueror.

Grandmaster twists Zhib-Ran’s memories, revealing to him that he’s a hero named Hyperion. Accordingly, Zhib-Ran believes he’s doing good as he battles against Thor. Unfortunately for the Grandmaster, Thor is quick to beat Zhib-Ran, making the Master of Games flee, abandoning his Squadron Sinister. 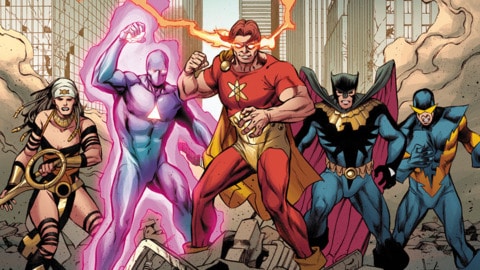 After the battle with Thor, Zhib-ran was imprisoned in a glass sphere floating in space, from where an alien named Nebulon rescued him. Working with the alien, Zhib-ran gets his own memories back, as the conditioning by the Grandmaster is broken, and he becomes good for a while.

As Hyperion, he even works with Doctor Strange and the Black Panther, but that was a short run, and he turns evil once more. This leads to the classic battle between the two Hyperions – good and evil, where Hyperion (the good guy) kills Zhib-ran (the bad guy).

Why is Hyperion so Powerful? 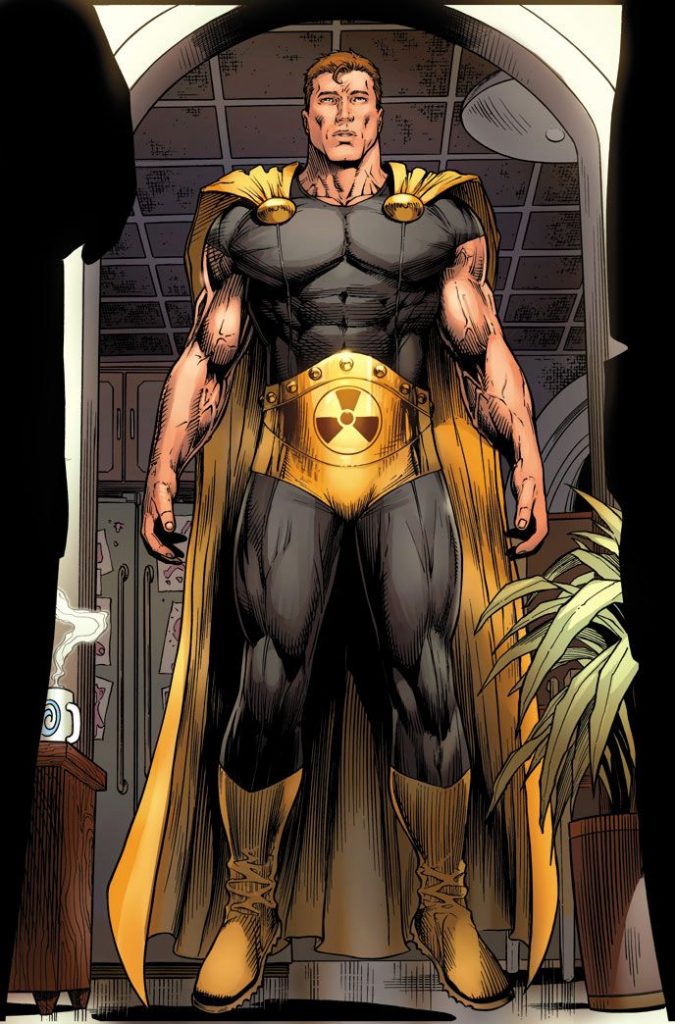 Most versions of Hyperion have the physiology of an Eternal. In certain forms, he is even alluded to as the last of the Eternals, who are an immortal group of superheroes, created when the Celestials messed with the genes of proto-humans on Earth.

As an Eternal, Hyperion absorbs cosmic radiation. This awards Hyperion an assortment of powers, which are very similar to that of Superman’s – super-strength, super-speed, invulnerability, flight, regenerative healing, and “atomic vision” – like Superman’s heat vision. He additionally has super senses—permitting him to see somebody’s DNA from space, and even super-intelligence – permitting him to out-think supercomputers. As Superman can completely live off of yellow sunlight, Hyperion can get by on cosmic radiation, without having food, air, or rest. 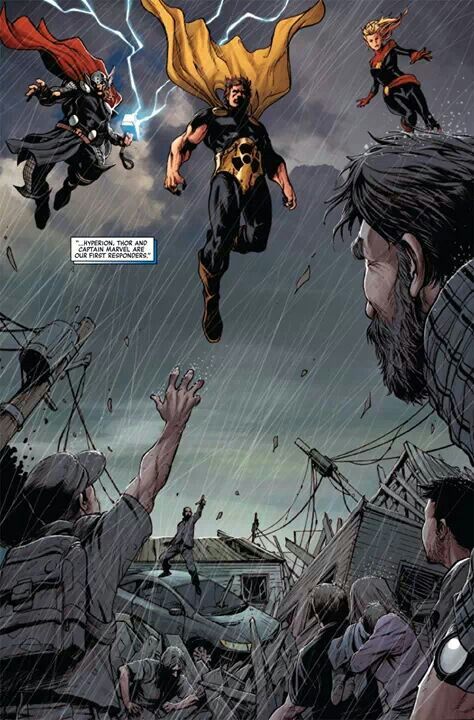 In 2013, we meet Hyperion once more, this time created by none other than SHIELDs Phil Coulson. From Jonathan Hickmans Avengers #1, we are introduced to an Eternal who goes by the name of Marcus Milton.

Milton  is the only survivor from Earth-13034 reality, which shattered when it crashed with another dimension. He was maneuvered into Earth-616 by A.I.M and then goes on to become an essential part of the multiverse Avengers.

Which basically led to Marvel’s Superman becoming a part of the Avengers – Earth’s Mightiest Heroes. Unfortunately, he dies fighting the sinister Beyonders. 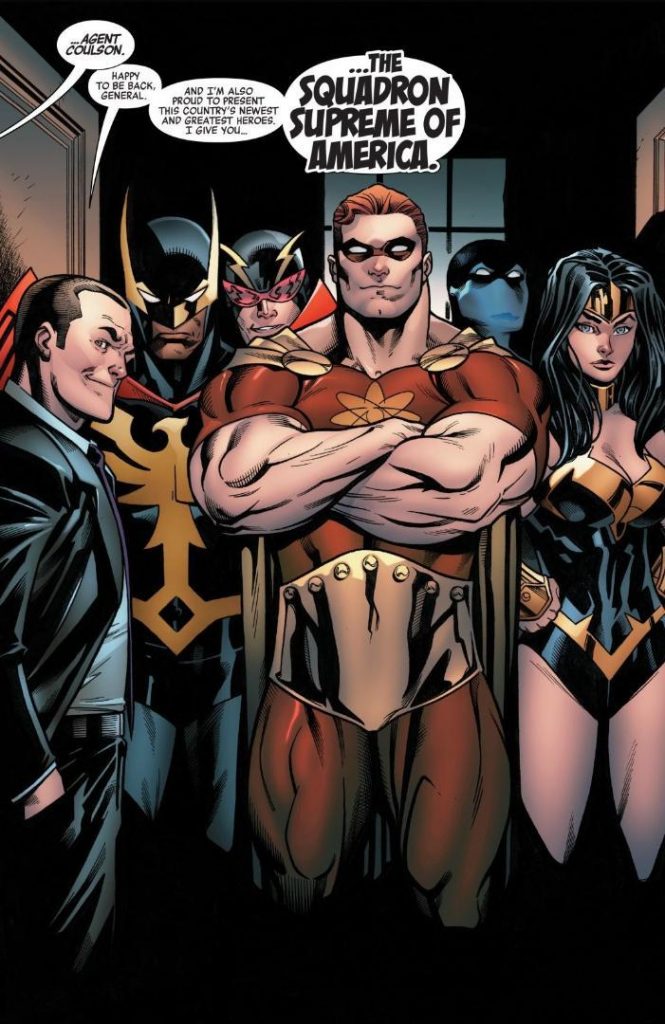 It is also quite likely, that this Hyperion provided Coulson with the genetic materials to create his own evil Hyperion. In Avengers #10, the Squadron Supreme are reintroduced into the comics, this time created by Mephisto and the Power Elite. Their main purpose is to protect Coulson and the United States and those loyal to them. Coulson even calls them (Washington) DC’s finest heroes.

Basically, they are Marvel’s version of the Justice League.

And although for now Hyperion is a hero, and protecting the people (even if it’s just the United States). But given his creator, it is more than likely a possibility, that Hyperion will go rogue once again.