Jennifer Aniston is looking for romance in the new year. After two failed marriages, the star is ready to open her heart for a new relationship. She was married to Brad Pitt from 2000 to 2005. They split up after the actor cheated on her with Angelina Jolie. Later she tied the knot with Justin Theroux, and they split up in 2017. The 53-year-old is still friends with her ex-husbands.

Aniston played the famous character Rachel Green in the show Friends. She had on-screen chemistry with David Schwimmer, who played Ross Geller in the sitcom. The duo’s characters were dating on the show, and the people loved their on-screen chemistry. They were linked together in real life.

Read More: “We never crossed that boundary, We respected that”: Jennifer Aniston Had a Huge Crush on her Co-Star Whom She Almost Dated

The duo rose to fame after their show Friends hit the US. People loved their on-screen chemistry, and they always rooted for something more. Ross and Rachel, played by Jennifer Aniston and David Schwimmer, were the core characters of the sitcom. Their characters had amazing chemistry, and people always speculated they were together off-screen.

During the Friends reunion on HBO Max in 2021, the duo opened up about their feelings for each other. Schwimmer confessed to having a major crush on Aniston.

“The first season I had a major crush on Jen, And I think we both, at some point, were crushing hard on each other. but it was like two ships passing because one of us was always in a relationship, and we never crossed that boundary.”

The Just Go with It star admitted to having feelings for the 56-year actor. She confessed,

“We were in relationships, it was always never the right time, and it wouldn’t have worked. The beauty of that was that whatever feelings we had we just literally channeled everything into Ross and Rachel. And I think that’s maybe why it resonated the way it did.”

Ross and Rachel instantly became the favorite characters of people. They loved their bond on-screen. After the star’s confession when they sat down with James Corden and the other cast members of the show, fans were left in awe. They were happy with the duo admitting they had special feelings for each other.

There has always been this rumor of the Murder Mystery actress and Intelligence actor dating in real life. Fans have always wished for Ross and Rachel to be together. The sitcom wrapped in 2004 but became a part of fans’ life. They love the show, and there are emotions linked with it. When Aniston and Schwimmer admitted to having feelings for each other during their Friends reunion, fans speculated they were secretly dating in real life.

The Marley & Me star cleared the rumors of her affair with her co-star and called it bizarre. During an interview, she said, “I could not believe that actually. Like, really? That’s my brother.”

An Instagram user going by the name of 80slolita has once more transported followers to the moments they have always wished they could relive. He shared a montage of the duo with quotes where they confessed their feelings. It has once again sparked an extremely fascinating discussion about their reunion and rekindled romance on social media. 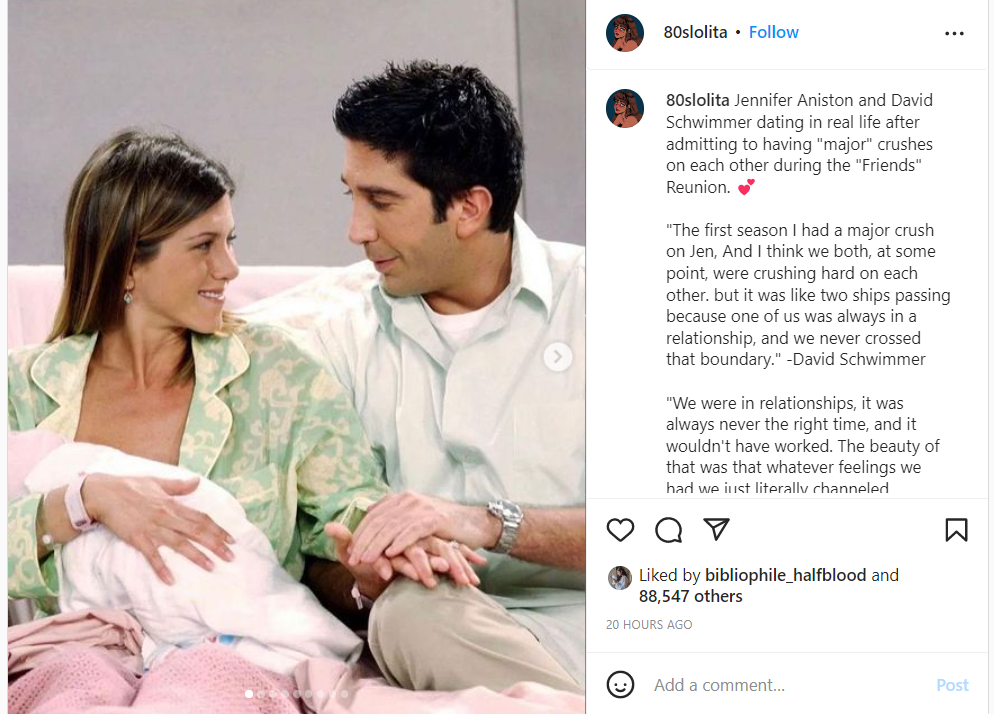