But their proposal was not as easy for them as one would expect. In a throwback to how the proposal went, George Clooney made the revelation, disclosing how it was about to go absolutely wrong, but how it all worked out in the end.

George Clooney on how he proposed his wife

It was April 2014. George and Amal Clooney were having a peaceful time at their home. It was just supposed to be a normal day for the couple. But The Sand and Sorrow star had other plans. He had decided that he was going to propose to Amal that day.

Reflecting on the day in The Drew Barrymore Show, he made some shocking revelations. He had it planned in his head to the minutest of details. Where he would hide the ring, which song would play when he would propose, everything. But things seldom turn out the way you expect them to.

Also Read: “I labored under the delusion that I looked OK without makeup”: Kelly Ripa Was Forced To Host Live Without Any Make Up Because Of George Clooney

George Clooney said, “I planned it out. I planned the whole thing out.” But it didn’t stop things from going haywire. In Clooney’s words, it was a “disaster”. The Ticket to Paradise star had hidden the ring in a lighter. According to the plan, just when Why Shouldn’t I by Rosemary Clooney started playing, he would ask her to go fetch it.

It was supposed to be something magical. But that was far from how it went down. The actor said,

“She sees the ring in the drawer and pulls it out. She says, ‘There’s a ring there,’ like somebody left a ring there years earlier, and I am on my knee, and now the song is playing, and we know exactly how long [the proposal] took because of the playlist.”

That is something that nobody would want.

Also Read: ‘If you’d have had s*x with me, I’d make you crazy’: Chrisley Knows Best Star Todd Chrisley Slams Mark Braddock for Claiming He Slept With Him, Says He’d be Less Disappointed if it Was George Clooney

It wasn’t smooth sailing. It took 20 minutes of the Ocean’s Eleven actor kneeling which finally made her say, “Yes.” He continued,

And that is how the two of them came together in holy matrimony. It’s a relief that their married life has gone off with fewer hitches than the proposal did. They now have two kids, Alexander and Ella. 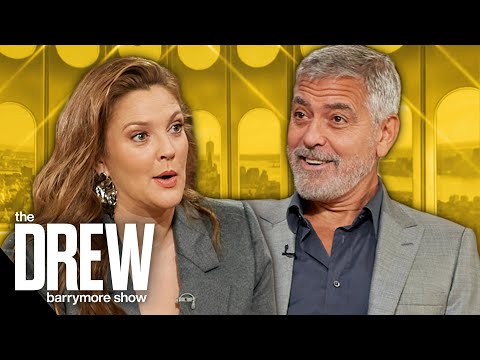 Also Read: “There is a girl coming to your house that you’re going to marry”: George Clooney Was Warned Before He Met His Wife Amal Clooney For the First Time

“If you ever make her uncomfortable, I’ll kill you”: Brad Pitt Threatened Harvey Weinstein After He Made Then Girlfriend Gwyneth Paltrow Uncomfortable

“I couldn’t remember if I had underwear on or not”: Salma Hayek Was Ready To Get Severe Head Trauma While Trying To Protect Her Modesty From Channing Tatum