During a TikTok video published on Nov. 21, Amber Heard’s BFF Julia Fox claimed that she was dating Kanye West so that he would leave his ex-wife alone. While Kanye West and Julia Fox’s brief fling will forever be etched in our memories, the No Sudden Move actress insists it was for the sake of her fellow women.

Also Read: “Maybe Ex-boyfriends weren’t wrong when they were calling me Lesbian”: Julia Fox Doesn’t Want to Date Men Anymore After Her Breakup With Kanye West

Julia Fox Takes One For The Team

According to a TikTok video posted on Monday, Uncut Gems actress Julia Fox, 32, revealed that she planned to write about her relationship with the rapper Kanye West, 45, in her upcoming book; also, she decided to share some insight for free.

In response to a comment criticizing her relationship with a “famously violent misogynist and antisemite,” the actress replied, “The man was being normal around me” during their meeting and conversation.

As Fox continued, she revealed that the Kardashians bought and sold her fashion line in their stores in the ’10s and that she had a special love for Kim Kardashian. The Uncut Gems actress told in the video that West had been texting her, and she had not responded as she was not interested and felt dating celebrities is “boring.”

“But then I had this thought, and I was like, ‘oh my God, maybe I can get him off Kim’s case. Like, maybe I can distract him and just get him to like me. And I knew if anyone can do it, it’s me because when I set my mind to something, I do it.”

Fox appeared to be referring to Ye’s recent anti-Semitic and anti-Kardashian online rants that got him suspended from both Instagram and Twitter.

It was between January and February of this year that the couple dated. Fox observed,

“He wasn’t on Twitter during their month together. He wasn’t on any form of social media. He didn’t even talk about his relationship.” 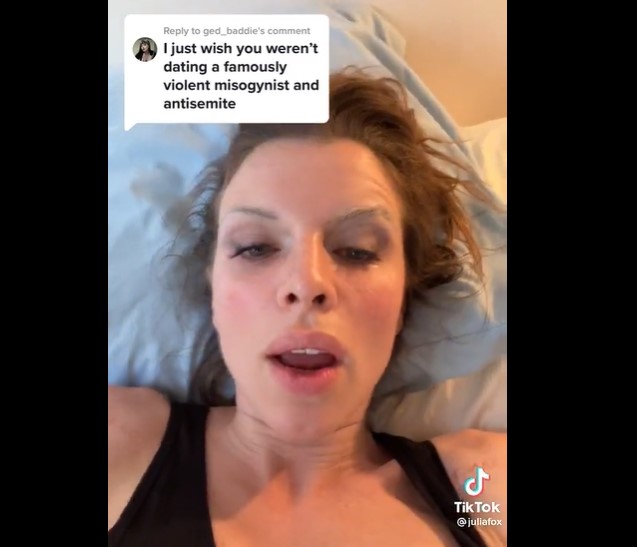 Also Read: Kanye West Marks Twitter Return With Another Jab at Anti-Semitism Remarks That Destroyed His Multi-Million Deal With Adidas

Instead, she said he mainly talked about “clothes, and weird ideas, and plans for the future, and our hopes and dreams for childhood, and education.”

She said, “It was wonderful, guys.”

The rapper-turned-designer wasn’t using social media then, but the minute he started tweeting again, “I was out,” Fox said.

“I realized pretty quickly that he wasn’t going to take my help… in saying that, I deeply respect the man as an artist; I don’t want to shit on that, reduce his whole career to his bad moments.”

She ended her TikTok video conversation, “In saying that, I stand with the Jewish community. Period!”

In the wake of Elon Musk’s controversial takeover of Twitter, Kanye West’s account has been reinstated by the social network after being banned from many platforms until this week.

It was announced in February 2021 that Kim Kardashian was divorcing Ye. Kardashian’s divorce from Ye is still pending, but a judge dissolved her marriage to Ye in March, allowing her to change her name back to “Kim Kardashian” from “Kim Kardashian West.” During that time, Julia Fox allegedly met Kanye West and started dating, which ended in approximately a month.

“Julia Fox says she briefly dated Kanye West so he would leave Kim Kardashian alone: ‘And I was like, ‘Oh my God. Maybe I can get him off Kim’s case. Maybe I can distract him… just get him to like me.’ I knew if anyone could do it, it’s me.’”

“And I was like, ‘Oh my God. Maybe I can get him off Kim’s case. Maybe I can distract him… just get him to like me.’ I knew if anyone could do it, it’s me,” pic.twitter.com/jn5NOBoVfk

In response to this tweet, fans started reacting to her explanation in the video she posted on her Tik Tok account. Here’s what fans are saying about it all:

Funny how Ye hasn't mentioned her name once yet she can't stop talking about him constantly for attention lol. He dumped her and she tried to deny it and pretend it was mutual lol he sent her on your way with a birkin and said thank you for your service

This stance is still severely problematic. She knew exactly who he was beforehand. Chose to be with him for the clout. And then dipped when it started falling back on her. He has been anti-black misogynistic in anti-Semitic for years prior to this publicly.

Here’s the video but I don’t like all of this JF slander 🫤 pic.twitter.com/xYemR2Sw69

The pick me girl jumped out

Through their comments now, people are judging her and saying that she is only doing this to gain attention, and Ye hasn’t commented yet on Julia Fox’s explanation.