Despite of the massive hype Infinity War trailers made, most of the plot of the movie is still not known to us, although we do know that the main intention of the movie is to show a massive fight between The Avengers and Thanos, a story that has been building up for more than a decade now, but there are a hell of a lot awesome moment that have a great chance of showing up in the movie, which would definitely be a treat for fans!

The Avengers Infinity War is presumably based on 1991’s Infinity Gauntlet ad 2013’s Infinity, not everything will happen exactly the same but the good news is that we’ve dugged up and ranked those super awesome moments and ranked them for you, so here are 5 scenes from the comics that will take place in Infinity War and 5 that won’t.

10. WILL: THANOS TURNS NEBULA INTO A ZOMBIE

Nebula, the once loyal child of the Mad Titan switches sides with guardians of the Galaxy and becomes a new member of team the and takes a vow to kill Thanos, so it is pretty obvious to assume that Thanos must be pretty pissed off by this fact and would punish her for her disloyalty, being the cruel character he is.

In the infinity Gauntlets comics, the story depicts that Thanos uses the Gauntlet to Turn Nebula into a charred zombie like creature and damages her mind beyond repair, even Adam Warlock, the keeper of the Soul Stone said that what remained of nebula is beyond redemption and better of dead! Dad of the year I guess?

9. WILL: THANOS ERASES HALF OF THE LIFE IN THE UNIVERSE WITH THE SNAP OF HIS FINGERS

We all know that Thanos is Hell bent on destroying the universe but, in the comics there is this one particular scene where he destroys half of the universe with the snap of his finger to please Mistress Death, the actual personification of DEATH in the marvel comics, now we are certain that this scene might very well make it into the movie but the context is still unknown.

Since he destroys half of the universe some of the heroes vanish from the face of earth too, which could explain the absence of Halkeye and Ant-Man from the trailers, the good news is that both the heroes are returning for Avengers 4!

8. WILL: THANOS KILLS THE WAR MACHINE! 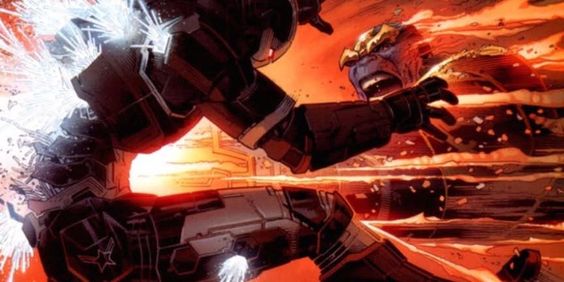 There are a lot of anticipation and speculation a lot of casualties in the movie, since the who exactly is going to die isn’t revealed yet RDJ and Chris Evans are on the top of the list, but there is no saying who might join them.

One of the most likely candidate to die though could be James Rhodes, The War Machine. In the story Civil War II Thanos killed him by punching through his War Machine Armor! This left Tony Stark in a deeply disturbed state of mind.

7. WILL: NEBULA STEALS THE INFINITY GAUNTLET FROM THANOS 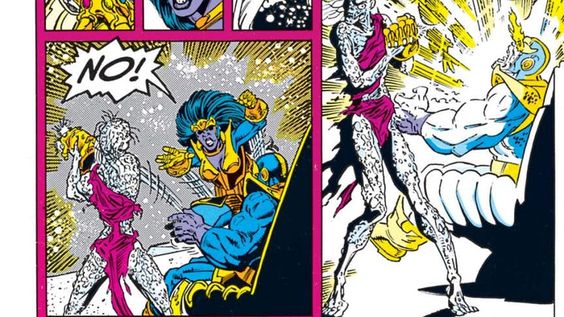 Nebula has always been a questionable character, she has proven herself really unpredictable in the MCU movies, therefore there is no telling about her motive, although she seems to be trying to redeem herself with the guardians but there is no telling what she might do in the future.

In the Infinity Gauntlet comics Thanos ultimately spares the universe and shifts into his astral form, Nebula seeks this opportunity to pull the gauntlet off Thanos’s hand and restore her disfigured body and banished thanos into deep space, and then goes on to use the gauntlet for her own purpose, which were as bad as her father’s (if not worse).

6. WILL: INFINITY WATCH IS FORMED 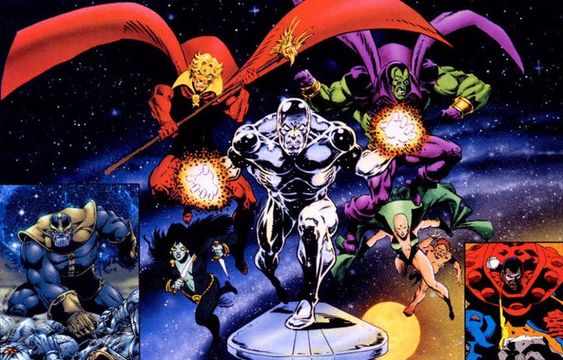 We all know that the bad guy always loses in a Superhero story, so this ain’t gonna be different. In the comics when Thanos was defeated one of the cosmic entities The Living Tribunal(Who’s staff has been mentioned in Dr. Strange) decides that the stone should be separated, Adam Warlock was chosen for the task.

The stones ultimately ended up in the hands of Adam Warlock himself, Pip the Troll, Gamora, Drax, Moondragon and Thanos too! With the exception of Thanos, rest of the keepers of the stones stayed together and formed the Infinity Watch!

5. WILL: THANOS FREEZES THE FREAKIN UNIVERSE 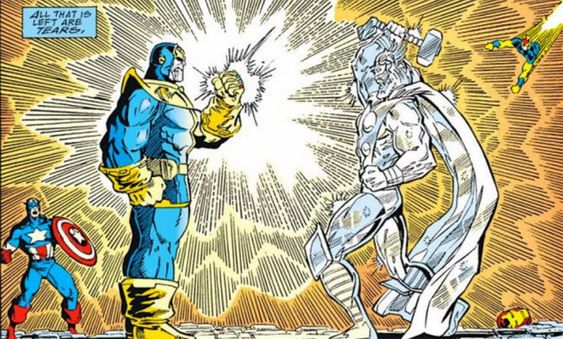 Infinity Gauntlet in the most powerful weapon in the MCU as of this moment, with all the Infinity Gems in place Thanos can alter every aspect of reality without even lifting a finger.

While it will be an absolute pleasure watch the power of the fully assembled Gauntlet there’s this one scene from the comics that will be an excellent addition to the movie where Thanos freezes time and heroes like Thor, who was trying to stop him without even breaking a sweat! Now that would be badass!

Although this will not be a PG film in anyway but watching Thanos dissect any one let alone his mother would be a little too much for Disney to show, however there is a chance of a brief origin story of some sort which might shed more light on Thano’s character.

In the comics Thanos Rising, a young Thanos goes on a killing spree, his actions led him into dissecting many people of his own planet including his very own mother!

Though the Disney and Fox Deal was sealed and X men and Fantastic Four are finally a part of the MCU, it is highly unlikely that we will see any character from these franchises anytime soon.

Therefore the chances of Thanos killing cyclops brutally by cutting off his concussive force beam and cutting off the oxygen for him to breath, are close to none. 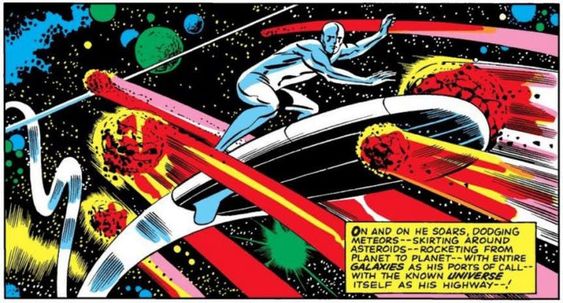 In the comics Silver Surfer was one of the first cosmic being that got the wind of what Thanos was doing, he confronts the Mad Titan but gets trapped in the Soul stone in the act, shortly after that he and Adam Warlock warn the avengers and join them in their quest to stop Thanos from destroying the universe!

Although there were quite a few rumors of him being in the Infinity War because of the recent Fox and Disney deal but they have all been denied, although there is a strong possibility of him showing up in the future MCU movies but just not this one in particular. 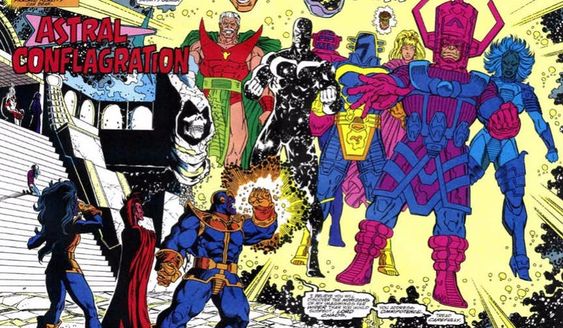 Let’s be realistic, with a complete Infinity Gauntlet Avengers stand a very little chance of winning against Thanos, though there might be a slight chance that the all powerful cosmic entities like The Eternity and The Living Tribunal might show up as they both have duties to safeguard the Infinity Stones, although this would completely render the Avengers useless and ruin a whole decade of build up.

In the comics, Galactus and Eon were the first to show up to stop Thanos in his quest followed by Master Order, Lord Chaos, Eternity, the Living Tribunal, Kronos although their combined might was still not good enough and they were not able to stop the Mad Titan on their own.