A hero is defined by the villains he fights. Maybe that is why the Batman is so well-respected and adored by fans worldwide. Iron Man is a very famous superhero with a Rogues Gallery that contains villains that are far less impressive than you would have thought. Here are some of the lamest Iron Man Villains out there. 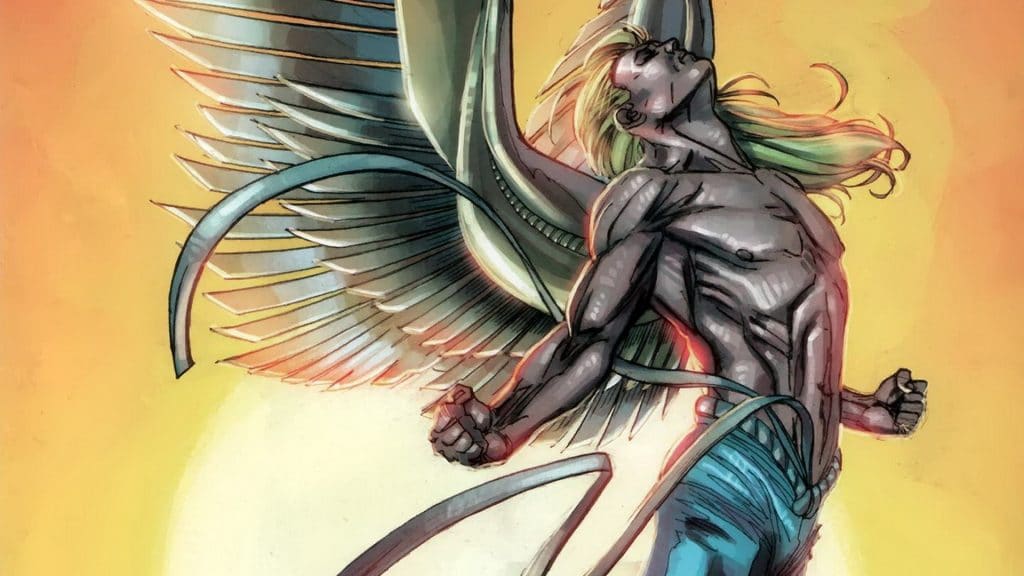 Where do we begin with this one? Angel is probably the least deadly villain of the X-Men. He has literally one power – to fly. And he does that very slowly too. Granted he has other abilities but they are basically good at support functions. Angel should never take the lead and dive face first into the enemy. But he does in Tales of Suspense #49. It is not just the fact that Warren Worthington III beat Iron Man it is the way in which he turned evil that makes us laugh. Apparently Angel flew too close to a nuclear explosion and instead of being vaporized, he turned evil (because a hero is always immune to 3 thousand degrees and immense radiation no matter how weak he is). Angel punches Iron Man with his bare fists and defeats him. He later flies to the X-Mansion and declares he is leaving the X-Men for the Brotherhood of Evil Mutants because “that’s where the action is”. 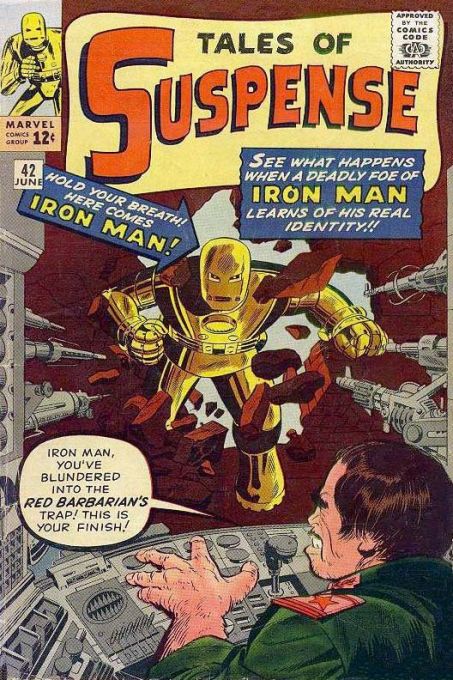 While we do not encourage stereotypes in Fandomwire, this one is just way too hilarious to ignore. The Red Barbarian is a villain that debuted in some of the earliest issues of Iron Man – Tales of Suspense #42. The Red Barbarian has no super powers. What he does possess is the power of Communism. He is a powerful USSR General. He drinks Russian Vodka, drives Russian Tanks, has a thick Russian Accent, and of course, he loves Mother Russia. And that is enough to give Iron Man a run for his money as it seems. The Red Barbarian’s name should have been the Red Colonel or the Red General because that would have made more sense. Thank goodness we did not see him again in latter issues. 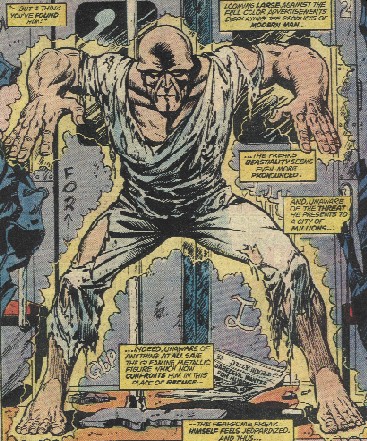 Marvel Comics really knows how to diss on its own lore and mythos. The Freak is one of the greatest examples of that practice. The Freak has no powers apart from the fact that he is a well-built man who engages in regular intensive exercise. He did show some mild superhuman strength in later arcs. Oh and he is also Happy Hogan, Iron Man’s best friend. Naming him The Freak was just really bad writing. Why not just call him Dumbass or Moron while you were at it? Iron Man regularly refers to Happy as The Freak throughout their fight. Mind you that is Iron Man talking to his best friend. How could you do this Mister Stark? 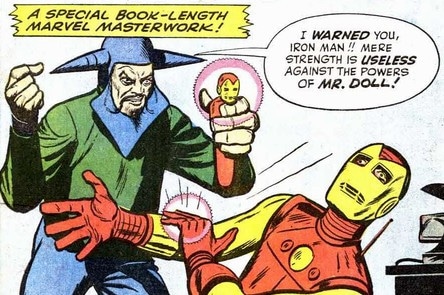 What is even more hilarious is that the original name for Mister Doll was actually Mister Pain. The Comics Code Authority thought that the original name was too graphic for children so they forced Marvel to change it. If that does not make any sense, wait till you hear this. Mister Doll is actually a rip-off of a Fantastic Four Villain. The Puppet Master is a very famous villain from the Fantastic Four Issues. Marvel just ripped off one of its own super villains because they were apparently out of ideas. You can pretty much guess what his powers were. He made effigies of his enemies and then played with them (No, you freaky idiot that’s not what we meant!)

You May Also Like: A New Iron Man in MCU?

Talk about a gargantuan mistake! Gargantus was one of the first enemies Iron Man fought after escaping captivity and finding his new calling as a superhero in the marvel Comic Book Universe. Gargantus is basically a gigantic cave man with a huge club. We mean we get the symbolism – Modern Man fights Primitive Man to find out who is stronger and better of the two. But the best Marvel could come up with was a huge caveman? And to add insult to injury, Marvel completely changed Gargantus’ origin story by revealing that he was actually an alien robot sent to invade Earth. An advanced alien robot with a superior A.I summarized that the best way to conquer the planet was by clobbering things with his club, one town at a time. 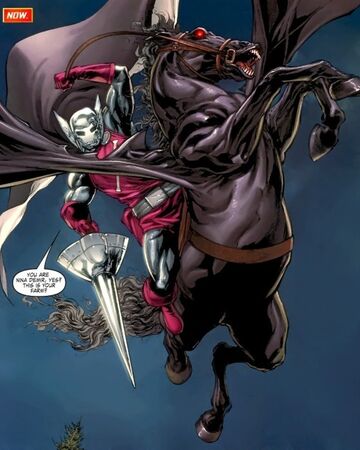 Okay he may not be a lame super villain but on this list, he makes the lamest choices. Dreadknight either has the supernatural ability to make the worst choice imaginable when picking his battles or the writers just hated him to the core. He is a fairly good super villain. After angering Doctor Doom, Dreadknight fights and humiliatingly loses against Iron Man and Frankenstein’s Monster. Dreadknight is considered a loser even in the Marvel Comic Book Universe. The Evil Sentient Super Computer Quasimodo considers Dreadknight pathetic choice when Norman Osborn is looking for potential recruits. When an equally forgettable bad guy considers you to be a loser, you need to rethink and retrace what you do next Dreadknight. 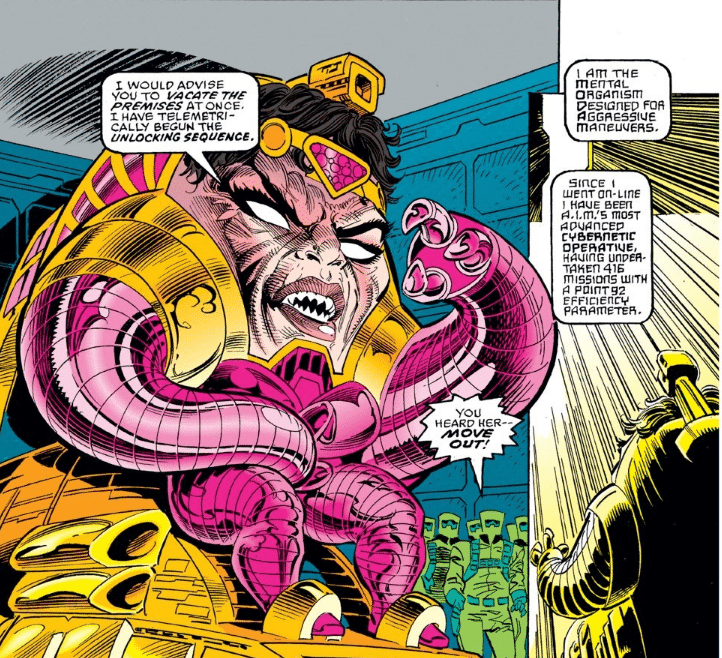 Everybody feels lonely. Even a giant floating head needs company. MODOK is a cool Iron Man super villain. Created by A.I.M, MODOK has all the necessary attributes to be worthy enough to even join the MCU. But he was once captured by his own creators at A.I.M and turned into a female version of him-self named MODAM. MODOK needed a mate so his creators turned him into one. MODAM almost managed to defeat Iron Man before she got on the wrong side of Omega Red. Iron Man and A.I.M struck a deal and MODAM was captured. The Red Skull now showcases MODAM’s body as a trophy in his Hydra Base. That is a sad way to go down. 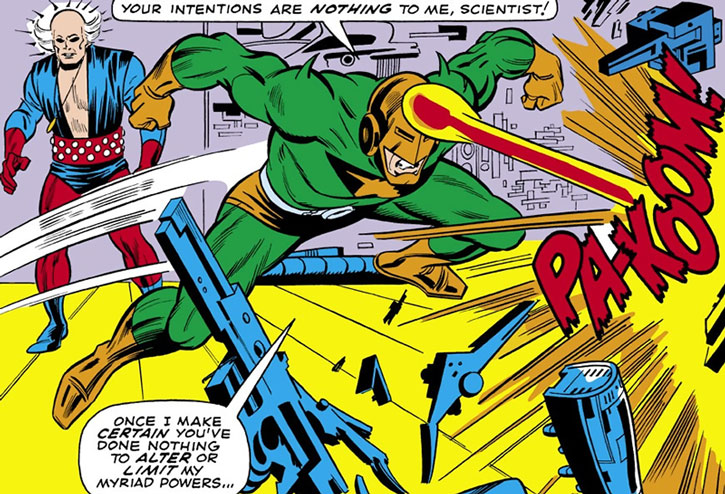 Unicorn is proof that by 1964, the comic book writers at Marvel had run out of dreadful animals to name their villains with. So they chose a mythical one. But instead of Griffin, Chimera or Basilisk, they chose the Unicorn. This is the very animal that adorns the walls of young boys and girls. This is the same bubbly-eyed animal you think of running down the rainbow every time you want to think of something pleasant and soothing. The guys at Marvel Comics thought that by adding a preceding moniker they would salvage the situation. The villain was called the Uncanny Unicorn. Yeah that changes everything. Thank you Marvel!! And do we even need to start with that god awful, ridiculously stupid and might we say a tad bit suggestive helmet? We will leave it at that!! Please don’t ask us to continue!!