As teased last month in the over-sized THE   Incoming, the Marvel universe is launching headfirst into its first event of the year in the Empyre. Keeping pace with other massive Marvel events of this kind, Empyre has been touted as a universe-shaping event featuring some of the biggest characters to ever reside within the Marvel mythos, as the Avengers, Fantastic Four, and X-Men face off against the Kree and Skrulls.

Marvel Universe is launching its first event of the year: The Empyre

Empyre will see Teddy Altman — the character better known as the Hulkling — rise to power over a faction consisting of the aforementioned Kree and Skrulls, a sort of notable development as the two alien races have been at war for quite some fraction of time in-universe. Coincidentally enough, both of the races have recently been introduced on-screen within the Marvel Cinematic Universe. Technically, the Kree were introduced years ago within the events of ABC’s Agents of SHIELD and finally, the Skrulls appeared in live-action in Captain Marvel as a staunch opponent to the Kree, sticking true to their comic book roots.

But let’s take a step back and look at the event as a whole. Empyre will likely be the first event developed by Marvel Comics where the company’s Studios counterpart had live-action rights to the vast majority of the characters used. Sure, not counting Spider-Man and his family of characters — still owned by Sony Pictures — it’s the first event in quite some time to use the Fantastic Four in a starring role, assets Marvel Studios received about Disney purchased 20th Century.

Then there’s the tweak of the Skrulls characters, or at least the ones we’ve seen on-screen so far. In the comics, the characters are widely considered pests and nuisances, if not downright villainous most of the time. But the versions we’ve gotten in live-action, thanks to Ben Mendelsohn’s Talos and his supporting cast, have been nicer and more sympathetic, perhaps easier to deal with than angry aliens shut off from the rest of the universe.

Addition of Hulkling to the MCU 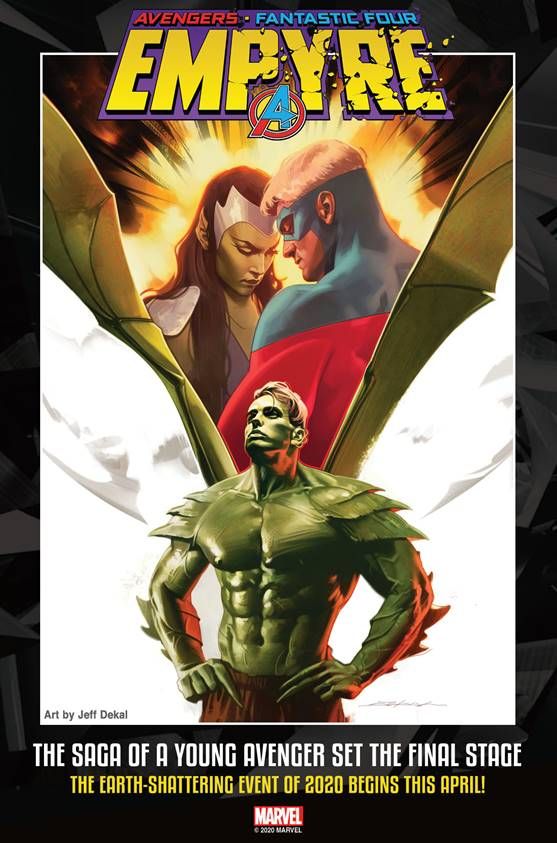 Finally, there’s the addition of Hulkling, a character many have speculated would be joining the Marvel Cinematic Universe sooner rather than later. In fact, there have been some rumors coming from the various scooping factions you’ve all heard online the character could be cast in the coming weeks for a property as soon as THE Wanda Vision. Again, that’s nothing but conjecture at the moment but at the very least, the timing of both his casting and the launch of Empyre would seem suspect.

With Avengers: Endgame now out of the way, the Marvel Cinematic Universe will eventually slowly start crawling towards its next crossover flick and if Disney wants to make more than Endgame, they’re going to have to have a mega-event flick on their hands.

Empyre is set to launch in A.