The Marvel Cinematic Universe is changing, and it’s long past time for one character to get their due. With Jane Foster set to wield Mjolnir as the next Thor in Thor: Love and Thunder and Sam Wilson inheriting Captain America’s shield in Avengers: Endgame, the next phase of Marvel development is ripe and ready to pass the torch and let new characters enjoy the spotlight. The move seems like one that goes in the right direction toward diversity and inclusion, but there’s one demographic that has been thus far ignored: the cybernetic space horse. The time is more than ready for Beta Ray Bill. 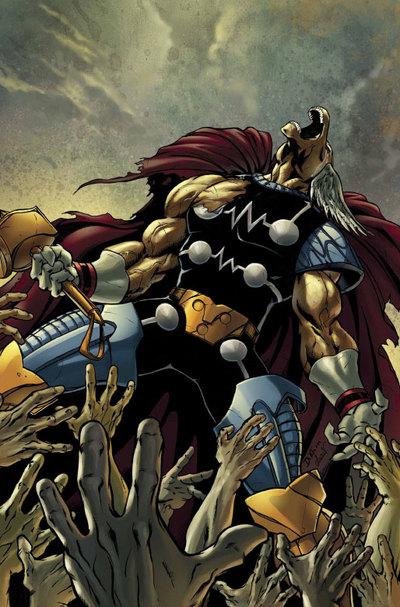 Even those not intimately familiar with the character might recognize him rather easily. Creator Walt Simonson designed Beta Ray Bill to have a distinctive look that did not seem instantly recognizable as either heroic or villainous. His equine features of common of the alien race he hails from, and the everyman moniker “Bill” helps establish the character as a perfect union between the fantastical and the mundane. As one of the inheritors of Thor’s hammer Mjolnir, Beta Ray Bill has been swinging through the Marvel cosmos since 1983.

When the character was first introduced it was as the champion of a near-extinct alien race who comes into physical conflict with Thor. During a moment in their battle when Thor became incapacitated Beta Ray lifted Mjolnir himself, proving himself worthy of the weapon and imbuing him with Thor’s powers. He later verified his worthiness in a trial by combat, and eventually gained his own magical weapon.

Known as Stormbreaker, the weapon was half-hammer and half-axe, and audiences may already recognize it as the weapon Thor first gained in Avengers: Infinity War.

The MCU came within a hair’s width of introducing him directly in Thor: Ragnarok. Producer Kevin Feige said that the character had a small cameo that was ultimately cut because it just didn’t do the character justice. While it may be a shame to not have the character appear just yet, the restraint expressed by Feige shows that when Marvel does Beta Ray Bill they want to do him right.

A short cameo of Beta Ray Bill was introduced in Thor : Ragnarok

Though the scene was cut, a Beta Ray Bill Easter egg did remain in the film. Seen during an exterior shot on Sakaar, Beta Ray’s distinctive visage stands in statuesque form on the facade of the Sakaarian palace. The implication is that he is a figure of honor, and perhaps much like Hulk in the film, he is a previous champion in the gladiatorial arena that served as much of the film’s setting. The detail would certainly echo Beta Ray’s appearance alongside Hulk in the animated feature Planet Hulk,

in which the two fought fiercely against one another in the arena.

Thor: Love and Thunder would be the perfect opportunity to introduce and flesh out the character to give him his proper due. With Jane Foster set to take up the Thor mantle, he could prove the perfect rival against which Jane would need to establish herself as truly worthy. With Thor himself gallivanting around space with the Guardians of the Galaxy, there’s no doubt that Jane could benefit from a supporting cast and mentor in super heroics to flesh out the film.

Frankly, director Taika Waititi is perhaps one of the few creative minds who could truly pull off a concept as ridiculous and fun as Beta Ray Bill while still making the character feel heartfelt and real. Already hitting it out of the ballpark with his own performance as Korg, in Waititi’s hands, Beta Ray Bill could potentially be a scene stealer-and show-stopper. Even if fans don’t know it yet, this is exactly the character they’re chomping at the bit for.