The most famous “level 9000′ meme from the Dragon Ball franchise has been adapted in various ways. But it accurately describes what the entire show is about- power levels. Throughout the course of the series, Goku and Vegeta’s transformations and power level have progressed so far that both of them can be called a god. But that’s pretty much it when it comes to supremely powerful beings in the Dragon Ball universe. The power distribution in his universe has been severely uneven. But all that’s going to change because one of the most popular Z-Fighters is about to get a major power-up.

The fighter who is about to receive a power up is none other than Piccolo. It can’t be denied that Piccolo is a fan favourite. Before Vegeta, Piccolo had one of the most dynamic character arcs of any character in Dragon Ball. He began the series as a demonic villain but eventually became one of Goku’s closest allies. His leadership and tactical wisdom kept him at the forefront of the series during Dragon Ball Z. But like so many of the other Z-Fighter characters, Dragon Ball Super kind of left Piccolo’s character arc in limbo. Since then Piccolo has been a great mentor, advisor, trainer and even babysitter. But that’s not the role he was intended for. Thankfully, the DBS manga’s “Galactic Patrol Prisoner” arc has provided the opportunity for Piccolo to get a much delayed power-up.

Piccolo Finally Gets The Chance To Power Up

A new villain has emerged in the “Galactic Patrol Prisoner” arc. He is named “Planet-Eater Moro”. Moro  broke out of the Galactic Patrol prison after ten million years, and went on a mission to invade New Namek and secure the Namekian Dragon Balls. He does eventually get the dragon balls after terrorizing New Namek. He also makes the wish which restores his dark powers along with empowering his own gang of convicts. Moro then consumes all life-force from New Namek and its inhabitants, leaving the planet dead. Only Piccolo, Dende, and the young new Namekian healer Esca are the only surviving Nameks in the uinverse. But Moro isn’t just satisfied with just that, he is headed to Earth next.

Piccolo battle’s Moro’s gang and manages to get the best of them. But Moro and his top leaders are way more powerful than that. With Vegeta and Goku off-world to pursue new forms of training to defeat Moro, this leaves the Z-Fighters getting drafted into the Galactic Patrol to defend Earth on their own. So now Piccolo has all the reason to break his limits and get vengeance for his people and defend Earth. Hopefully we are able to see in this in the Dragon Ball Super movie.

Dragon Ball Super airs its English dub on Adult Swim during the Toonami programming block on Saturday evenings. It is also available for streaming on Funimation and Amazon Video.

Check out Piccolo’s all forms and transformations in the video below: 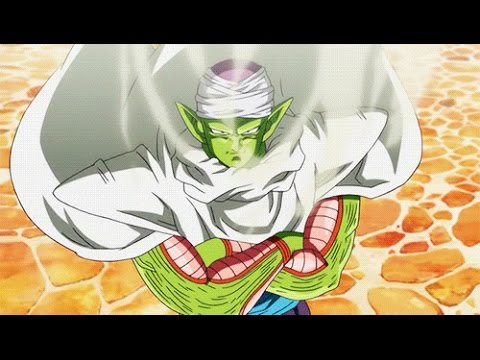