By the end of Avengers: Endgame, Thor (Chris Hemsworth) was on board The Benatar, seemingly set to travel the cosmos with the Guardians of the Galaxy. 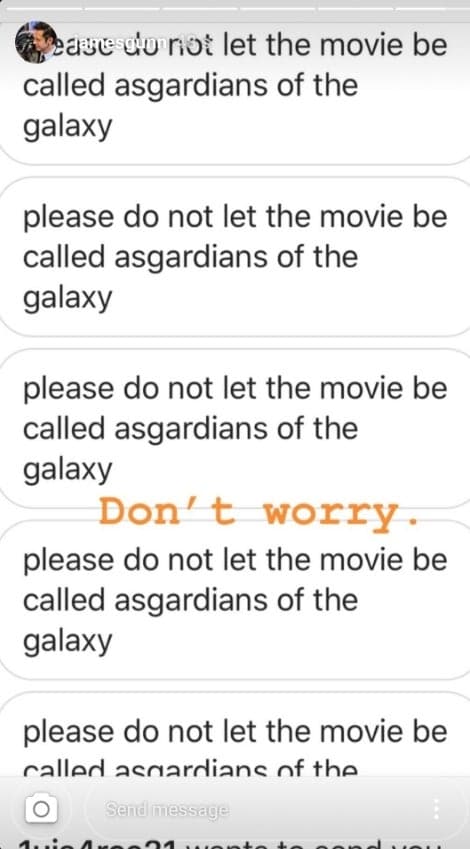 It appears now that’s simply not the case. While posting several of the messages he got in his DM inbox on Instagram, Guardians of the Galaxy director James Gunn told fans “don’t worry” about the film changing names.

Hemsworth says he will love being a part of the film

On the press tour for Men in Black: International, Hemsworth himself said he’d love appearing in Guardians of the Galaxy Vol. 3alongside the likes of Chris Pratt, Zoe Saldana, and company, though he admitted he wasn’t sure when (or if, for that matter) the movie would be filming.

“I’d play that character [Thor] again. I love it so much – especially if there’s something unique to do again with it. I felt like the last three films were very, very different each time. It really felt like a totally different character. And I don’t even know when or if they’re shooting [Guardians of the Galaxy 3],” Hemsworth said.

“I’ll work with any of those guys. Asgardians Of The Galaxy. That’s actually great. You might’ve just got me my next job. Thank you, man.”

While many characters had their arcs wrapped in Avengers: Endgame, like Black Widow, Iron Man, and Captain America, Thor was one of the only original Avengers to seemingly get a new arc by the end, giving up reign of New Asgard to Tessa Thompson’s Valkyrie just so he could go with the Guardians of the Galaxy

Avengers: Endgame returns to theaters this weekend with a re-release while Spider-Man: Far From Home swings into theaters on July 2nd. Captain Marvel is now available wherever movies are sold.
Source: comicbook,Pinkvilla
Tags •Guardians Of The Galaxy 3James GunnMCUThorThor: Ragnarok