To all the Jason Momoa female fans, if you’re getting clicked with the star at a comic con, be sure to bring your boyfriend as a hilarious prop.

Momoa who is set to land in theatres as Aquaman, paid a visit to the Graham Norton show this week showed off some of his hilarious fan photos.

When asked by Norton “how he finds ways to make it fun” while meeting his fans, his answer was simple: hug one half of a couple while pushing the other half.

Here’s how the actor explained the common photo situation:

“Well, a married couple comes up and they wanna take a picture and then generally it’s the woman who wants to get the hug and they want me to push their husband away… or like kick him in the face.”

This shows an extremely confused guy who has just been ousted by Momoa. “He’s doing some acting,” Norton points out as the crowd laughs at the photo.

“This is just tragic,” the host jokes, “I feel like he just got a girlfriend.” The crowd goes wild as Orton continues to speculate the history of the picture. “He’s properly upset,” he adds.

“This last one if kind of doubly cruel,” Norton points out. Not only did Momoa steal this man’s lady, but he signed over the dude’s face. Brilliant. Hilarious. Ruthless. 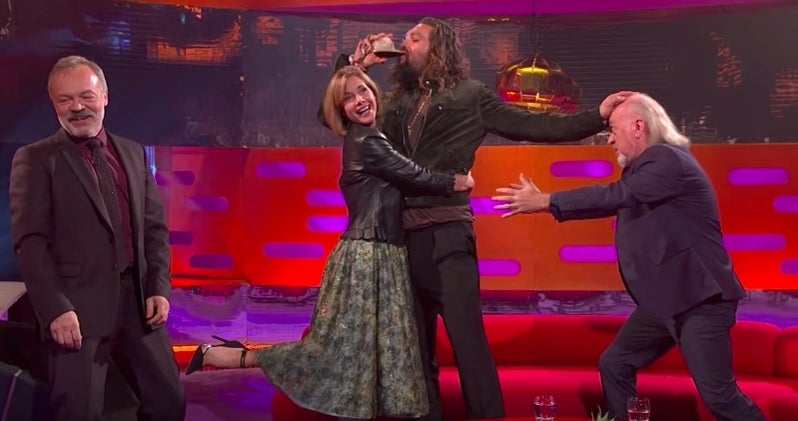 Norton decided to recreate Momoa’s favourite pose with his other guests, and you can see Bill Bailey (musician/wildlife enthusiast) and Darcey Bussell (Strictly Come Dancing).