Various leaked set photos and sources have earlier revealed that Renner is confirmed to return in Avengers 4. Many fans were earlier pissed off at MCU for not including Hawkeye in Infinity War. Hawkeye has around since 2012’s Avengers and is seen as a prominent figure in the Marvel Universe. 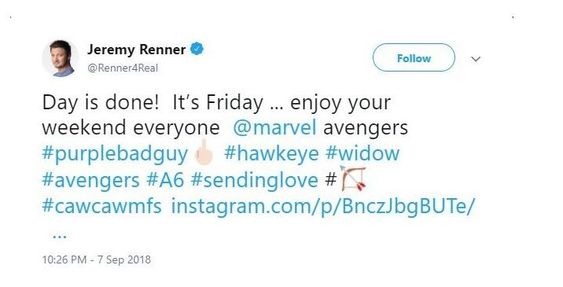 The captions used in the tweet include the #purplebadguy which clearly hints at Thanos, portrayed by Josh Brolin. The second hashtag was his character, #hawkeye itself while third #widow points at Black Widow, as both Hawkeye and Widow were partners in SHIELD before Avengers.

However, the last hashtag says #A6 which reveals the original six Avengers who started the journey in 2012. All six of them namely Thor, Captain America, Iron Man, Hulk, Black Widow, and Hawkeye. All of them have survived the snap and will the teaming up for one last time before Renner, Robert Downey Jr. and Chris Evans leave the MCU post the end of their contracts.

All original six Avengers have immortalized their characters by getting a matching A6 tattoo. Here’s what Kevin Feige had to say about it:

“We (at Marvel) love Hawkeye. There are big, big story things coming up for Hawkeye and Jeremy Renner is as strong as an actor as anyone in the MCU and an awesome as this character. But, ‘the guy with the bow and arrow jokes’, right? There are a lot of ‘Guys with bow and arrow jokes.’ He even makes ‘Guy with a bow and arrow’ jokes in some movies. So I love people go from ‘Oh, Hawkeye is just lucky to be there,’ to ‘oh, where is he? He’s not there? What’s going to happen? We need Hawkeye, We want more Hawkeye.’ I love it. It’s the best.”

Avengers 4 will release on May 3 next year.