Hugh Jackman and Ryan Reynolds share a history of hilarious exchanges across social media, thanks to Reynold’s Deadpool linked with Jackman’s Wolverine. Now John Krasinski, known for his role in The Office posted a photo of Jackman shared of himself posing with John’s wife Emily Blunt, which ignited a feud between the three actors.

It all started with Jackman sharing a photo with The Front Runner co-star Emily Blunt. Krasinski replied with a more intimate photo of the actors, adding “Eeeeeeasy Hugh… not sure this is what Variety meant with #ActorsonActors….Don’t make me think I can hurt you.” 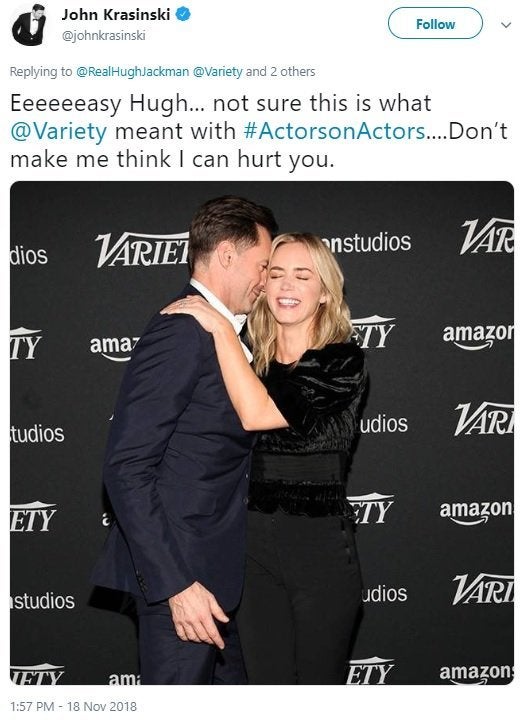 Reynolds saw this and replied, “This is a call to action. This man must be stopped.”

“You gotta stay on your toes, John,” Jackman shared with Variety after the exchanges. “That’s all I’m saying.”

While Jackman had no issue taking the abuse online from the two, he hoped that his opponents would attack him at least once if it came to fisticuffs.

“I’m fine to fight John, but he arrived this morning at my front door with Ryan,” the actor joked. “I’m like, ‘Come on, guys. One at a time. Not together.”

Jackman’s reprisal of 2000’s X-Men as Wolverine although his proclivities for music and countless interviews has given him a charming persona in Hollywood.

“I’m really creating all these feuds,” Jackman admitted. “This mister nice guy image is over.”

After Reynolds revived the character with Deadpool in 2016, the fourth wall breaking movie had many jokes about his onscreen appearance but also takes a jab at Jackman specifically. The trend continued with Deadpool 2, and will likely go on for long till Reynolds, Jackman, and now Krasinski all have active social media accounts.