There are a lot of secrets hidden deep within this cult classic franchise that Steven Spielberg would like to remain buried. If you look below, there are facts that might astound you, changing the way you viewed the Jurassic Park franchise forever. 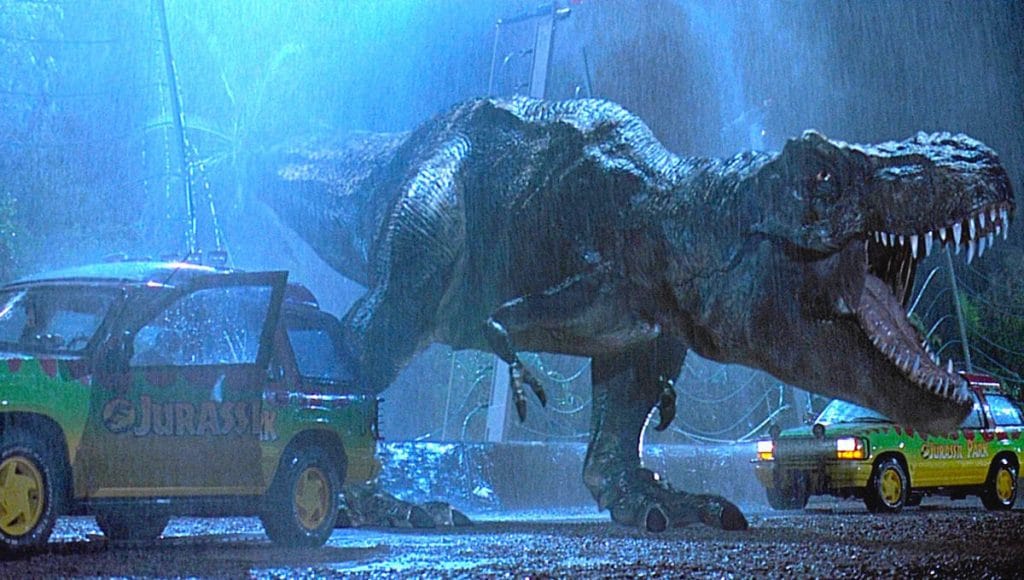 The T-Rex from the original 1993 movie is said to be one of the most classic monsters of Hollywood. Instead of sheer CGI, Spielberg went for the animatronic route. A giant robot with thousands of moving mechanical parts controlled by servos powered by electric motors were constructed and dressed up as a T-Rex. Many times the shooting was carried out during the rain. The T-Rex was not exactly designed to be waterproof. Water would sometimes seep in and the T-Rex would momentarily come alive, its eyes glowing due to the circuits being shorted. The crew was so scared by these events they thought the T-Rex was cursed.

The Movie features Utahraptors, not Velociraptors 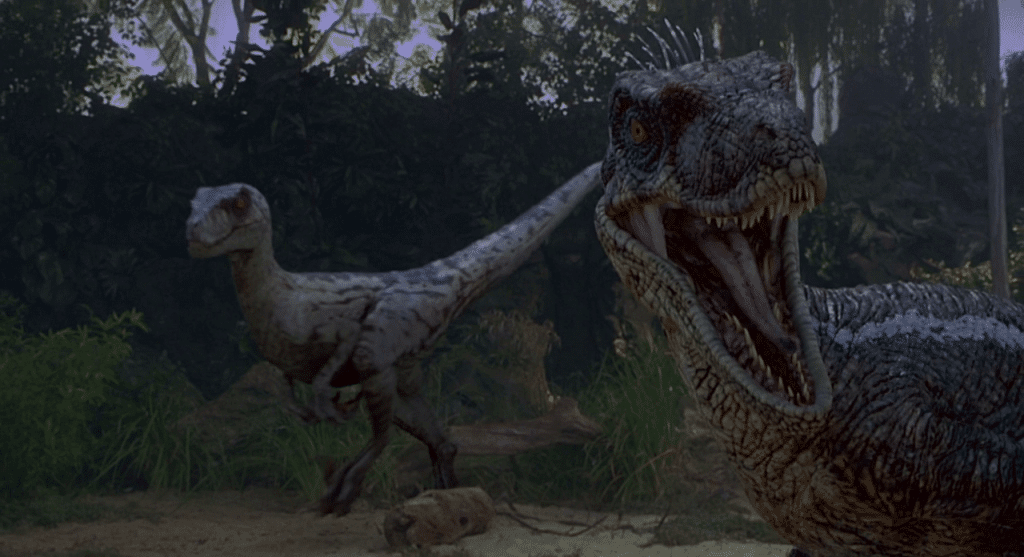 Steven Spielberg has a knack for dramatic effect. In Jurassic Park 3, the Velociraptors that were featured were not actually ones belonging to the said species. In reality, Velociraptors never grow more than 10 feet in height. Spielberg intentionally enhanced their size for the movie. So technically they were not Velociraptors to begin with. While filming the famous kitchen scene, researchers and palaeontologists working on a dig in another part of the world found a species of raptors that actually grow well beyond the size limit of velociraptors. This newly discovered species were called the Utahraptors. So in the movie, you were actually seeing Utahraptors in action. 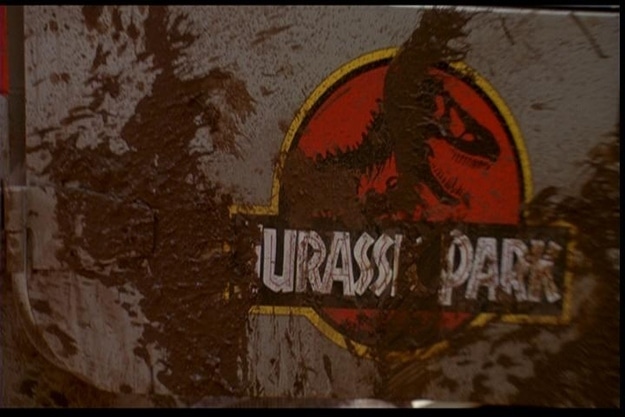 At the end of the first Jurassic Park movie, the remaining crew that were on the island are being evacuated via helicopter. Before they are about to leave, the Jurassic Park logo could be seen in the background. Mud has covered almost the entire logo, showing only a few letters of the words Jurassic Park. It reads *URASS** PARK. That was intentionally done. Some say that Spielberg himself instructed the camera crew to smear mud on the logo and make it look that way.

Ariana Richards’ scream was why she was cast 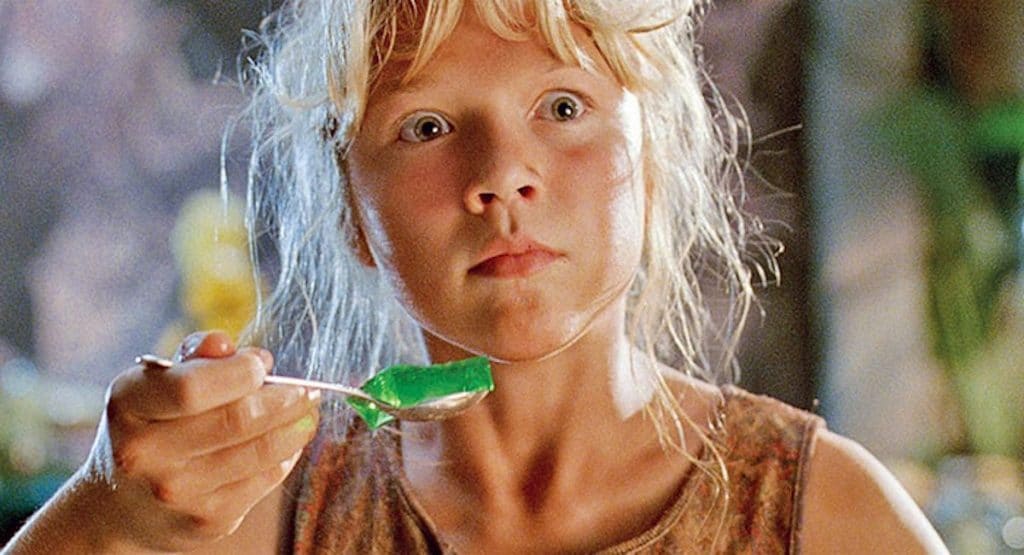 Spielberg auditioned many children for the role of Hammond’s Daughter. To get the most out of his actors, he wanted the candidates to scream as loud as possible. Ariana Richards screamed so loudly that it woke up Spielberg’s wife who hurried down the hall to see if her own children were alright and nothing had happened to them. Spielberg said that his wife is the soundest sleeper he ever knew. When Ariana Richards did the impossible, Spielberg instantly gave her the role and cancelled all the other auditions.

David Koepp is a very successful screen-play writer and a scribe who was worked for some huge Hollywood movie projects. He also had a huge role to play behind the camera in Jurassic Park: The Lost World. He also acted in the movie. He was the guy that was eaten alive by the T-Rex. When the credits roll, David Koepp’s name does come up among the many supporting cast members. But he is credited as “The Unlucky Bastard”. Go figure!!

The Largest Animatronic Robot in the franchise was the Spinosaurus, not the T-Rex 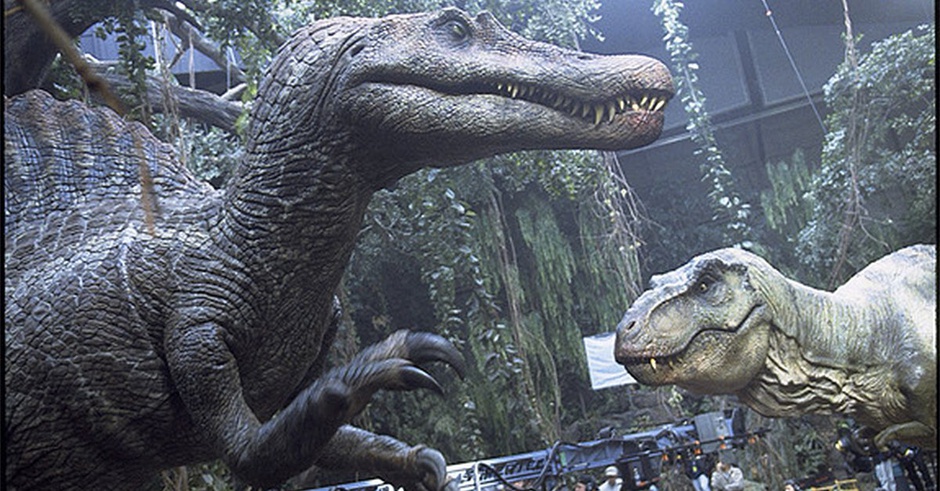 The T-Rex weighed between 10-12 tonnes. It was a massive robot that needed several teams to be carried around and work with. But it was not the biggest animatronic built for the series. That honor goes to the Spinosaurus robot. It did not just have a size weigh bigger than the T-Rex, it also had a weight that outclassed the T-Rex’s weight by more than 2 tonnes. That’s right. The Spinosaurus weighed more than 12 tonnes in weight. It had a 1000 HP engine that could rotate the tip of the robot with a speed of more than 100 miles an hour. 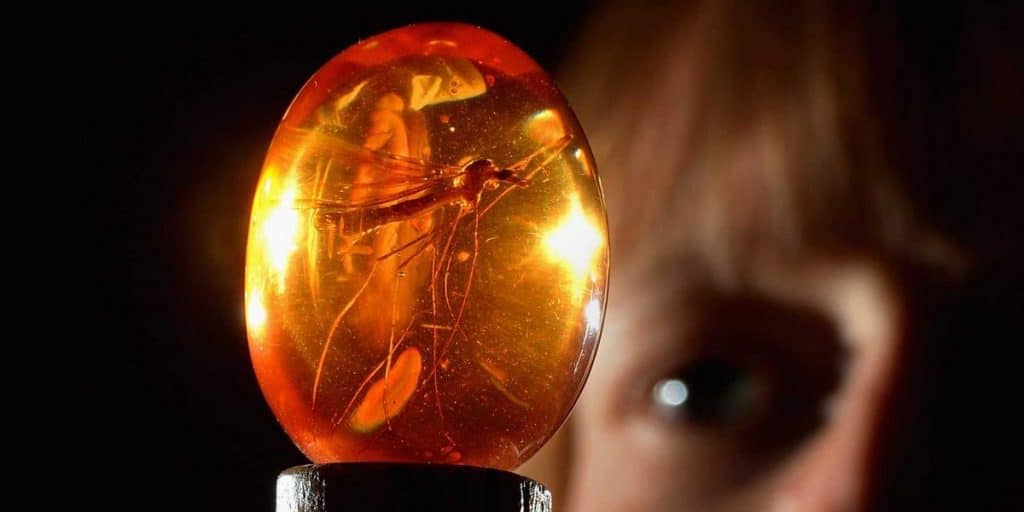 There were several prehistoric species of mosquitoes that never made it to the modern era. Many species from those times still exist in the 21st Century. One species that did not make it was the Elephant Mosquito. The Elephant Mosquito is also a rare species. Why is it so? Because it is one of the few species of mosquitoes that do not rely on sucking blood for sustaining them-selves! Blood is not their source of food. They rely on fruits for sustenance. So the concept of using the blood stored in the belly of an Elephant Mosquito to recreate the DNA of the dinosaurs is a bid damn farce. The idea sounds even more whimsical and impossible. 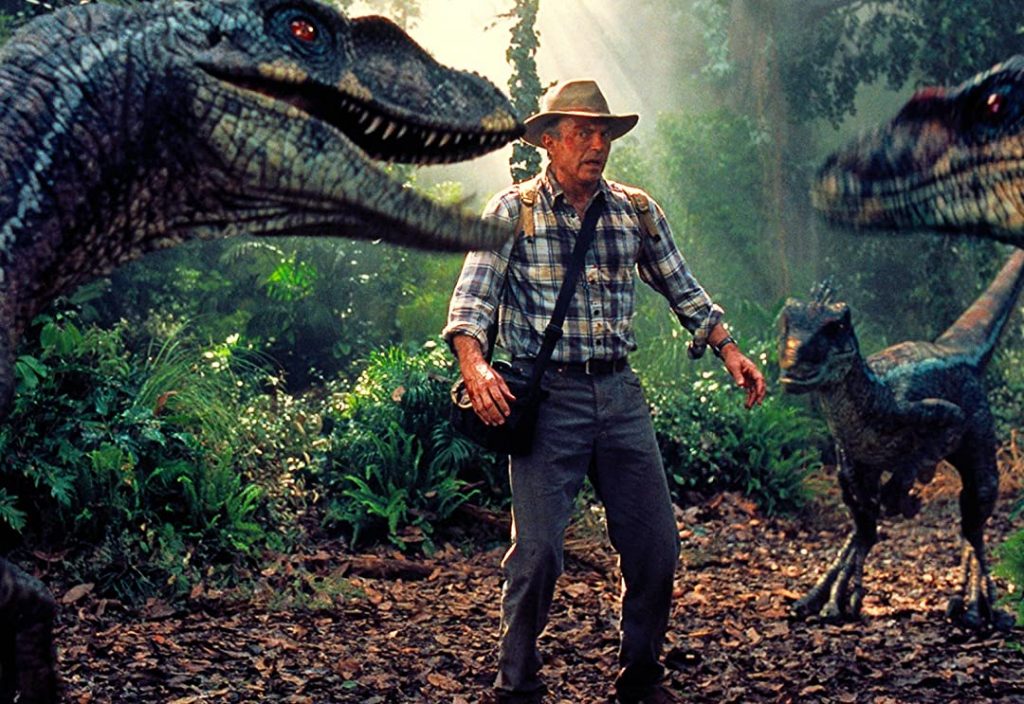 The Raptors were mostly recreated using CGI imagery. While the T-Rex was done so using conventional methods, CGI was the perfect choice for the smaller predators. During filming, there were scenes where the actors had to be in the same frame as the raptors. To ensure the emotions and expressions of the actors were genuine, Spielberg hired artists and sculptors from around the world to create perfect, life like replicas. The life size models were genuinely scary. After the movie’s shooting was done, they were given as a gift to each of the cast members of the movie. They had the signature of Steven Spielberg as a token of gratitude. Mr Spielberg, refrain from choosing a gift for my birthday please.

There were safety concerns regarding the T-Rex 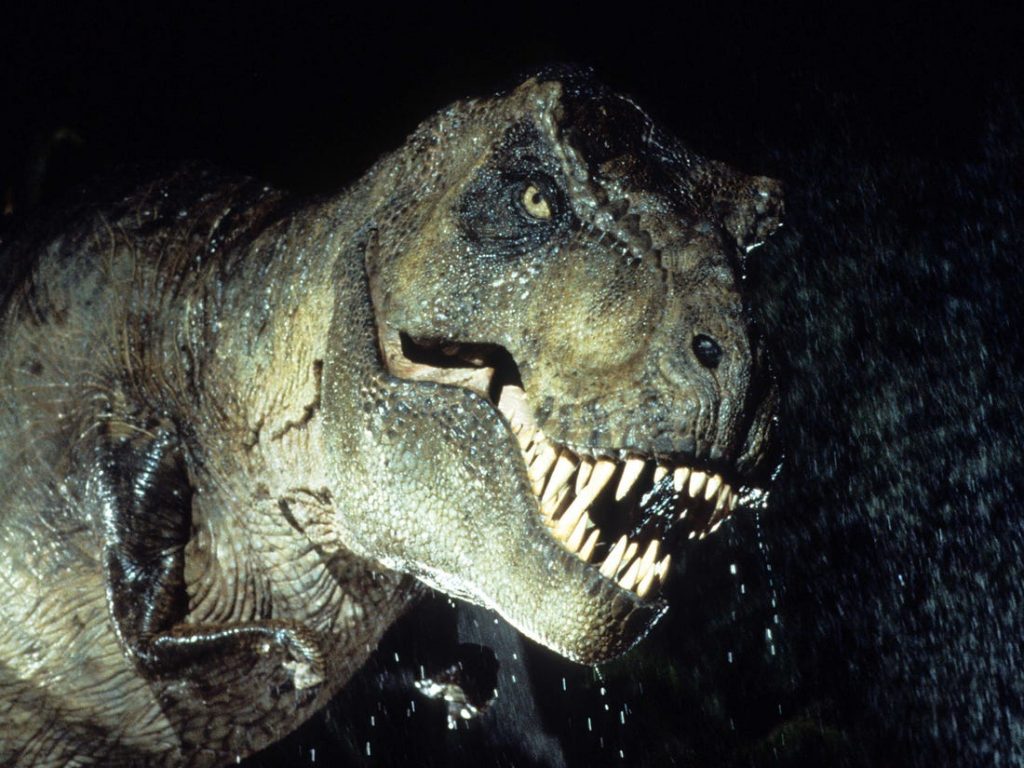 The T-Rex robot weighed more than 10,000 pounds. It had to be moved around in a truck. Moreover it had some pretty powerful servos to move it around. There is a reason there was a safety board committee set up just for the handling and maintenance of the T-Rex module. The servos were so powerful that the T-Rex could move around with a speed that matched that of a speeding bus. If any person was caught within the trajectory of the movements of the T-Rex, they would at best receive multiple cracked ribs and at worst, die from intense pain and agony due to blunt force trauma. The T-Rex was a liability throughout the production of the movie.

Jurassic World and Jurassic Park have the same T-Rex 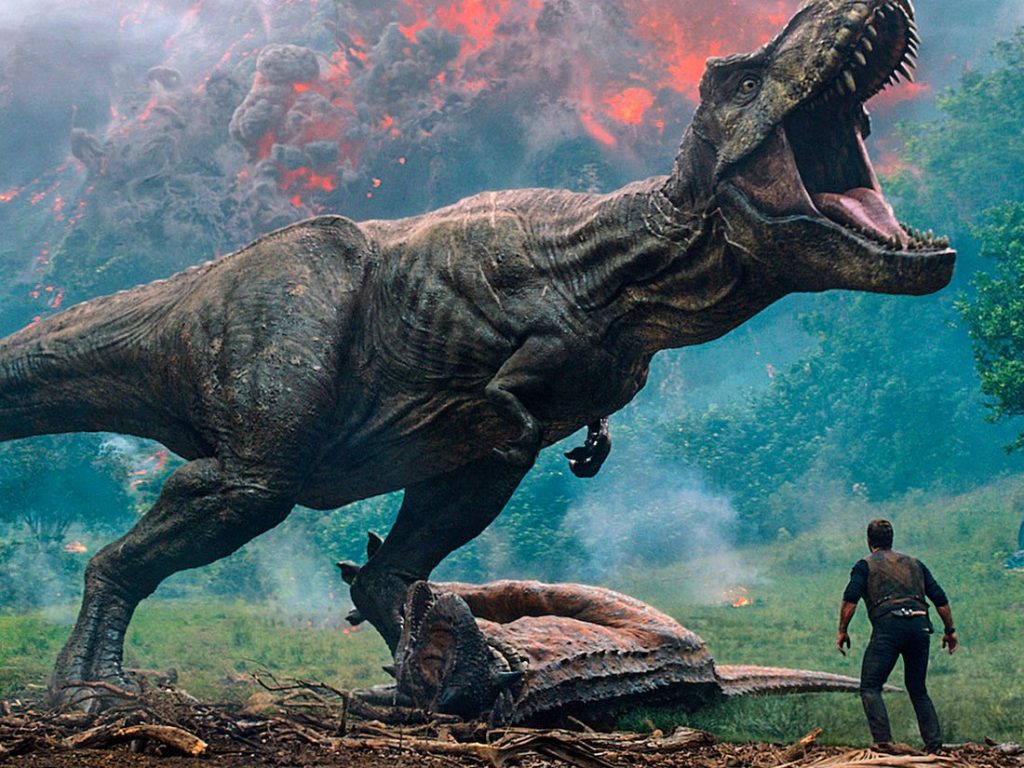 Jurassic World is the modern 21st Century re-imagining of the classic Jurassic Park franchise. There are new dinosaurs and many more creatures that were not seen in the original trilogy. But there is one creature that has managed to crawl in from the legacy movies to the newer ones. The T-Rex we see in Jurassic Park is also there in Jurassic World. If you watch closely, you will see there is a T-Rex with scars on the upper side of its neck in Jurassic World. The scars match the ones the T-Rex from the Jurassic Park trilogy received during a battle with smaller velociraptors.