A recent theory explains that Marvel Cinematic Universe’s Kang the Conqueror will kill Ant-Man in the upcoming Ant-Man and the Wasp: Quantumania. 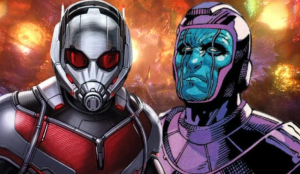 Even before playing He Who Remains in Marvel and Disney+ series, Loki, it was confirmed that Kang the Conqueror will be there in the MCU. The character was confirmed to play a villain in Ant-Man and the Wasp: Quantumania. Well, what exactly he will do in the film is still not revealed for some obvious reasons, but Loki has guaranteed one thing; Kang the Conqueror will going to be the next biggest villain in the Marvel Cinematic Universe.

With that said, in a new exclusive video, fans can clearly discover Kang the Conqueror as a huge threat to Earth’s superheroes, especially for Hank Pym. The video depicts that Ant-Man will die in its third feature film with Marvel Studios.

Ever since the character debuted in 2015, Ant-Man and his events have played an essential role in the Marvel Cinematic Universe. And now, the addition of Kang the Conqueror in the superhero life clears that Ant-Man and the Wasp: Quantumania will be a power-packed surprise for the fans.  What we have seen in Loki is a verbal version of Kang’s abilities. Thus, to prove his abilities and powers, Kang the Conqueror needs to defeat someone. While characters like Scott Lang still look relevant to help the plot of MCU move forward, Hank is necessarily not someone that needs to keep alive for that long. It becomes more logical when his reunion with Janet Van takes place in Ant-Man and the Wasp.

Click here to check the video out that explains Kang will kill Ant-Man in Ant-Man and the Wasp: Quantumania.

Considering the events that took place in Avengers: Endgame, it is still confusing to understand what the next phase of Marvel Cinematic Universe will look like? While there is a slight hint that Disney has acquired some characters from the 21st Century Fox, the confirmation is yet to show up.

As far as the current scenarios are concerned, there are a lot of potential ways for Marvel to shape up their future storyline. But what will they chose and how they will prepare the plot will remain to be seen.