The latest Marvel and Disney+ tv show What If…? has been making waves amongst the fans. With new episodes releasing every week, the show has kept the Marvel fans engaged. But several fans have not yet come out of the amazing viewing experience they had at the beginning of this year with WandaVision. When WandaVision hit the screens, fans haven’t stopped talking about the much-deserving screen time two of the popular characters got on the tv show. Kat Dennings Darcy Lewis and Randall Park’s Agent Woo, both had the time to shine in this tv series.

Now we all know that WandaVision was limited series. But could there be any possibility to bring back Darcy Lewis and Agent Woo on our screens? Kat Dennings shares her thoughts. 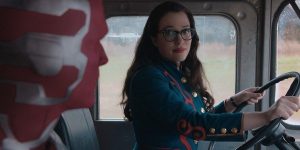 Kat Dennings’ Darcy Lewis was first seen in the initial Thor movies. But the character didn’t get much screen time. However, fans wanted more for this character for a long time. And when she came back to WandaVision, fans were ecstatic. Not merely because they would get to see the character on their screens but also because Darcy Lewis deserved more credit in Marvel movies.

So, when she was approached to bring back her fan-favorite character to life, she was quite excited. According to her, the power heard the voice of fans, thus allowing her to star in WandaVision.

One of the best things that came out of WandVision was when Darcy and Jimmy were standing in a single frame trying to figure out what was going on. Although both these characters come from different Marvel movies, the moments where both characters interact are fantastic. The banter, the bond, the chemistry, both these characters build in the tv series left the fans wanting for more. WandaVision had always been a limited series, but could the production studio get something out of these two characters? We need to wait!

Let’s keep our fingers crossed and hope for the best that our wish comes true!