Marvel’s Black Widow was recently released and is currently riding a mediocre wave. The movie was able to tell Natasha’s story between the time of Captain America: Civil War and Avengers: Infinity war. Nat finally reunited with her long-lost family, Yelena Belova, Melina, and Alexei, aka the Red Guardian. Together, they worked to take down the Red Room which was operated by General Dreykov. Recently, Feige took of Marvel Studios’ Twitter account and got active about Black Widow fan questions. With that, he also stated that fans will soon know if Yelena was snapped away in Avengers: Infinity War. 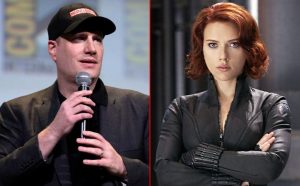 Recently, Feige got active on Twitter during Black Widow‘s watch party. He shared many things about the cast and gave some serious behind-the-scenes information. Speaking on that, Marvel Studios President said that he would want to see Rick Mason and Red Guardian further in the MCU. Moreover, he said that is pretty much interested in seeing Anthony Mackie’s Captain America vs., David Harbour’s Red Guardian.

But apart from all this, he gave us a serious implication. During the watch party, a fan asked if Feige knows whether Yelena got snapped away by Thanos in Avengers: Infinity War or not. Replying to that, he said that the fans will soon know if she got snapped away or not. He said,  “You will find out, but not on this Twitter thread.” The post-credits scene of Black Widow showed Yelena’s encounter with Valentina, who first appeared in The Falcon and The Winter Soldier. But soon after she hired Yelena for a hit job, with her next target being Hawkeye. This directly leads into the upcoming Disney+ series Hawkeye.

Yelena Belova’s Future In The MCU

Florence Pugh’s Yelena Belova definitely has a long future in the MCU. The same was implied in the post-credits scene. Moreover, it looks like she will have a surprise role in Hawkeye. The reason why would believe Valentina is because Clint Barton was the last person to be with Nat on Vormir. Plus, Valentina now has a history of recruiting people with a shady past but with a skill set. So far, she has John Walker under her wing, and now Yelena is a part of her team. She very well could be establishing the Dark Avengers or Thunderbolts. So, let’s see where we find ourselves regarding Yelena and Val.