Joker movie has gained applause from its fans in 2019. The character took inspiration by the DC comics and also has nominations in prestigious Oscars. However, the Joker lead, Joaquin Phoenix, seems like he is yet to leave the character. Recently, Joaquin Phoenix was arrested by police in Washington DC while he was protesting with few other celebs. This incident took over internet denizens quite light-heartedly.

What was the series of events?

The start of the decade went bumpy for Joaquin Phoenix as he was under a short-term arrest by police. The famous protest, which is popularly known as “Fire drill Friday” by Jane Fonda, is a climate change protest. The inspiration is drawn by young climate change activist Greta Thunberg’s protest around the Globe. Joaquin Phoenix was reportedly in this demonstration, which led to his arrest.

The reaction by fans on protest

The short-term protest by police in Washington DC led to the internet getting flooded by memes. The internet denizens, after all, know how to draw entertainment. The fans love to associate Joaquin’s real-life behavior with his reel-life character persona of Arthur Fleck. Jane Fonda’s protest led to the arrest of many other famous celebs which could be the reason for the increasing popularity of “Fire drill Friday.” Albeit other celebs were supporting Fonda on the front line, Joaquin managed to grab the attention of his fans as always.

Joaquin Phoenix is a person with strong beliefs and views, and he stands firm on them. This quality is seen in his real and reel life journey. It may land him in a soupy situation sometimes, but his aura is just unstoppable. The short term protest by police will soon lead to the walking of Joker lead on the streets, this time with more cred and love by his fans. 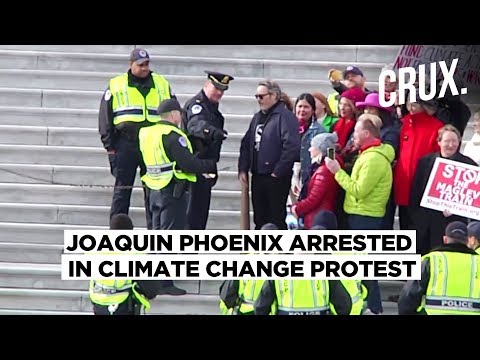 ‘How is this not nepotism?’: Internet Accuses Madonna of Enabling Nepo-Babies in Hollywood – All Her 6 Kids To Get Lucrative Gigs in ‘Celebration’ Tour

“I’m only going to do it once”: Brad Pitt Broke His Promise to Gwyneth Paltrow After Divorcing Angelina Jolie and Jennifer Aniston