Marvel is home to the world’s more powerful superheroes and villains like Captain America, Hulk Eternals, The Krees and mutants. Superhumans have walked on Earth since the advent of mankind as we learnt in Marvel Legacy.

This isn’t all it seems as there is actually a secret origin to the Marvel Universe. In Avengers #5, it’s shown that Loki reveals the truth behind the origins of Marvel Universe and why planet Earth is home to all these heroes.

The events of #5 start with Loki and his prisoner Captain America staring at a dead body of an ancient Celestial in the waters of North Pole. Here we see Loki explaining that this Celestial known as Progenitor is the reason behind humans developing superpowers.

It comes out that the Celestial was the first of his kind to be infected by space locusts called Horde. This infected Progenitor and he fell upon Earth which was then still in its molten state. The Celestial then bled and vomited his own radioactive black sludge which went on to stew into the lava and became the Earth, as we know it now. This, along with the Celestial Corpse of Progenitor altered the evolutionary state of the planet and became the reason behind some humans gaining enhancements. 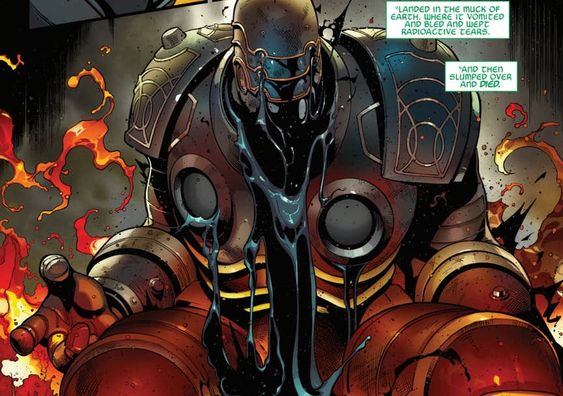 He even stated that this is what has set Earth apart from all other planets in the universe and there was no purpose behind it. It was rather just a cosmic accident that saw a Celestial crashing on young Earth.

This does make sense as it explains why so many individuals have been able to be altered by experiments and the existence of mutants like Apocalypse who walked on Earth in Egyptian times. Well, so it all came to life thanks to a deceased Celestial.