A Marvel Character who started as villain has become a fan favorite over the years, thanks to his humor and mischief fans have realized how much he was misunderstood and pushed aside.
Loki has received so much love from the Marvel Fans that his popularity has led to him getting his own TV series on Disney+.

Apart from being cunning, Loki has also been intelligent and helped Thor in many situations. We have witnessed a massive character development which proves that despite of his wickedness, he has a heart of gold ; the fact he tries to hide the same.
We have seen him making so many sacrifices for the greater good and  he developed his bond with his brother Thor – whom he couldn’t tolerate to sharing certain emotional feelings with him.
Here are some memes to make you ready before the Loki Series hits your screens! 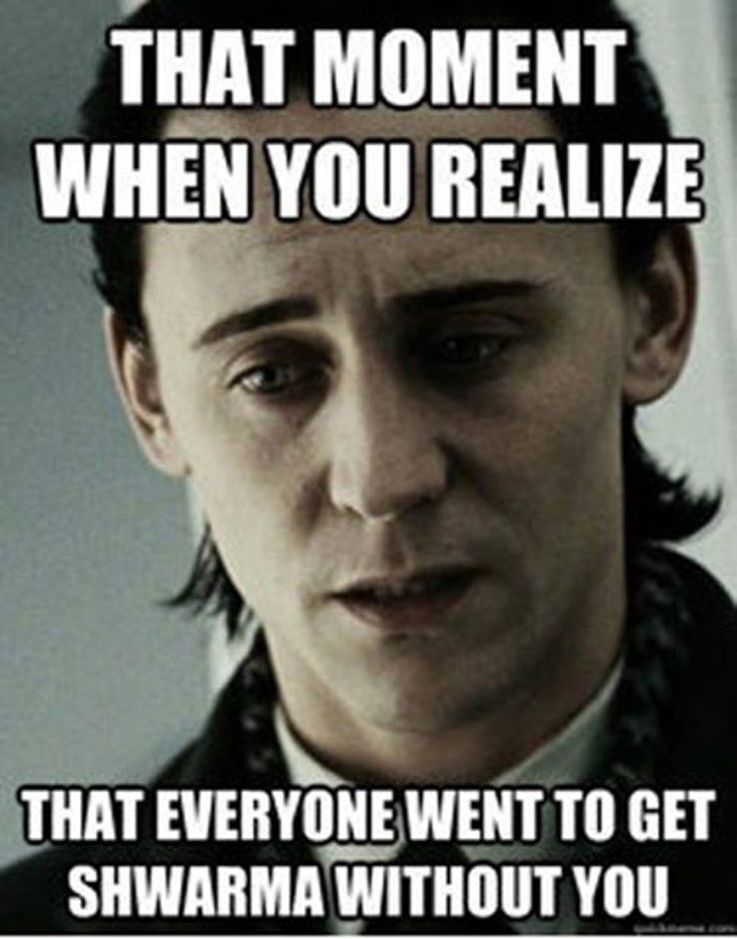 Remember Marvel’s First Avengers movie end credits scene?
Now before you  @ us , we know that nobody liked him back then as he was the main villain of the film.
But after so many Marvel movies , we know it was Thanos behind all of it that so many villains tries to push Avengers and other Marvel heroes to death. If we were to think about it, maybe he was not as bad as he was portrayed in the first Avengers movie. Maybe all he wanted was to grab a shawarma with the heroes! 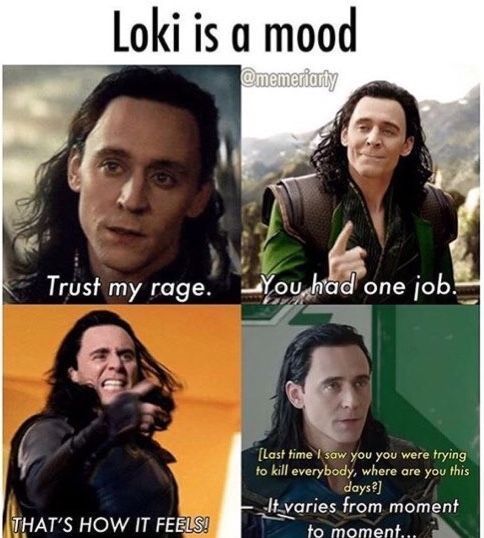 Loki is one of the most relatable Marvel character over the past 8 years. The first Thor movie has established the fact that even though Loki has tricks and lies up his sleeves, the reason is his troubled childhood and family.
Fans have found this very relatable the way Loki has a tough time dealing with his feelings.
This meme perfectly show cases his multi dimensional personality on every level. Loki , like all of us is afraid to express! 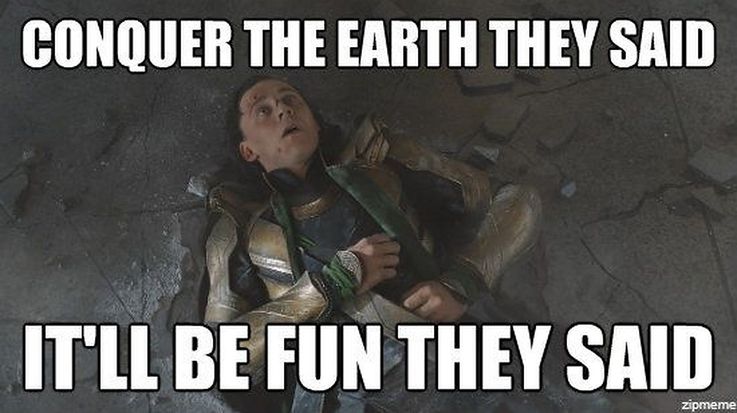 Phase Four of the Marvel Cinematic Universe will obviously introduce many villains but many fans will always consider Loki to be the favorite one. Obviously Loki’s logic of conquering Earth would be a good idea when Thanos talked him into it. But we all know Loki was literally bashed by Avengers (especially Hulk) and that definitely left him hurt.

What Loki Says vs What He Means 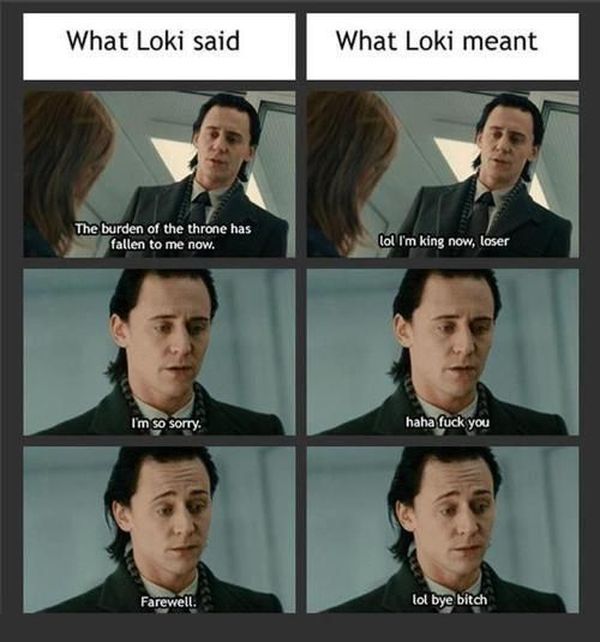 Another interesting thing about Loki and Thor as Asgardian princes is the language they use; the way they speak. Their speaking sounds more like that of Shakespearean era (It’s interesting that Tony Stark in Avengers himself joked calling Thor “Shakespeare in the park”). The fact that Loki, even though a villain, is polite, concise and clear with his language and speech.
This apart from making him funnier even makes him more likeable.

No, It is Tumblr 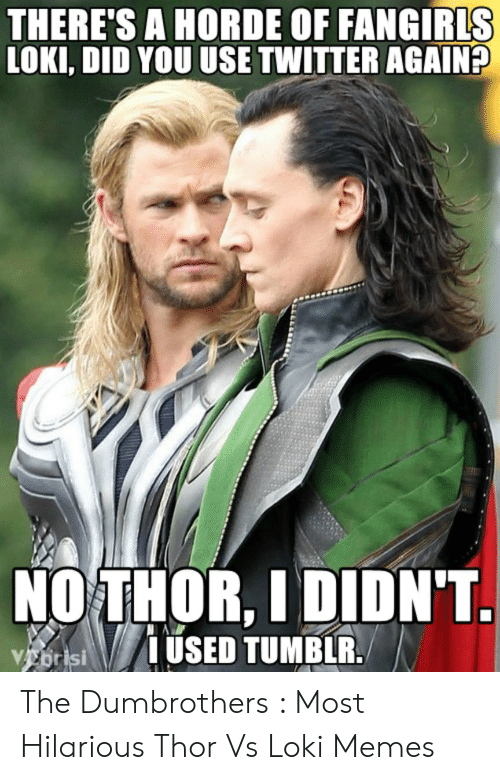 Well the credit of Loki’s fan following even goes to the actor Tom Hiddleston who plays the character. His immense talent of acting has given Loki the personality he has making him famous and favorite especially among fangirls.
This meme is making fun of the popular site Tumblr which is quite famous among mostly teenage girls who share pictures, fan arts, stories etc.
It is true that he has established a large female fanbase and the way Loki is, he would be enjoying this new fame.

Is He Really Dead? 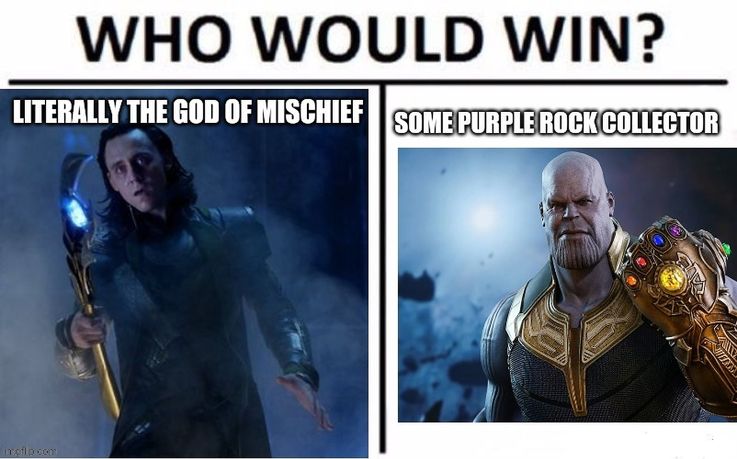 We are all still upset about his death in Avengers:Infinity War. It has divided the fanbase with different theories. Many find it nonsensical that how the God of Mischief could literally be killed so easily and in a lame way.
This meme also makes fun of Thanos’ powers considering he was powerful in the MCU.
Hopefully all our questions will be unanswered in the upcoming series.