In Thor’s far future, life in the universe has nearly extinguished. This is the current Thor story being told by Jason Aaron. The story misses on a major player from this alternate future, and now, they are back, more powerful than ever.

After spending centuries living among the ruins of Midgard until a fight against Galactus that spilt his blood on Earth, from which life began to grow, Thor cultivated a new form of humanity on the planet. Recent issues saw him travelling and finding out if they were alone, and the findings prove that all life in the universe is either decaying or extinct.

The only survivors were Wolverine and Doctor Doom. Wolverine is possessed by the Phoenix Force while Doom has acquired the powers of Iron Fist, Sorcerer Supreme and Ghost Rider. However, there are two more beings alive: Ego the Living Planet and a single worm on his own planet.

Known as Ego the Necroworld now, the once Living planet has now been consumed by an oil brought on by All-Black, the Necrosword. This weapon was introduced in 2012’s Thor: God of Thunder by Jason Aaron. It was wielded by Gorr the God Butcher.

Gorr carved his way through heavens using this weapon, seeking vengeance on all gods before he was brought down by Thor.

Now, although All Black rests within the Ego, twisting Ego into a Necroworld, he was challenged by a small green worm that lived on Ego’s surface. The worm, surprisingly, took Ego down, tearing the Necroworld into pieces.

After its victory, the worm demands nothing but the Necrosword. Ego agrees to him and the moment he hands him the sword, it turns out to be Loki. As it grows back, the worm declares that it should now be called Loki, The Necrogod or Loki the All-Butcher. 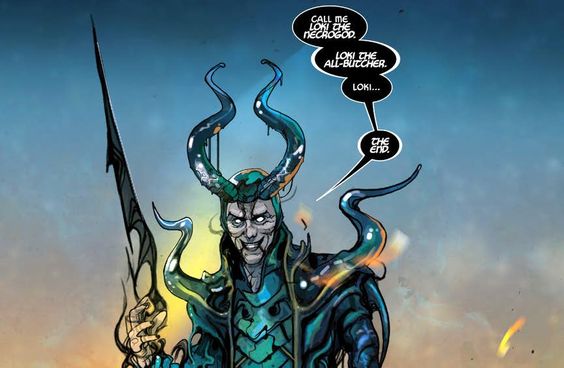 It makes sense that Loki managed to stay alive for all the while, and if anyone could transform into a worm and seek out the Necrosword, it would be him. Interestingly, Loki taking the name All-Butcher is a nod to Necrosword’s previous owner, Gorr.

The issue ends with “End of Interlude. End of Everything,” which suggests that the end of the universe suddenly got a bit closer. Given that Thor recently entered Forever Sleep after his long battle against Doom, the life on Earth is in peril.