Lord Of The Rings already had an amazing fanbase thanks to the books, but Peter Jackson’s movie helped to bring out some more life of the greatest fantasy books ever written in such fashion with the Hobbit movies recapturing a lot of magic as well.
The six movies into the world of the middle earth filled with elves, dwarves and hobbits proved to be popular worldwide and went on to win many Oscars and proved to be major box office successes!
And they also led to making Lord Of The Rings video games!
The entire franchise has time and again filled the imaginations of millions of people.
Here are some of the most interesting details fans have notice about Lord of The Rings

1. Legolas Has Always Had The Most Amazing Reactions!

All of us have at some point being obsessed about Legolas and in the entire series, Orlando Bloom has given the most priceless reactions.

2. Martin Freeman Did What He Does The Best 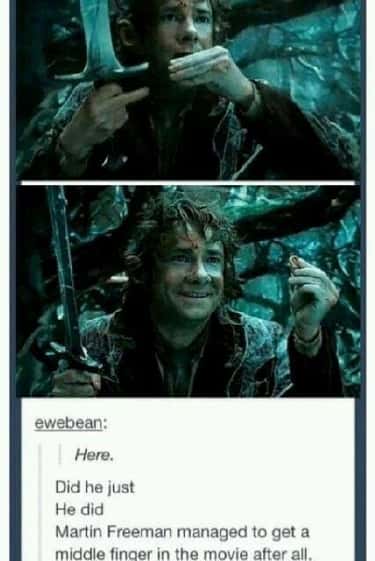 Martin Freeman is not exactly as serious as he portrays himself on the screen. And this time, he managed to sneak his middle finger in the movie.

3. When Complaining In Elvish Doesn’t Exactly Go As Planned 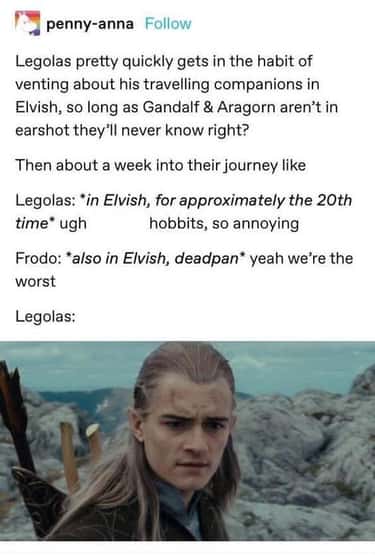 Like what were you thinking Legolas? You travel with them  and they won’t catch what you are saying?

4. No One Can Mess With Bilbo Baggins 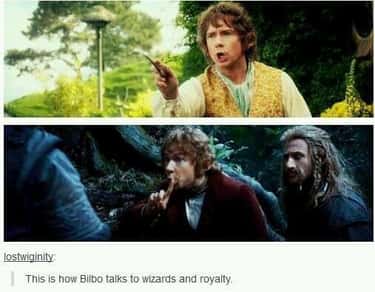 Bilbo literally has no chill when it comes to dealing with wizards and royalty. He Just Doesn’t Care. 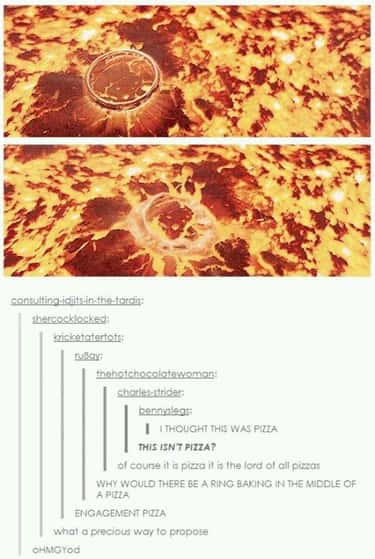 How did no one think about this? Mind Blowing.

6.  They Were Actually Singing In Elvish 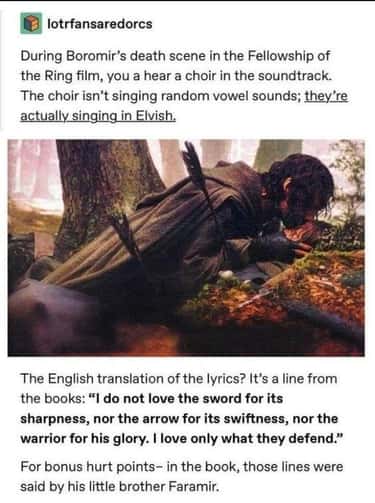 Who would have thought the beautiful track we were listening to was actually in Elvish?!

7.  Sam Gamgee Is More Than A Hero 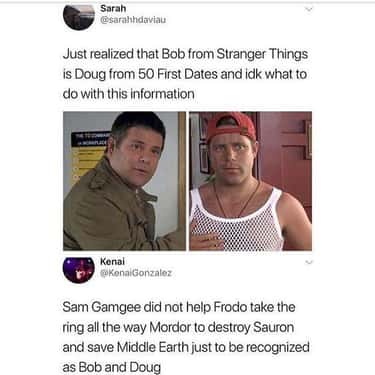 Personally, my mind blew when I realised that Doug and Sam were the same people. Sean Astin HAS to be recognised as Samwise Gamgee first.

8. We Can All Relate To Bilbo Baggins 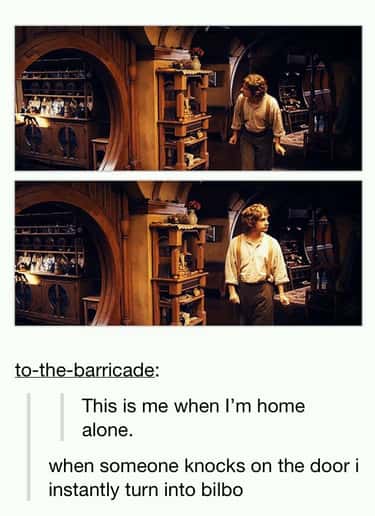 Come on! Let us be instead of coming and knocking at our doors.

9. Some Out Of Context Comedy 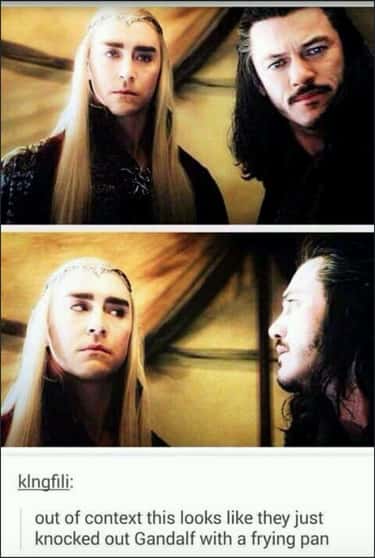 This scene looks as if they have done something really wrong and are trying to figure out how to not get caught for their actions.

10. The Awkward Sleepover Party In Mordor 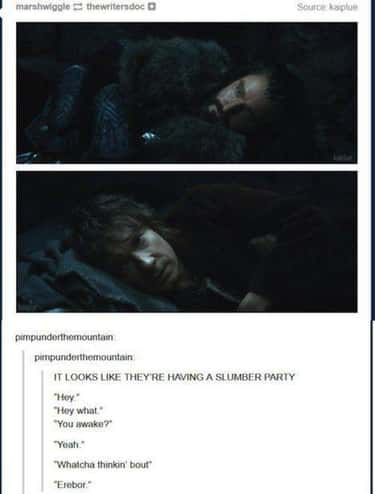 This is basically us at any sleepover; trying to see if anyone else is awake as well.

11. Do You Realise That We Are A Hobbit Short? 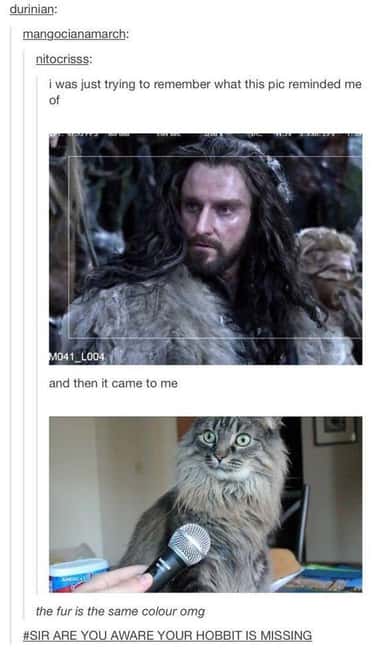 The resemblance is uncanny and can’t be unseen.

12. Can You Believe That It Took Them 47 Takes To Get This Scene Right 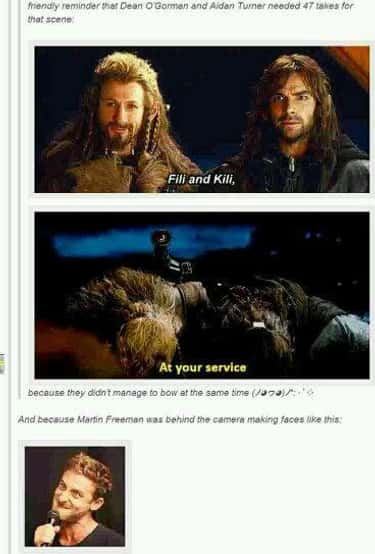 And we can absolutely understand the reasons it could have taken 47 takes. Imagine the amount of laughs going around every time they tried to get the shot right.
And of course, we totally trust Martin Freeman to make such faces to distract his costars behind the camera.

13. Martin Freeman’s ”  I Am So Done With This Man” Expressions. 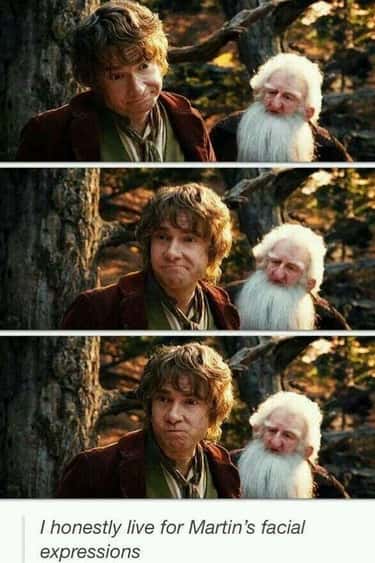 He is just so done and given up due to pure annoyance. 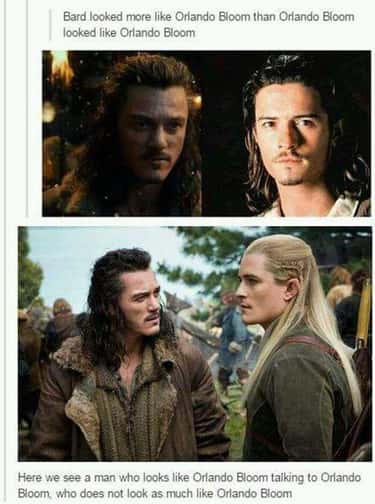