Marvel has yet again made the comic book fans excited by announcing that Luke Cage will be making a comeback to Marvel Comics later this year in October. Comic book fans will see this Marvel superhero in ‘Luke Cage: City of Fire’.

This three-issue comic book miniseries is set to explore the role of the superhero in the Harlem neighborhood and the larger Marvel Universe. The readers will also see Luke fighting two opponents, namely, the Regulators, a villain group, and the Harlem police after a black man is shot to death in his community. The comic book brings the socio-political background to the story. This will also bring him around Daredevil and the nemesis, Mayor Wilson Fisk.

‘Luke Cage: City of Fire’ is exciting news for comic book fans and Marvel Netflix fans. For a long time now, Marvel Netflix fans have wanted to see the inclusion of Netflix series characters such as Luke Cage and Daredevil into the Marvel Cinematic Universe canon. Thanks to Loki’s Multiverse expansion, these superhero characters also have a chance to make an appearance in the larger Marvel Universe.

‘Luke Cage: City of Fire’ can be seen by fans as a way for Marvel to test the prospect of including this superhero in the larger MCU canon. 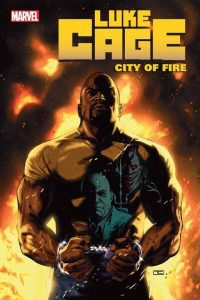 Synopsis: The comic opens with the Regulators, a villain group that is terrorizing the city of Harlem. A black man is killed by a rogue cop in Luke Cage’s neighborhood. The superhero is called to bring justice to the community. He is seen fighting the Harlem police to find the truth behind the man’s death. At the same time, Luke crosses paths with Daredevil who is fighting the Regulators and wants to bring them down. But Mayor Wilson Fisk tightens his grip on the city with such chaos. The city is on fire and it’s up to Luke Cage to bring the flames down from destroying the city.