The debate over who is the strongest Hulk has been going around since decades now. Earlier, we’ve seen Bruce Banner’s Jade Giant holding the mantle for a while and now, his new power-up in The Immortal Hulk storyline has made him a strong candidate again.

However, there have been other characters like Amadeus Cho, Red She-Hulk, Red Hulk and Bruce’s Son Skaar who have held the mantle for a while. Currently, the title is being held by Jen Walters aka She-Hulk. 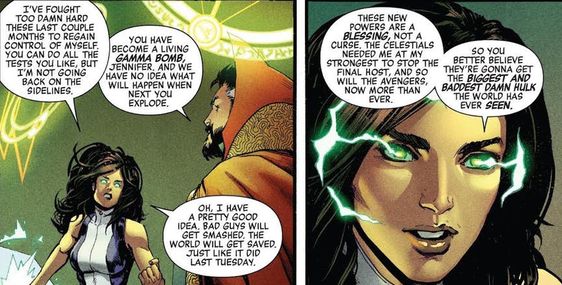 Jen has seen a lot of changes over the years. She turned into Grey She-Hulk after the combined stress of losing Bruce and fighting Thanos triggered emotional reactions within her. She eventually returned to her green form, uniting with Cap and Iron Man to face the Dark Celestials invading Earth.

During the face-off, Avengers find out that humanity was created from the remains of a fallen Celestial and was actually meant to be a cure to wipe out the Horde. However, during this Jen’s physiology got altered again after she made contact with a fallen Celestial, named Eson. Eson connected to her mind and told her about them being Earth’s saviour. However, when Jen returns to the battle, she comes off as more savage than before, speaking like a baby and only interested in smashing stuff.

She also outputs heavy gamma radiation and even uses it to warm Thor at a point. In her giant form, she is literally the biggest Hulk ever. She displays Earth-shattering power-levels but in issue #8, we get to learn that all of this came at a price. After the fight, Jen’s body is totally different. It’s still uncertain if this change was already in works before she met the Celestials or if it’s a side effect of Eson’s cosmic energy.

Doctor Strange runs his scientific and mystical tests on her and finds out that her gamma count is really high, explaining why she’s outputting more radiation than usual. He further adds that her power levels dare more explosive than Bruce and even mentions that if she crosses the threshold, he doesn’t know what might happen to her or her surroundings.

However, Jen does promise to be responsible with her new powers but Strange still seem concerned with cutting her loose. A part of Strange still wonders if this is simply a part of her evolution. Nonetheless, she assures him of her safety, even promising him to be “biggest and baddest” Hulk ever. Well, only time will tell.