Doctor Fate is a powerful character in the DC Universe among the many other mystical beings in DC. Magic of course has its issues and even Superman is vulnerable to the same.

Doctor Fate has a variety of powerful objects that give him many abilities to face any threats. Marvel too has many cool characters who are always ready for a fight! Had Doctor Fate gone against these Marvel heroes, they would surely lose!

A demon once posed as the real Satan and had two kids with a human. One of them was Daimon Hellstorm who is popularly known as Hellstorm. He has been given the nickname of “the son of Satan” and even rules a dimension of Hell. But surprisingly Daimon fights for the good guys!

His spells can successfully manipulate mystical energies thanks to the intense powers he has and a trident to focus them. But he is not powerful enough to go against Doctor Fate. If they ever go against each other, Doctor Fate would come out as the winner!

People call Blade only when it’s time to hunt down some vampires. We all know that Blade was born, raised, and even trained to do so and he’s so good at it. But considering the people he works with and against, he is not good at dealing with so-called “mystical threats”.

Of course, Blade would never say no to a challenge and would give his best against Doctor Fate if he thought he was a threat. But Blade sadly doesn’t have much to defeat him! 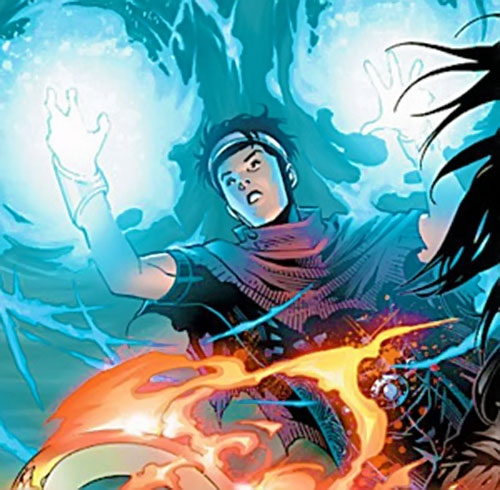 This Marvel hero has Scarlet Witch as his mother but Wiccan’s powers should not be underestimated either. We don’t exactly know what is the source of his powers though.

Wiccan can wrap reality this further allows him to perform some incredible things but he has a disadvantage too. He has to be able to hear the spells to make them work. He is a kid but does have some amazing abilities. But maybe he is too young and not at par with Doctor Fate.

Nico is a member of the “Runaways” and began her heroic career with her friends by running away from her evil parents. She has a lot of potential but has never received any kind of training. Nico heavily relies on er “Staff of One” to create spells but is not always successful to repeat them. This leads to her creating unwanted and strange ones.

Doctor Fate can easily defeat her, but maybe he can be a great mentor to her as well. With guidance like his, Nico could do wonders in Marvel Universe.

There’s no doubt that Thor is a powerhouse and an important member of the Avengers. It doesn’t matter whether he has his Mjolnir or not, he can always be a threat.

Thor’s powers are mystical in nature. But considering Doctor Fate’s abilities could still overwhelm the God of Thunder. Despite his powers, he would have a tough time taking Doctor Fate down. But the possibilities are always open in the future!